Google Spotlight Stories teams with Reel FX to debut new VR short that builds on the Mexican director’s past work from ‘El Tigre: The Adventures of Manny Rivera’ and ‘The Book of Life.’ 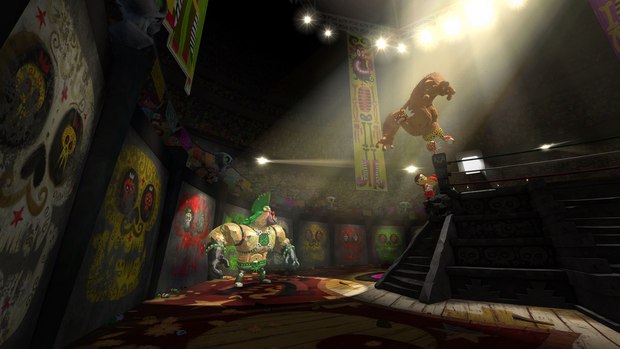 ‘Son of Jaguar’ © 2017. All images courtesy of Google Spotlight Stories.

Google Spotlight Stories’ latest virtual reality short, Son of Jaguar, rolled out this week on Google’s new Pixel 2 phone. A version for Google Daydream and Steam for HTC Vive will be available by the end of the month and, later this year, it will be released on the Google Spotlight Stories app on Android and iOS.

First introduced at Annecy 2017, Son of Jaguar had its world premiere at Cuernavaca, Mexico’s Pixelatl Festival and was on view both at SIGGRAPH 2017 and during this past weekend’s ANIMATION IS FILM Festival. Director Jorge Gutiérrez and the rest of Google Spotlight Stories team will also be presenting a making-of the VR short along with demos at the CTN Expo in November.

The eight-minute first-person narrative thrusts the viewer into the central role in a Mexican wrestling-themed animated short that builds on the director’s past work from El Tigre: The Adventures of Manny Rivera (2007) and The Book of Life (2014), both of which earned the director Annie Awards for character design. For his first foray into virtual reality, Gutiérrez re-teamed with Dallas, TX-based animation studio Reel FX, reuniting with the crew from The Book of Life, including art director Paul Sullivan and character designer Sandra Equihua, as well as the Reel FX animation production team.

​Son of Jaguar’s emotional story is set in the world of Lucha Libre wrestling and follows a family man and the son of famous wrestler Jaguar, who is going into the ring against Lord Calavera, despite having lost a leg in a prior match. In the most important match of his life, the once mighty masked luchador, Son of Jaguar, faces his legacy, his family, and what it means to be a part of something bigger than himself. The viewer is present as Jaguar, the ghost of the wrestler’s father revisiting his family on Mexico’s Day of the Dead.

Gutiérrez explained that when he first got involved, “[Executive producer] Karen Dufilho and everybody at Google Spotlight Stories told me the worst thing you can tell anybody creative: ‘Do whatever you want.’

“I have to admit, I was very skeptical of VR, like a lot of people, but eventually, I said, ‘I’m a coward if I don’t jump in,’ and so, I just dived in,” he says. “And sure enough, I found it to be incredibly difficult to give up two of the swords that filmmakers are used to wielding, which is framing and editing. So that was very hard.”

Gutiérrez started watching movies like Birdman, which was shot as one continuous take with no cuts, in order to learn how direct without traditional editing. “What I came to terms with was, we’re basically making animated plays. The audience can look wherever they want. It’s like being on a stage and watching someone. Everybody in the audience is sitting in a different seat, and they can all turn their heads wherever they want.” But that’s just one limitations of working in virtual reality. Gutiérrez said that throughout his career, he’s learned to embrace limitations and try to find a way to work them in to the story.

“My favorite thing, as an artist, is to be given limitations,” he said. “And as time has gone by, I’ve realized that the things I thought could be a weakness have turned out to be my strengths.”

One of the key technical limitations is the fact the VR experience has to render on a phone in real time.

“And so, we have to be really smart about it. If we try to do the usual aesthetic, especially for me, what I’m used to in a feature film is impossible. So I had to go back and ask myself, ‘Okay, how can I make the limitations part of the story?’” explains Gutiérrez. “So, when you see Son of Jaguar, what the visual language is telling you is, he’s poor, and so, he’s made out of polygons, because he can’t afford to be smooth. His wife comes from a good family, so her face is smooth, but her clothes are all polygons. So, by taking advantage of the limitations, we’ve made it into a story point.”

Gutiérrez recalled that putting on a virtual reality visor for the first time reminded him of a Mexican wrestling mask, transforming him into a larger-than-life character in a surreal world. “And so that was my entry point with Mexican wrestling.” Another limitation that he was warned about was the Swayze Effect, where viewers in VR feel like they’re a ghost with no tangible relationship with their surroundings à la Patrick Swayze’s 1990 fantasy film Ghost.

“So I said, ‘If that’s the thing that people are complaining about, I will make that what the short is about. You are a ghost. And you’re a Mexican wrestling ghost! You go in there, and you’re visiting your family.”

The director added that you can’t really storyboard a VR narrative, but he did start with a script. “There were certain things that I was told you can’t do, like move the camera, and cut, which we ended up doing anyway. But it’s been a really complicated learning process. And unfortunately, for a lot of it, you have to make it, build it, see it not work, and then adapt. And we’re in animation, so we’re used to figuring it out on paper before we get that far, so that’s what’s been really chaotic.”

Throughout the process, he was constantly pushing the tool set and the team at Reel FX to do more, “breaking things and rebuilding daily and getting stronger,” he says.

“And, obviously, those guys have gone through 10 of these films. So, I joke that we’re building a ladder out of the cadavers of all the mistakes we’ve made.” Gutiérrez said that they designed the shots around the idea that grids, subtly introduced in the set design, help to ground the audience and prevent motion sickness. “So in our show, you start in a really crammed space. There are grids on the ground, grids on the ceiling. Usually it’s for people who are watching in VR for the first time.”

“I’m of the belief that, an environment is a character,” he adds. “And then the environment itself is telling you, ‘These guys are in trouble.’ It’s like the saddest room you’ve ever been in. And you go from this really claustrophobic space, where our wrestler hero can barely fit, down this hallway, basically, the tunnel to decide what’s going to happen with the rest of his life, [toward] the light at the end of the tunnel.”

The tunnel leads him into the wrestling arena, a vast, loud and colorful space that relieves any sense of claustrophobia. “Hopefully, when you walk in, it’s a very overpowering moment. People are going to throw trash at you, the lights get turned on, and it’s like a gladiator walking into The Colosseum,” says the director. “So all of these environments are helping tell our story, and again, we’re taking advantage of VR, because in a linear theatrical movie, we’re cutting and letting you, sort of breathe the moments. Here, it’s up to you. And you take it in the way you want.”

Gutiérrez drew on some very personal themes for the subject matter. Aside from the fact that he admits he always wanted to be a Lucha Libre wrestler, he explained that he now has a child, “and I can’t take the risks that I used to take creatively and artistically. That responsibility, will that take me out of the ring? Will it cripple me because I now have someone that depends on me? And is that a burden? That’s a theme and topic that a lot of artists, I think, wrestle with.”

The director said that the most enjoyable part of making the film was “being able to walk into my head and being able to hang out with my characters and walk around them and see them. As a kid I dreamt of this stuff, and now I get to do it,” he says.

“I always joke about this, but I was the little kid who would go see an animated movie, I would run up at the end of the movie to touch the screen, just to try to get in, because those worlds seemed so incredible.”