A phone call ends a secret romance, while images of feudal Chinese combat provide a poignant landscape in this beautiful and imaginative short film. 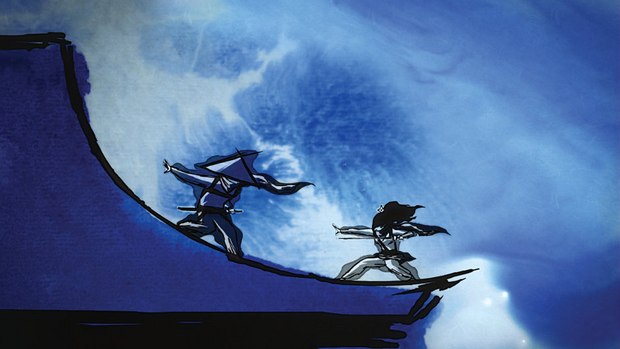 In Canadian animator Jonathan Ng’s Oscar-shortlisted film Requiem for Romance, two young lovers break up over the phone.  But this is no tale of modern romance gone awry. A stunningly beautiful animated landscape of imagined hand-to-hand combat between the couple, set against the visual backdrop of ancient feudal China, this film speaks of love, duty, cultural identify and the pressures of family. With swordplay and throwing stars.

The director shared some thoughts on the genesis of his film as well as the challenges of bringing his vision to life.

Dan Sarto: How did this film come about? What is the genesis of the story?

Jonathan Ng: I was just coming off a two year period where I had been focusing a lot on film history, film theory and writing for film. I had taken in a lot of films from different periods of Chinese cinema, including the water ink animations from the 60s, martial arts action films, and love stories, all of which resonated with me. I felt that there was going to be some way for all of them to intersect through my independent animation. I thought back to an original script that I had previously written about a break up and had put on the shelf. I re-read it and still thought it had some potential, and decided to embark on bringing it to life. DS: Why make this film now as opposed to any other stories you were developing or considering?

JN: I saw it as an opportunity. Artistically, it was a chance to expand and change from visual styles of my previous films and a chance to explore a different storytelling structure by way of contrasting parallels between the audio and visuals. The water ink under camera technique was something I was innovating and I really wanted to try it out and have fun with it. I hadn't ever explicitly explored East Asian aesthetics in my work before. The feedback from funding organizations on my script was very positive and I eventually received the funding to do it. Everything just came together, with the visual inspirations to work with, the story meaning something to me on a personal level, and having the resources to do it properly. So why not? As a creator, you're always going to have 2 - 3 or maybe more ideas in development, but life will let you know when it's the right time to realize a particular project.

DS: What is the film about? How do you hope it resonates most with audiences?

JN: The film is about a phone call break up intertwined with art, culture, and martial arts accented by themes of tradition, distance, and intimacy. I also hope that the film can resonate in other ways, similar to that of a song, whose storytelling lyrics contrast with dramatic instrumentals, or as a fight choreography that expresses a love tango. A color coded sequence of moods reflecting on the different stages of acceptance. In the end, I hope that the audience feels the emotion and that they can relate to it in some way. DS: How long did it take to produce? Tell us a little about how you made the film.

JN: A year and a half of production time but if you include the time it took to finance and write the script probably brings it to about two years. Aside from me, the animation crew had six people, on a part-time basis, with tasks ranging from inbetweening, color fills, highlights and compositing. The main techniques used were under camera ink footage, hand-drawn animation on Cintiq, and digital compositing. DS: What were the main creative or production challenges you faced making this film?

JN: Balancing my time was the most challenging aspect, because I continued to work freelance on a variety of other projects. This was partly because the funding was mostly back ended so I had to put up the interim financing myself. I try to balance 50% of my time on my own stuff, and 50% goes to work for hire. It was a huge undertaking, but overall, I feel that nothing really major went wrong, as everyone worked hard on the film and I just enjoyed every aspect of the production, from filming the ink, to drawing frame by frame, to directing the voices, music and sound, tightening the edit, to final output and color correction. Handling all the producer duties, promotion and marketing aspects, were somewhat new to me, but I enjoyed them as well because I learned a lot.

You can find more about the filmmaker on his website.

An Interview with Priit Pärn
‘Baymax!’ Provides an Rx for Humor and Compassion
How Digital Domain Brought Photoreal Characters to Life in ‘The Quarry’
SCAD GamingFest: Building Shared Story Experiences with Diverse Character Design
Mission Critical: ‘Lightyear’s Journey to Infinity and Beyond
Putting the Fun in Dysfunction: The Non-Humanistic Therapy of ‘HouseBroken’
‘The Freak Brothers’: This is Your Humor on Drugs
END_OF_DOCUMENT_TOKEN_TO_BE_REPLACED