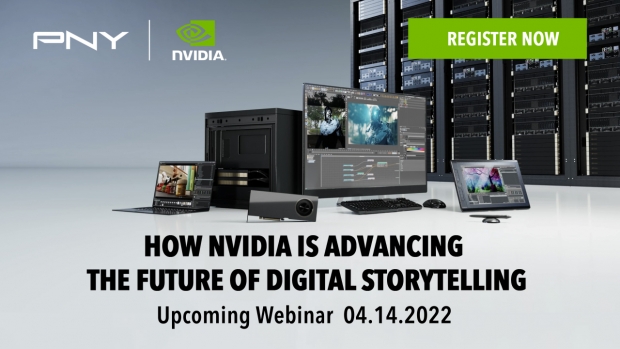 PNY and NVIDIA have just announced their upcoming one-hour webinar, “How NVIDIA Is Advancing the Future of Digital Storytelling.” The free event, which includes a live Q&A session, will take place April 14 at 12:00 pm EDT / 9:00 am PDT.

“This webinar will focus on how NVIDIA RTX professional graphics is enabling new means of digital storytelling through things like virtual sets, real-time rendering, and cinematic-quality ray tracing,” says Flygare. “Technologies like NVIDIA vGPU and Omniverse Enterprise are allowing VFX professionals to collaborate remotely in ways that are way beyond anything that could be done before.”

Describing the new paradigm as something like a “digital backlot,” Flygare emphasizes that the webinar will delve into the nuts and bolts of what it takes to create and work in a virtual set, including a close look at the hardware involved.

“We’ll be talking about using cards like the NVIDIA RTX A6000 or A5500 to drive the LED panels on a virtual set,” he says, “as well as reviewing the recommended NVIDIA RTX Ampere architecture boards for use in a Media & Entertainment context. We’ll explain how the new systems relate to graphics creation, character animation, scene creation, applying texturing and lighting effects. The fundamental point we hope to get across is that NVIDIA RTX and NVIDIA's Ampere architecture are the best GPUs yet devised for artists committed to telling a story and engaging an audience.”

As an example of the exceptional capabilities of the latest technology, especially in conjunction with AI, Flygare talks about how, in the past, something like an explosion in space didn't really take into account the laws of physics or the fact that this was happening in a vacuum.

“In the past, the artist had to handle it as best they could, with varying results,” he explains. “Now, with photorealistic ray tracing, artificial intelligence – which can de-noise and really reduce the time needed to get a frame-ready render – along with simulations that really do model the behavior of different physical environments, you can do things with a degree of fidelity that was unimaginable before.”

Equally importantly, by implementing NVIDIA RTX and the NVIDIA software ecosystem that surrounds it, a studio can help ensure that it remains competitive.

“You need the latest tools to keep you in the game, or you won't be able to compete,” Flygare says. “Your costs will come in too high. Project lead times will be far too long. The end-product simply won't measure up. The Media & Entertainment workflow is changing like never before. And NVIDIA RTX technology and associated platforms like Omniverse Enterprise, real-time ray tracing, AI, and physically accurate simulation will let you do things that simply were beyond your creative reach before. Or, they can now be done at a cost point that lets you bring them to a wider diversity of clients than ever before.”

Attend this free webinar to learn about: