With a new movie launching today on Netflix, the iconic Nickelodeon series’ creator and his evil extraterrestrial conqueror are back, bringing a ray of horrific animated sunshine to otherwise dark times. 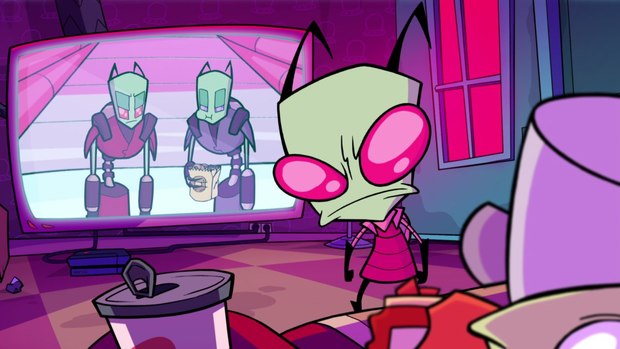 When Invader Zim ended its rather tumultuous initial run on Nickelodeon back in 2002, few in the industry were surprised. Skewed towards older kids, creator Jhonen Vasquez’s wonderfully and horrifically weird series seemed an odd fit at a “children’s entertainment” network. Perish the thought creative sparks might fly! Despite controversy and network handwringing, and quite possibly, because of it, the show generated critical acclaim and a rabid fan base.  In a short time, Invader Zim successfully captured the hearts and minds of an impressionable audience that, contrary to what family entertainment guardians painstakingly championed, was filled with quite a few obnoxiously disaffected and completely bored kids just looking for that certain “something” a sinister cartoon character could provide them. That’s still true today, though courting (i.e., exploiting to malevolent extremes) that audience has now become as acceptable as stirring iced Chai lattes with plastic straws while traveling to climate change fundraisers on private jets. Lest we forget, it’s all about the children.

So, here we are, 18 years after the infamous debut of the now famous series, and what was once old is miraculously new again; Vasquez, and an evil extraterrestrial named Zim on a mission to conquer Earth and enslave the human race, have returned, thankfully, ghoulish cackles and all, in a new 70-minute romp, Invader Zim: Enter the Florpus, released this morning on Netflix to a new generation of eagerly impressionable and potentially even more disaffected youth of today.

AWN had a chance to speak with Vasquez about the tumult surrounding his original series, juxtaposed against his celebrated and eagerly anticipated return to sacred animation ground almost 20 years later with the new film.

Dan Sarto: How did the idea for Invader Zim originally come about?

Jhonen Vasquez: I was walking down the street, or skipping really, and this huge limousine drives up and keeps pace with me the way they do. A window rolls down and a woman called out to me from the back of the limo… she said “Hey, kid, you want a cartoon show?”

Like most kids, I was told not to accept cartoon show offers from strangers, but I had grown bored with everything and wanted to invite nightmares and depression into my life. So, I gave the woman a thumbs up and started running at the limo. Something in my thumb must have upset the woman and she rolled the window up but not quickly enough because half of me made it into the limo and the rest is history. I had myself an animated series and Nickelodeon had themselves a headache.

I realize now that that didn’t answer the question. DS: Your series was a huge fan hit, arguably ahead of its time – the controversy over the show seems so minor now compared to what people rail on these days. Looking back, what frustrated you most about the original series run and do you think those challenges would even be issues today?

JV: Not that I was psychic or anything, but I think I shared some of your assessment there, that nothing we were doing was going to bring about the end times. Frustration came from my certainty that any overreaction to the content of the series was just that, overreaction and that there were way more terrible things in the world to stress over. That’s kind of the show all around though, people freaking out over really silly stuff and it being treated as if it’s the end of the world (which sometimes it IS but still…)

DS: What went into the decision to make this new movie for Nickelodeon and Netflix? And does this potentially mean any new Zim episodes in the future?

JV: Different frustrations were responsible for the movie getting made. Some form of Zim revival was always circling me like ravenous wolves, but I kept a safe distance until a couple of years of wasted in development time on another project made me want to work on something that would simply get made. The Nickelodeon I dealt with for most of the movie’s production was incredibly supportive and enthusiastic, a complete change from the Nick I worked with long ago, but that’s not all that unusual for the stat of any Zim project.

As for any future Zim series stuff, I can’t say. There has always been talk, but like all things Zim, company interest runs hot and cold and I’m always interested in doing new things that aren’t necessarily Zim so I’m not nagging anyone about that. DS: What can you share about the production itself? How big a team? Who did the animation? Main tools? Anything particularly cool to share with an appreciative artistic audience?

JV: Tiny team, fairly tiny overseas studio as well. Stateside, we were just this tiny crew tucked away in a corner of the 4th floor of the animation studio where some other productions were winding down. So, it was kind of desolate and spooky besides our crew huddling together for warmth.

I tried to have as many of the crew in-house as possible because it’s always better to be able to loom over people and shriek so there’s a real connection and you’re not just dealing with artists remotely, though we had a few remote freelancers as well out of necessity.

Later, the new TMNT crew filled out the other half of the floor and we were struck by what a much bigger production was like, hearing their laughter and joy as we, towards the end of the production, tried desperately to remember things like hope and food.

DS: How much of the previous design work was used in the new film? Any significant changes in how you designed the new production?

JV: Everything was pretty much redone from scratch with not a single thing simply transplanted over from the series. But, it was more of a revision than a complete redesign. It was a lot of experimenting to keep things interesting, mainly, treating the movie like a pilot more than anything. And, as with any pilot, it would inform any directions I’d take with any following Zim work. Looking at the movie as it turned out, I definitely have ideas for what worked and what didn’t work, and a lot of that is visual. The movie is a bit squishier whereas the series was much more angular, and given the chance, I’d dial back on the squish and up the harder edges. DS: What were the biggest production and creative challenges in the project?

JV: Production challenges were mainly in the boarding and making sure that the attitudes were right for these characters. Working with new board artists is like bringing in entirely new actors when people are used to the old actors. I’m not talking voice actors either; board artists are the ones who bring those characters to life in so many ways, defining how they will move across that screen, what expressions they will make while they do this or that, and it was the most work for everyone involved to get the boards to a place where it felt like Zim. Zim’s pretty demanding on everyone who works on the show; it’s not just the actors who are screaming all the time.

DS: As a creator, what does it mean to you personally to bring your iconic show to a brand-new audience?

JV: It means a lot, actually! One of the biggest draws of doing the movie was in doing something different and hopefully getting different eyes and brains to react to it. It’s great to hear from fans who already like the show and comics, but there’s just something MORE to hearing someone who has just found the show or even from people who didn’t like the show but maybe will like the movie. I always made the show for people who, like me, grew up or are growing up loving science-fiction and horror and absurdist comedy, and that’s how I want people to see the show and movie and comics more than anything else.