Filmmaker Nick Peterson and Velorean Productions take the platinum-selling singer and his friends on a drunken, superhero hula dancing adventure. 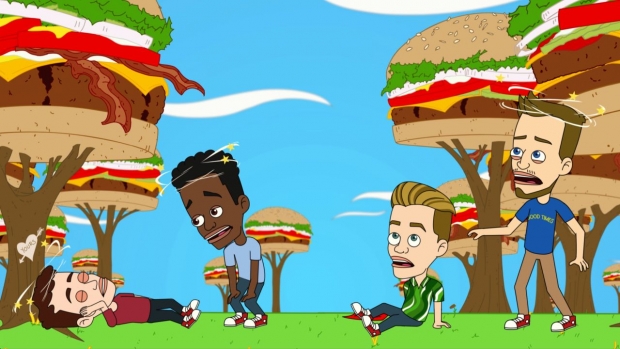 For McCartney, with the COVID-19 pandemic making it impossible to film a music video, he quickly embraced the idea of producing an animated piece for his latest single. “Given the circumstances, we knew it would be impossible to assemble a crew and shoot your typical music video,” the pop singer explains. “I had always wanted to do an animated video and so this felt like the perfect opportunity.  After brainstorming with my very talented directer, Nick Peterson, we landed on an idea that would follow me and some of my buddies getting drunk at the bar, turning into superheroes, and dancing on an island with hula girls. Why not? Anything is possible with animation, right?”

McCartney enlisted some old acting buddies for the video’s live-action setup. “I knew I wanted a group who could act since the beginning of the video would have dialogue before we’d be transported into our animated world,” he notes. “My first thought was to ask some of the other cast members from Greek, a popular TV show on ABC Family which I was a part of in the mid-2000s. I’ve stayed friends with them over the years, so I texted three of them that day and they responded excitedly within the hour.  We ended up shooting the following week from behind our laptops and from the comfort of our living rooms.”

“In light of COVID-19, we wanted to do something that would make people smile and perhaps bring a bit of Nostalgia,” McCartney adds. “I think the video does all of these things.  I’m so happy with how it turned out and the animation is really spectacular.”

Though no stranger to animation, Petersen primarily directs live-action commercials and music videos. “I love doing animation whenever I can, so when Jesse mentioned he wanted to do this video animated, I was really excited,” he shares. “I contacted my buddy Eric Calderon to see if he had any recommendations for studios and he put us in touch with Velorean Productions in Arizona. Velorean was absolutely fantastic to work with. I think initially they were a bit afraid of working with a live-action filmmaker; I think it’s quite wise to be afraid of live-action directors attempting animation…it really is a different world. After explaining my concept and approach to the project, Velorean felt comfortable enough to move forward.”

“Writing this music video was so much fun,” the director continues. “In-live action, I have to really pay attention to make sure I stay within certain boundaries of reality in the story. But for Jesse and his friends, this journey opened up a whole fantastic world which I think plays to the unique strengths of animation. The idea here was to keep it fun!” Once McCartney approved the script, Peterson created rough storyboards and an animatic timed to the song. Velorean then took the rough boards and created “real storyboards and a far better animatic.” “They smoothed out all the rough spots, and added additional visual gags to the piece,” Peterson says. “They also took Jesse’s ideas for a ton of Easter eggs hidden throughout the video. I think it will take fans with a very keen eye to find them all!”

Constrained by a tight schedule and budget, Peterson and Velorean chose 2D puppet animation rather than more complicated hand-drawn 2D. “Velorean was more than happy to accommodate the style choice, and animated everything in After Effects,” the director reveals. “The whole project from ‘Go’ to final animation delivery took eight weeks. Once I got the animation back from Velorean, I cut it in with the live-action portions of the film and added some sound design to bring the whole thing to life. In the end, I loved making this video. Working with Jesse again was a pleasure and the team at Velorean was such a great experience I hope to do it again with them very soon!”

McCartney’s first three albums - the Platinum Beautiful Soul (2004), Right Where You Want Me (2006), and Departure (2008) - consecutively bowed in the Top 15 of the Billboard Top 200 with the singles “Beautiful Soul” minted Gold and “Leavin’” certified Platinum. SPIN touted In Technicolor among its “Top 20 Pop Albums of 2014.” He has performed in arenas alongside artists like New Kids on the Block and Backstreet Boys in addition to packing global headline tours and hosting shows for both George W. Bush and Barack Obama. A sought-after songwriter, he notably wrote the 4x Platinum Grammy Award-nominated “Bleeding Love” for Leona Lewis. In 2018, the one-off single “Better with You” racked up nearly 30 million cumulative streams and paved the way for his fifth offering. Simultaneously, his acting credits grew to include everything from Chernobyl Diaries and Fear the Walking Dead to Alvin and the Chipmunks; he also voiced the character Roxas/Ventus in gamer favorite Kingdom Hearts.