Javadoodles: ‘Talks Over Drinks’ with Friends in Funny Animated Shorts 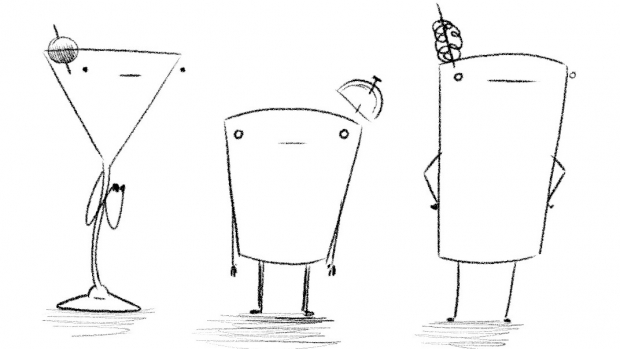 Social media, and its ever-changing algorithms and constantly increasing number of new platforms, can be a real pain. But every now and again, these changes can prove innovative for animators who want to “self-publish” so to speak, and get their work out there separate from a studio.

For almost 10 years, the animator known on social media as “javadoodles” has worked in almost every role of animation, from character designer and prop designer to background painter, storyboard artist and After Effects compositor. She’s worked on 2D and 3D animated promotions, shorts, features, and television. But it wasn’t until the pandemic that she began creating her own animated content.

“Everything was shut down and I needed something to do to just stay busy and productive,” says javadoodles. “So, I started a TikTok.”

But the art that inspired javadoodles’ animated shorts goes all the way back to 2015.

“I started a Tumblr account with the drawings I used to make on coffee cups at this place called Java Wally's in Rochester during my time between classes,” explains javadoodles, whose coffee drawings were highly detailed, colorful illustrations of cartoons ranging from SpongeBob SquarePants and Timmy from Fairly OddParents to Groot and various Pokémon. “Those posts kept getting re-pinned, so then I started making little comics, which then turned into little animations during the pandemic.”

One of javadoodles final coffee cup illustrations was of Tuca & Bertie before she began a new, entirely different chapter, creating comics out of incredibly simplistic illustrations of blank coffee cups and filled cocktail glasses. “They’re really simple shapes, but there's a lot you could do with a drink; you could have a different shaped cup or a little straw with accessories. Those details set them apart from each other. I just try to have a good time with it.”

The little cartoon cup characters began as still-frame images, some original, others mimicking common pop-culture memes and visuals, such as the “This is fine” dog surrounded by a room on fire. Then they turned into conversational comic strips, then single-frame animations. In March 2021, javadoodles started creating animated shorts with her characters.

“I kind of stalled on Instagram at 10,000 followers because I wasn't sure if I wanted to do the coffee cups anymore,” says javadoodles. “I had done the same thing for a long time but was starting to get bored of it. I was trying to figure out what was next, then Instagram introduced video. And then TikTok was just a perfect medium because it was under 60-second videos. I was like, ‘Oh, these could be really short. That can be really fun,’ and I just took trending sounds and made little cartoons with them. They would do so well, and people were like, ‘We love these. We want more.’ It was really encouraging.”

Now, javadoodles’ animations can be seen on TikTok or Instagram and YouTube where javadoodles is now approaching 1 million subscribers. The animations began with audio pulled from TikTok, such as a kid asking for someone to order them a pizza, but then the animator started accepting audio submissions.

It’s not embeddable – check it out here: https://www.youtube.com/shorts/cGAmtRdQx_w People would share childhood memories, philosophical thoughts on life, and funny stories from family vacations. But one of javadoodles personal favorites is from this past February, when her friend sent a casual audio message about their earliest childhood memory: a nightmare staring Barney.

“She just sent that to me out of nowhere, actually,” explains javadoodles. “And I was like, ‘Hey, do you care if I make this into an animation?’ So that was a very spontaneous project.”

The animator also collaborates with comedians, like Kevin James Thornton, to do animations of their autotune story ramblings. Javadoodles admits that, lately, Thornton’s been the “star of the show” on her videos, her animation about the comedian’s childhood incident with an adhesive-side-up maxi pad having over 14 million views.

“Everything he says is so funny and he paces everything really well and it's all coming from a very genuine place,” says javadoodles. “His stories go really well with my animations, and the autotune makes it like a song that you're listening to. So, we've been really fun collaborative partners over the last couple years. I would love to cast him on a TV show, if I ever had my own show of these characters.” Collaborating with Thorton has not only helped get javadoodles animations even more audience members but has also helped expand the animated universe with adult Thorton, childhood Thorton, his mother and grandmother all recurring characters.

“I try to make sure the continuity is there,” says javadoodles. “I give everyone their own character and stay on the right timeline. There’s a pierced fruit on top of Kevin’s drink that’s always there for his adult stories and you can see, on the ones where he’s eight years old that piercing isn’t there.”

In a time where animation technology is reaching ever increasing new heights and there seems to be a race for who can create the most eye-grabbing, innovative animations, javadoodles approach goes against the current. There’s little to no color, barely any shading and the lines are imperfect. But humans are imperfect, their stories imperfect and, just like the ample amounts of white space in javadoodles animations, when people bear their souls on TikTok videos, there’s nowhere to hide.

“My backgrounds are all kind of in a white void because I’m really focusing on the character,” affirms javadoodles. “I want it to feel really relatable. I want it to feel like you're just hanging out with a friend. And I love to zoom into their eyes and then change the background color to black because then it's like you're in their head.”

And the irony is not lost on the animator that her shorts are literally “talking over drinks” with friends.

“That’s totally spot on,” she says. “Everything's so focused on who can create the most realistic animation or most CGI-advanced version of this movie. It is really cool to be able to do that but, for me, I'm focused on creating the weirdest, most ridiculous story and keep it really simple and make it adult animation, but also keep it cute, at the same time. I just want to make people laugh. I want to tell funny stories. And I want to get into the adult animation space, because there aren't enough women in there.”

Though there’s not much she can say about it yet, javadoodles has big plans to break into the TV scene with her animated shorts and is excited about the opportunities on the horizon. “I plan on building this as much as I possibly can,” notes javadoodles. “I actually incorporated this year into an LLC, so if I want to bring on a freelancer to help me with an animation, I could. I've been doing some projects as ‘javadoodles,’ like for the podcast Podcrushed and for different studios, so this is kind of becoming its own little studio.”

But javadoodles biggest goal with these animated shorts is to pave a more welcoming path to other women animators who want to break into the adult animation sphere.

“There's not a lot of adult animation that's pulled by women,” says javadoodles. “I think there's been some progress with shows like Tuca & Bertie, which has been one of my biggest influences, but there's not a ton out there like it and that makes me so sad. So, I want to contribute.”