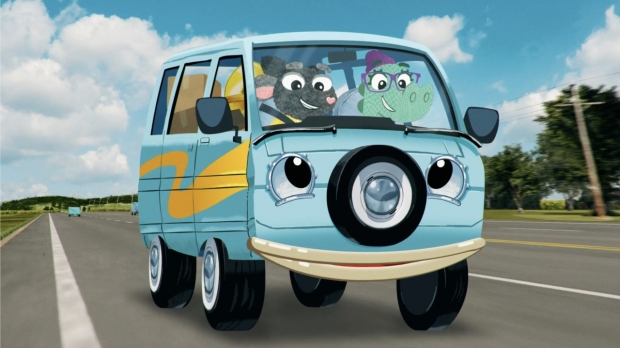 From interactive gameplay and narrative projects like their Kidscreen Award-winning Scribbles & Ink, to the colorful changemakers on Pup & Cup (still in development), Global Mechanic has produced thousands of hours of content in out-of-the-box animations.

But YouTube’s Jam Van, premiering Thursday, January 19, will be the 22-year-old boutique design and development studio’s most complex project yet.

“As we started to talk about design, it became clear that Bill [Sherman] and Brian [Hunt] both were looking for some kind of crazy, inspired by Pee-wee's Playhouse, punkish collage show which, of course, was music to my ears,” shares Bruce Alcock, a principal with Tina Ouellette at Global Mechanic, and the series director. “There was a real opportunity to flex the muscles and do some crazy stuff. We love hybrid production. We've worked on a whole lot of different kinds of things, and this was an opportunity to really show that skill and play with the design. Because, let's face it, there's a lot of stuff out there that's looking similar for kids shows. But this doesn’t.”

Jam Van, co-created by Hunt and the multi award-winning composer and producer Sherman, is produced by Believe Entertainment Group, Sherman’s Pop Music Misery, Inc. and Global Mechanic. The series follows animated music-loving best friends Lamb (Pete Lee) and Anne the Alligator (Nicole Byer) who travel to new locations around the country, where they meet up with famous live-action musical artist friends like Lin-Manuel Miranda and Brandi Carlile who help them tackle relatable social-emotional learning challenges with the assistance of a new original song they sing together. The series also features the voice of Marc Maron as Grumpy GPS.

Alongside live-action musicians, the hybrid animated preschool series features stop-motion and motion graphics, collage mixed with line design on the main characters, and photographic imagery in the background all wrapped up in a scrapbook, cut-out character aesthetic.

“To combine that many techniques to work with live-action, and integrate it with animated characters, but also radically alter the design style for the music videos, episode-to-episode… we've done that kind of hybrid stuff in our TV commercial work and short films for a number of years, but in a series context, it's unusual,” says Alcock. “You got to get all of these departments to play nicely.” Alcock explains that the narrative components of the show, along with the characters, were all done in Harmony using proxy backgrounds as examples of “pared down” versions of the photography assets they’d gathered. The Harmony team would bring in a basic background, compose the character animation using rigs based on initial photo collages and storyboards, mix in the line designs, then output layered sections that would go to comp in After Effects, where the animation would be paired together with linear photographs created in Photoshop by the background team.

“After Effects is also where we focused on shadows, color correction, and reproducing the camera moves that we roughed in Harmony with tracking marks,” notes Alcock. “And we wanted to make sure that the first boards weren't functional layout boards, but were, instead, suggestions. We pushed the animation team to be inventive, to change it up, if necessary. We needed to make sure that all the people who were working together embraced the spirit of improvisation, as much as you can within a pipeline to actually get a show finished.” For the motion graphics integration, Alcock says the team did a pre-edit of just the live-action in Premiere and then tweaked that pretty heavily in After Effects, bringing in character elements exported from Harmony, photographs from down the street, watercolor paintings, and hand-painted textures. Anne’s alligator scales and Lamb’s wool were textures built in-house by Global Mechanic from a handful of photo texture sources. But there are some secondary characters in the show whose textures are derived from photo texture mixed with paint texture, mixed with touches of line design.

“I always found it surprising how much aesthetics in shows that end up getting broadcast are not as interesting as what young children are exposed to in books,” shares Alcock. “For a while, people avoided doing the storybook look in broadcast because it was a bit stodgy. But that storybook look allows me to bring the texture I love onto the screen. And we put a lot of texture on the screen with this show. I wanted to make sure the imagery was really alive and changing. And vibrant.”

When it came to the photography, especially of the food featured in each of the cities visited by Lamb and Anne, some sequences included copied and pasted images, while others are more stylized with hand-painted textures layered on top of the original image.

“It was a really big variation,” says Alcock. “Some of it was straight photographs that were just cut out. A lot of it was pieced together from multiple photographs collaged together and painted on with texture added. We were kind of in between worlds of this stuff. Yeah, it's photographic. But it is also stylized. It made a design look that seems in reality and outside reality at the same time.”

And the same technique was used when it came to the backgrounds formed in Photoshop.

“In Chinatown during the New York episode, we pieced together photographs from all over the place and rebuilt some things from scratch. The New Orleans backgrounds and music video, in particular, were loads of photographs in the street. But techniques from Photoshop expertise right down to really rough scissor cut-outs slapped together with tricks, made it like an art school fun time.”

The show was as much an exploration of creativity for the team as it was for the characters in their show, with Alcock getting the chance to revisit – and insert – some of his musical roots.

“My background is in music,” he explains. “I started out as a tuba player. I got to know Bill on a show called Sounds Like Me that we were in development on for a while, and we became fast friends. So, I thought, if there's anything we can work on together that really digs into music, that would be great.”

And Alcock’s history with the tuba played a role in the tuba cameos present throughout the show.

“I did prompt the writers to put it in and you'll see a bunch of publicity materials where tubas pop up all over the place,” says Alcock. “It’s a little nod to that part of my life, for sure.” The final step in the Jam Van production pipeline was the stop-motion, which was shot with Dragonframe.

“There was a little bit of comp in that, but we tried to keep it as in-camera as we could just because that stop-motion feel is so great when it's not relying on tricks outside the camera,” says Alcock. “The transition in and out of Lam’s and Anne’s pop-up city book was comped, but other than that it was mostly in-camera.”

Creating a show like Jam Van is an incredibly tedious process, where no detail can go overlooked and where all the gears, or different parts of the animation sequences, must fit together properly for the show work and be effective. With so many complications, why did Alcock, Sherman and the rest of the Jam Van team choose this style when the extra work involved was no mystery?

“It's a really good question,” affirms Alcock. “My producing partner, Tina Ouellette, will often ask me that same question: ‘Why are we making this so complicated?’ It really came out of wanting to do something unusual. In my own work, whether it's my personal artistic work or the range of commercial stuff we do in the studio, I'm really interested in hybrid production and piecing together things that maybe don't match normally. Sure, it makes more work. But I think it makes something more interesting.”

He continues, “There's been a lot of shiny, bubble-gummy-looking 3D stuff for little kids, and there's been a whole lot of 2D stuff, but not an awful lot of collaging, like the people on Pee-wee used to do. [Jam Van] was a pretty radical thing for YouTube to agree to do.” On top of wanting to differentiate their show from the rest of the preschool kids’ entertainment world, Alcock notes that it was also important to build a “snapshot” of the different places viewers are taken to in the series, like receiving a living postcard.

“We really wanted to celebrate each of the places that the characters end up traveling to and make sure there was a really strong vibe for each place that makes each place individual,” he says. “And part of that was honoring the celebrities that were in it and making sure we were making a world for them to live in that was warranted of their time.”

When it came to creating the music videos, the team both planned for in advance and made sure there was flexibility to tend to the tastes of the live-action musicians they hosted.

“We knew we wanted to do some really adventurous stuff with the music videos, and that meant that we had to pre-plan what we needed as elements from the shoot,” explains Alcock. “So, we boarded all the music videos pretty carefully with what we were hoping to do with animation, but also balancing that with what the musicians were willing to do, and what they weren’t willing to do. For example, somebody didn't want to have to ride on a sandwich in the sky, for some reason. So, we boarded it, shot to hit the boards and, like any live-action shoot, we accommodated for accidents, happy surprises, and adjusted afterward in animation.”

The highly tended to but bendable pipeline was complicated, but Alcock believes it attracted the right kind of people to the production.

“In a lot of projects, the pipeline can be about hierarchy,” Alcock notes. “Everybody knows their position and they work according to that position with all the departments separate. It's a well-oiled machine because it works for a regular pipeline. But once you push against a regular pipeline, it gets uncomfortable. So, you need people that don't mind being uncomfortable in that way, and roll with it, and change the way that they work, change the way they talk between departments.”

He adds, “We wouldn't have gotten as far as we did without Bill and Brian giving us the flexibility to really push it. They had the confidence to say, ‘We’ve hired these guys, we think they're great, so we're going to let them do what they do.’ Their notes tended to be minimal and thoughtful. And not income driven.” The production was a big state of play, as Bruce says, under “crushing weight of detail.” But so much of the team has been poured into this show with love and fun antics that reflect in the zany personalities of the characters.

“These are really touching stories,” he notes. “And they're funny. I just hope it sticks out and people want to see more.”

While Alcock is credited as the overall show director, and episodic director of 101 (Philadelphia) and 102 (Nashville), he and the team would like to highlight the three first-time episodic female directors. Their names and corresponding episodes are listed below:

Choc Chip Animation Riffs on Pop Culture in ‘The Art of Murder’
F is for Flake: The (Not So) Great Animation Robbery?
Re-VIEW: ‘Avatar: The Way of Water’ – A Miraculous Vision
‘Kung Fu Panda: The Dragon Knight’ Celebrates a Special Lunar New Year
END_OF_DOCUMENT_TOKEN_TO_BE_REPLACED