Izabela Plucińska: Changing Fate with Your Own Hands

The Polish stop-motion animator discusses working with plasticine and her most recent, and challenging production about a bulimic and perverted man who obsessively identifies his lost love with his left foot. 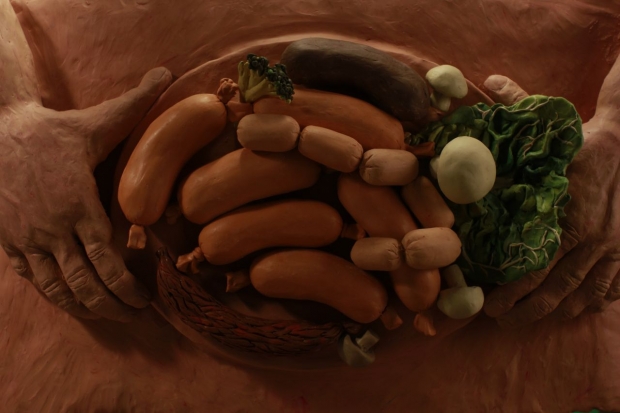 Sinking your hands into the clay, modelling, and squeezing it, feeling the sensuality of the manual manipulation, is a gratifying and creative sensation. Showing the plastic substance fluidly filtering through fingers and shaping it into the semblances of characters and sets, sharing the perceptions with viewers, is about artistic film skill. Merging technique and poetics, animation and narration, expressing with moving images one’s own moods, anxieties and desires or surrealistic stories and morbid visions of other authors out of the chorus like Topor, pertains to the original art of animator Izabela Plucińska.

Her most recent film, Portrait of Suzanne (2019, 14’53”), based on a 1978 novel by Roland Topor, tells the story of a bulimic and perverted man who obsessively identifies his lost love with his left foot. Right from the opening, the eye is plunged into an ambiguous atmosphere, uncertain between a swinish sottish expression and the actual pinched and released belly around its button as big as a mouth. The protagonist’s hands grasp with anguish and self-despise, just like an artist manipulates and models soft clay.

The recent 39th Bergamo Film Meeting dedicated this year’s retrospective of authorial animated cinema to Plucińska. The stop-motion filmmaker learned and developed her art first at the Film School of Lodz (Poland), and then at the Film University Babelsberg Konrad Wolf in Potsdam (Germany) where she graduated with the short film Jam Session (2005, 9’31”). Based on the theatrical play by Maciej Zenon Bordowicz, Jam Session was awarded the Silver Bear for short films at the Berlinale. In it, one of her recurring themes is outlined with straightforward sensitiveness: the difficult relationship in the couple undermined by boredom, habit, rigid routine that can, however, be revitalized by something unexpected as a gust of wind, or some penetrating music from outside.

Plucińska spoke with the author about her latest, and most challenging, production.

Lawrence Thomas Martinelli:  Since your first shorts as a student in Lodz to your more recent works there has been a constant growth in poetics, style and technique. Which are the key passages of your artistic itinerary?

Izabela Plucińska: Thanks to the developed, special way of animating (my dolls are lying on the glass, the camera is above the glass), I manage to achieve the effect of smooth blending of colors and even "painting" with plasticine. My films are mostly about relationships between body and clay. In fact, in all my films there appear similar situations, objects, like a mirror, a newspaper, a window. The reason why I make stories with clay is simple: I want to show the work as strongly moving, sensual, corporeal, bodily, perfect for representing in plasticine. LTM: What has shifting to Germany added to your animation?

IP: I started studying in Germany, Babelsberg in 2003, when digital cameras were just starting for animation. At the film school in Lodz, I only worked with 35mm film on old cameras. We were editing 35mm film. The new technology brought about a different approach to set creation, background, editing and animation. A lot has changed. The new technology has given us more options. Sometimes there is so much that you can get lost. I'm glad I could compare the 35mm film with the new digital Canon Eos.

LTM: From Bordowicz to Topor, and among animators starting with Švankmajer, how have you been inspired so far?

IP: Švankmajer is my master so far, I really like his magic and his political and social references. I like very much the unusual animations by Bruce Bickford made of plasticine and set to music by Frank Zappa. His animation shows constantly evolving shapes, images, madness. Certainly, the history of Polish animation, which is very rich, is important to me. I know very well the works of Jan Lennica, Walerian Borowczyk or Zbigniew Rybczynski.

LTM: How does a physical approach to materiality (the clay you touch and model) affect your filmmaking?

IP: Working with plasticine many hours a day I have to be relaxed. So it is a therapeutic activity. You have to be in a good mood, disconnected from everything else, brave enough to focus on macro movements. It's about creating movement, observing it, and having fun.

LTM: Music adds a crucial tone to your films, from tango and folk ballads to blues and rock. How do you choose it?

IP: Yes, music and sounds are very important. Each film is a different story depending on where the funds are. I don't have one regular composer. I was lucky to work at the National Film Board of Canada with Norman Roger on Sexy Laundry, in Berlin with Max Knoth on Esterhazy and from Bologna with Andrea Martignoni on the films Evening and 98kg.

LTM: Some elements act as deus ex machina that change the situation, as the wind in the “everyday life trilogy” of Sniadanie (Breakfast, 2006), Popoludnie (Afternoon, 2012), and Abend (Evening, 2016). What do they represent to you?

IP: The themes of my films are relationship problems, misunderstanding, loneliness, alienation. Often a coincidence or an external force, like the wind, helps to overcome the problem. But also a form of plasticine, which goes beyond the limits of logic, can do it. Thanks to its specificity, plasticine exaggerates and distorts reality, at the same time seducing us with its smoothness and illusion. It's good to be surprised.

LTM: In which ways does your creative work relate to you?

IP: I am constantly open to new challenges. Choosing books for adaptation is about discovering new emotions, clever stories, good dialogues, and interesting endings. Also, very important to me is the theater, maybe because the table which I work on is for me a theatrical stage. Actors are puppets made of plasticine. It's up to me how they come alive. I love the theatre, especially the Theatre of the Absurd, and I want to take the audience on a journey through a surreal world.

LTM: Last autumn the younger generation of animation students in Lodz took artistic action in support of the Polish women’s resistance movement. How do you relate to that and to similar calls?

IP: The students are wonderful, and they made films so quickly I learned afterwards. It's good that young people want to be active and brave. They're great. Such actions are very important. They show that animation has an impact on our lives. It can change something. These films have made a noise. That's the point.

LTM: Where are you going from here on?

IP: I'm currently preparing a second adaptation of Roland Topor's book Joko. It's a very powerful, brutal, clever story with black humour. The new project is a grotesque study of human slavery and dehumanization. Very strong. The plasticine technique fits perfectly into the world of macabre. The great conventionality of this technique cannot only realistically exaggerate the complexity of the protagonist's character, but also successfully show the surreal situation with its vulgarity. You can't get bored working with a text by Topor. I hope I surprise you. In two years, we will have the premiere! You are welcome!

Framestore Sets Sail on ‘1899’ with New Virtual Production Tools
Animated Characters: The Art of Babbitt – Part 1
Bruce Smith and Ralph Farquhar Talk ‘The Proud Family: Louder and Prouder’ Season 2
VFX is the ‘Thing’ for Tom Turnbull on Tim Burton’s ‘Wednesday’
We Need to Chat
Choc Chip Animation Riffs on Pop Culture in ‘The Art of Murder’
F is for Flake: The (Not So) Great Animation Robbery?
Re-VIEW: ‘Avatar: The Way of Water’ – A Miraculous Vision
END_OF_DOCUMENT_TOKEN_TO_BE_REPLACED