Written and executive produced by Charles’ son Craig and grandson Bryan, Apple TV+ and Wildbrain’s new animated special harkens back to the original ‘Peanuts’ comic strips that prompted conversations by adults inspired by the actions of kids. 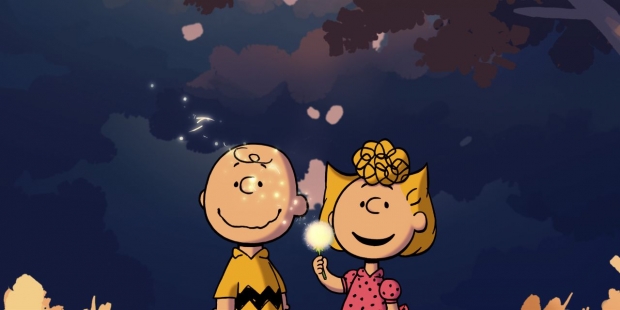 Since 1965, with the release of the first Peanuts television special A Charlie Brown Christmas, iconic characters from Charles M. Schulz’s famous comic strip have not only brought celebration to the homes of millions of families each holiday season but have also served as important conduits for mature conversation.

Whether learning about the true meaning of Christmas, first loves during Valentine’s Day, or discussing politics, Thanksgiving history, or the importance of Arbor Day, Peanuts was there to help. Now, in celebration of Earth Day, Charlie Brown, Sally, Linus, and the gang are back in It’s the Small Things, Charlie Brown, premiering today, April 15, on Apple TV+.

“These characters go beyond being your average cartoon character,” says the special’s director, Raymond S. Persi. “They are full, rounded humans. And, because of that, I think people can see themselves in each character. So, when we put them into a special like this, people don't feel like they're just being preached to with a message, you're being told a story through these characters, where they're discovering things that you can discover as well.”

“Each of the characters represents a piece of my dad, in all honesty,” adds Craig Schulz, Charles M. Schulz’s son, who wrote - along with Cornelius Uliano - and executive produced the latest special with his own son, Bryan Schulz. “But each of the characters has their own flaws. I think, as we all look at ourselves, we do have our flaws. Even someone as secure as Linus has that blanket he drags around. So, the characters in the comic strip are a lot like a keyboard on a piano. There are 88 keys there and they all play a different tone. That's the fun of working with Peanuts characters. You have this wide variety of kids and they're just fun to work with.” Produced by Peanuts and WildBrain, It’s the Small Things, Charlie Brown follows Sally’s bond with a special little flower on the baseball field that may spell disaster for the big game. For Charlie Brown and the team, it’s just the inspiration they need to make a positive impact on their environment. In addition to Craig and his son, the special is also executive produced by Cornelius Uliano, Paige Braddock, Josh Scherba, Stephanie Betts, Amir Nasrabadi and Anne Loi.

The special is the second in the set of stand-alone Snoopy Presents specials. The first, For Auld Lang Syne, premiered December 10, 2021, on Apple TV+. Nominated for Best Animated Special Production at the 49th Annie Awards, the show was the first new Peanuts TV special to air in a decade. Craig notes he wanted to create something that prompted a conversation for adults, as well as inspired young kids, harkening back to the mission of the comic strips his father originally created for adults.

“What’s interesting about this special is it’s really a reflection of our society,” he says. “When you watch this special, Charlie Brown represents the average person, and the ball field is a metaphor for the planet. Charlie Brown is so obsessed with winning this ballgame, he doesn't see that the ballfield is going downhill. And then there’s Sally, this small, innocent child coming out and seeing this dandelion, that she thinks is a beautiful flower, and all she can do is protect it. Sally represents the new generation.”

Craig continues, “There are so many young children doing so many creative things to enhance the planet, enhance the neighborhood, and enhance relationships. So, this special is giving a voice to children. And we hope, by seeing this special, children can realize that one child, one small voice, can do a lot. I think it's also a wake-up call for the adults when they realize, ‘I am Charlie Brown. I look at my neighborhood going downhill, and I don't do anything.’” The idea for It’s the Small Things, Charlie Brown came when Craig, who produced 2015’s The Peanuts Movie and, more recently, The Snoopy Show, had an even bigger idea - to create a new series of TV specials that would pay homage to his father’s work, the original holiday TV specials many know and love, and initiate a conversation between parents and their kids as they watch the specials together.

“Based on the success of The Snoopy Show, we wanted to do something that paralleled the comic strip,” Craig explains. “The comic strip appealed to people on multiple levels. Number one, it appealed to children, because of the visuals and the storylines. But more so the comic strip was written for adults, and my dad would always attest that it was an adult comic strip. So, with that in mind, I got together with my son and decided, beyond The Snoopy Show, which is great, we needed to create something that would appeal to adults and that would lead to an adult and child sitting down, watching a show, and having a conversation afterward about the content of that show.”

Craig and Bryan conducted a writer's conference, where roughly 10 writers came together to pitch ideas and see what stuck. One writer, Josh Salesman, came up with the idea of a lonely dandelion on a baseball mound. From there, the team expanded that premise into It’s the Small Things, Charlie Brown. Then, they called Persi, a former director on The Simpsons who also worked on Disney feature films such as Wreck-It Ralph and Frozen.

“I think WildBrain was looking for creative people that had some feature experience,” says Persi. “They reached out to me about two years ago so that we could incorporate the feature storytelling techniques into a special like this. These characters have a lot of depth. For me, revisiting this over the past couple of years, I’m realizing and remembering just how much depth they have.”

He adds, “Yes, it's an Earth Day special. But, at the same time, it's pointing out that even if you feel you're the smallest person in the world, you can make a big difference simply by caring. And if you care passionately about this thing, that will inspire others, and then that passion grows.” While the new Peanuts TV specials are filled with classic nostalgia - still featuring dial phones and mimicking, to the best of their ability, Charles Schulz’s line work - the team also wanted to bring Charlie Brown and his friends to life in a fresh way with new animation techniques.

“We had worked on The Peanuts Movie, which is a full-on CGI special, and then, if you flashback to the 70s with Bill Melendez’s style, it’s basically still-frame animation,” Craig shares. “We wanted something in between. We wanted a unique look. And that's when we came to Raymond and Clay Kaytis.”

Persi and creative consultant Kaytis came up with a clever way to manipulate lighting effects and create what Craig calls, “the faux-CGI look.”

“I think it’s absolutely beautiful,” he says. “And the animators have done a wonderful job of reproducing the character line art my dad had created. We couldn't be happier with the look. And everyone that’s seen it so far has just been blown away by it.”

Persi adds, “This animation is rig-based Harmony. It allowed us to get as close to the look of the strip as ever. We were able to pick an area that we thought felt like this golden era for ‘Peanuts,’ maybe late 60s to mid-70s, and obsessively look at things like Linus’ hair’ and make sure the lines were consistent to where they would be in the strip. It felt as though this was a comic strip come to life more than we had a chance to see before. That, combined with the work of our production designer, Pascale Campion, who designed the environments for the characters and how they would look and feel in this world, I think it helped make the look of this special really stand out.” While his goal, first and foremost, is to honor the legacy of his father’s work, Craig says that, in addition to updating the animation, he hopes to go deeper with societal issue topics brought up in these animations and, also, get to know these lovable characters at a deeper level.

“We've come up with these ideas for specials that really delve into deeper societal issues that really weren't touched upon in the previous specials,” he says. “And we also look to really dig into the characters individually in a more in-depth way than it was ever done in the past. And I think you'll see that as the specials unveil.”

But even as they venture into unexplored territory, Craig and Persi are also passionate about maintaining the “safe space” originally created in Peanuts to bring up otherwise hot-button topics in very non-threatening ways.

“The one comment that we always get from parents is that they know it's a safe zone to go to,” Craig says about his father’s comics and TV specials. “With so much animation today, parents turn on the TV set and they're shocked by it and have to take their kids out of the room, or turn it off, or find something else. You never find that in the ‘Peanuts’ universe. Parents love it and embrace it and share it with their children.”

“We wanted to create the specials that people remember so that, even though it's something new, when they go into it, they feel comfortable and they feel this sense of coming home,” Persi adds. “And then wow them with the way we've been able to elevate the storytelling and the visuals.” And, when it comes to parent approval, Craig is no exception, sharing the “Peanuts” legacy with his own son whom he hopes will continue to nurture and grow. “My personal journey has always been to continue my dad’s legacy and as best I can, and uphold what he did for those 50 years, and my son carries on that tradition,” he concludes. “With these specials, we're true to the work of my father. And that was our main goal. We hope people continue to watch the specials as more of them roll out. We've had a great team behind all these, so we're extremely excited to hear the feedback.”

Taking an Old-School VFX Approach in ‘All Quiet on the Western Front’
‘Natural Habitat Shorts’: Like ‘Ranger Rick,’ But for Adults
Framestore Sets Sail on ‘1899’ with New Virtual Production Tools
Animated Characters: The Art of Babbitt – Part 1
Bruce Smith and Ralph Farquhar Talk ‘The Proud Family: Louder and Prouder’ Season 2
VFX is the ‘Thing’ for Tom Turnbull on Tim Burton’s ‘Wednesday’
We Need to Chat
F is for Flake: The (Not So) Great Animation Robbery?
END_OF_DOCUMENT_TOKEN_TO_BE_REPLACED