An Interview with Priit Pärn

The pre-eminent Estonian animator, artist, teacher, and author discusses his sophisticated, often ambiguous, but always meticulous films, recently honored with a retrospective and exhibition at the Bergamo Film Meeting in Italy. 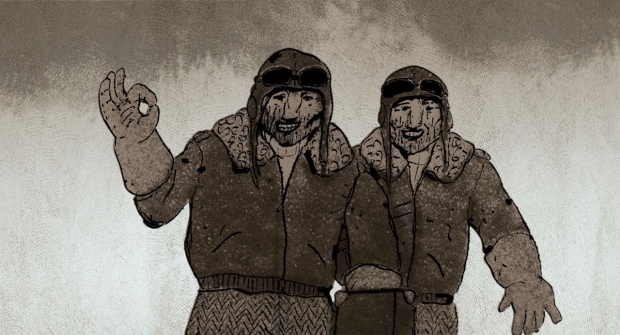 As a main representative of the new wave in Estonian animation and prominent world author, animation veteran Priit Pärn started out first as a biologist. The two souls, scientific and artistic, cohabit in the original synthesis we can find in sophisticated and surrealistic films such as the award-winning 1895 (1995) or Karl and Marilyn (2003). Rational constructions constantly permeated by doubt, ambiguity and illogical solutions, his films are extremely stimulating, destabilizing, enchanting, paradoxical yet meticulous.

His drawings are clean and linear, though bizarre, as in Life Wthout Gabriella Ferri (2008) and Pilots on the Way Home (2014). Recently honored at the Bergamo Film Meeting (Italy) with a retrospective of 19 works and the exhibit Between Enigma and Magic, Pärn can boast a considerable experience and filmography attested by a number of grand prix wins at prestigious festivals, including Animafest (Zagreb), Krok (Ukraine), Anima (Brussels), Haff (Utrecht), and Oiaf (Ottawa).

Lawrence Thomas Martinelli: How do you develop your storylines?

Priit Pärn: The answer would probably be too long. I have taught my tricks and techniques to my students, it takes 1, 2, 3 or more semesters. Some students have even learned something.

LTM: How do you work on the soundtrack?

PP: Working with a composer and a sound designer is different. For example, composer Olav Ehala, with whom I have been working for over 25 years, already knew from the very beginning of production what kind of film I would make. The soundtrack comes in when the film is basically ready, only the sound is missing. What does a director need to know? He doesn't have to know exactly what music there will be - otherwise he would be a composer - but he needs to know why he needs that music.  In the case of sound design, he must be able to say what is not good for the film, and he must be able to give the direction in which the sound designer must move. In any case, making the soundtrack is the most exciting time for me in the entire film production process. LTM: Some situations seem inspired by the Theatre of the Absurd. Any relations?

PP: I have thought a lot about Absurd as an Art category, and in the end I am not very sure that what I am doing is absurd at all. There is a lot of talk about the absurd, but what is the absurd? Verbal and non-verbal arts, Breton, Dali, Ionesco and Magritte are put together. But achieving absurdity in different art forms requires a very different approach. When the poet writes, "An imaginary cat flew hopelessly over asthmatic houses," a surreal poem is ready. Animating the same thing will result in a cartoon. And if something is far from surreal, it's a cartoon.

Then the fact is that surrealism and humor are not exactly best friends. Where there is surrealism, there is no humor. And vice versa. I have realized that in stop-motion it is much easier to achieve a surreal feeling than in a cartoon. If a used toothbrush, with all the traces of use, lives its second life in the film, then it can give a surreal feeling. The same thing in the drawing may not do it. Of course, it should be noted here how it is drawn. We are again talking about cartoon.

So I've read screenplays for the absurd theater, but I don't think I've got any direct influences from it. Indirect ones – yes.

LTM: Is there an existentialistic take in your films or are you simply playing with surrealism and paradox?

PP: If we start talking about existentialism, one could easily get the impression that I have a philosophical platform or the need to convey some messages. Definitely not! Am I just playing? Simple games are football and golf. But whether my games are simple or complex, it is up to the experts to decide. I'm a filmmaker.

LTM: Many of your works have no dialogue. Do you consider speech useless or is it to favor international appreciation?

PP: Some stories are too complicated to do without words. Or they would be too long. Saying "Grandpa is dead" takes 3-5 seconds, and the silent scene of the same kind takes much longer.

Part of it is that I am a representative of a language spoken by just over 1 million people, and we all know that translation will be lost. At the same time, the fact that animated films of major languages ​​can be watched (listened to) with the eyes closed without losing the plot, is true. LTM: Would you say your particular style and free storytelling has a turning point related with the USSR’s crisis in 1991?

PP: There was no crisis in the USSR in 1991, the USSR collapsed that year. This decay did not affect my storytelling, but rather my style and free storytelling affected the decay of the USSR.

LTM: How has animation changed in Estonia since you started in 1994 with EestiJoonisfilm Studio?

PP: I started animating in the studio Tallinnfilm in 1976. When the Soviet Union collapsed, the studio EestiJoonisfilm became the legal successor of Tallinnfilm's Drawing Animation studio. At the moment, I have been a director of animated films for 45 years, 10 of them during the Soviet era and the rest in free Estonia. Animation has changed in every way, technologically and in essence. Estonian animation is Estonian animation, but also a part of world animation. I can talk about the changes in both, but this is not even a lecture, but a series of lectures. I'm not going to deal with it here.

LTM: And how has Estonian society changed?

PP: We are part of a democratic Europe, with everything that goes with it. Good and bad.

LTM: You have lived and worked in Estonia both before as part of the USSR and after as an independent country. What changes and what constant characteristics have there been in your works?

PP: During the USSR, restrictions were political, now the limiting factor is money. PP: In Estonia, the money for making films comes mainly from the state budget, so the situation in Estonia has been quite good. But there must be someone or something between those who need money and someone who distributes that money wisely. There is a possibility that this part of the system could be a problem.

The situation in the modern world of animation is quite interesting. Thanks to technological progress, animation, which used to be a fairly elitist art form, has become available to a wide range of people. This brings a real flood of film into the world of short animation films. The films are easy to make and it is easy and cheap to take them to festivals. If one festival gets thousands of films, how can you choose them? Short film festivals are likely to face major changes.

LTM: How does your dry surrealism relate to reality in more recent times?

PP: Humor and wit are the salt and pepper of life. Political correctness has done a great deal to make the world humor-free. You could even say that humor is humor-free.

LTM: Since I Feel a Lifelong Bullet in the Back of My Head (2007) Olga Marchenko has been co-directing. Has this affected the way your films are made and how?

PP: Since 2006, I have made 2 films with Olga Marchenko. In 2008 she transformed into Olga Pärn, but we continued to work together. All the films I made before Olga were completely different from each other, and the same goes for the films made in collaboration with Olga. So it is very difficult to say whether the difference between two consecutive films is due to our cooperation or, for example, to climate change. But we both like cooperation, otherwise we wouldn't do it for 16 years.