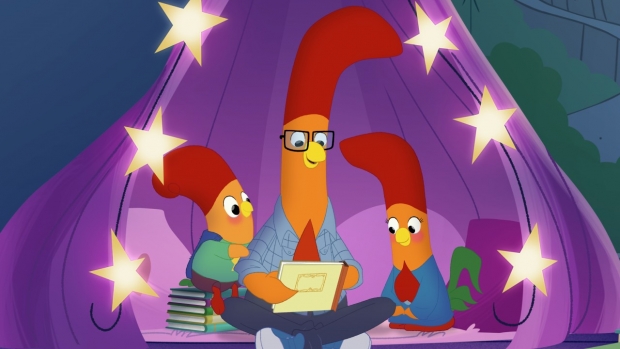 In 2011, three years after famous children’s book author David Ezra Stein published his Caldecott Honor-awarded book [the first of three] about a “Little Red Chicken” improvising on her papa’s bedtime stories, Loris Kramer Lunsford picked up a copy of “Interrupting Chicken” and, as she says, “fell in love” with the idea of adapting it into a series.

“I sat on it for a while, trying to figure out the best way to approach it,” says Lunsford, known for executive producing the 2020 children’s television series StarBeam. “I loved the book’s quirky way of approaching storytelling and making it your own and, in 2017, I shared it with Ron Holsey, who I had worked with in the past, and said, ‘What do you think?’ And he loved it, too. In April of 2018, we pitched it to Apple.”

After almost 10 years dreaming about this day, Lunsford is ecstatic to introduce kids to Piper, a young chicken who has a habit of interrupting story time; every time Piper hears a story, she can’t help but jump in, ask questions, and let her imagination run wild. The 2D animated preschool series, created in partnership with Mercury Filmworks, premieres globally today, November 18 on Apple TV+.

The series stars the voice talents of three-time Emmy Award winner Sterling K. Brown (This Is Us) as Papa; Juliet Donenfeld (Pete the Cat) as Piper; Sarah Elizabeth Thompson as CJ; Maximus Riegel (Klaus) as Benjamin; Luke Lowe (Big City Greens) as Duckston; and Jakari Fraser (Spidey and his Amazing Friends) as Theodore.

“While our series is very much about creative writing, and Piper is a creative writer, the books themselves are just about storytelling and being able to make your own story,” says Lunsford, who executive produces the series alongside Stein, Sesame Street’s Clint Eland, and Hilda’s Chantal Ling.  “And I love being able to change these classic stories and then add in some of our own.” Interrupting Chicken’s TV adaptation features a mix of classic fairy tales - from “Goldilocks and the Three Bears” to “Little Red Riding Hood” - along with famous mythology like “Hercules,” as well as completely original stories from Lunsford, Holsey, and the team. Dr. Lucy Calkins, Founding Director of the Teachers College Reading and Writing Project and the Richard Robinson Professor of Children’s Literature at Teachers College, Columbia University, serves as reading and writing expert on the series through the Apple TV+ changemaker initiative.

“There’s one episode where Piper’s mail lady tells her a story about The Pony Express, a real former mail delivery service in the Western United States,” shares Lunsford. “We also have a 70s disco flashback episode, too," Holsey adds.

As the lovable and unbridled Piper takes every story time opportunity to jump in with her own rendition of tales both known and unknown, Lunsford and Holsey hope that the show introduces children to the joy of creative writing and encourages them to let their imaginations run wild.

“Fifth grade is when I started honing my skills to become a creative writer, and it was my fifth-grade teacher who really inspired me,” remembers Holsey, now known for his own creative writing work on shows like Curious George and Helpsters. “The thought of doing a show that inspires and empowers kids to be able to do creative writing and play with ideas, literary devices, and creative writing concepts was really appealing to me. For a lot of kids, it doesn't occur to them that they could be a writer or that, when they watch something on TV, they could be the ones creating it.” “’The Phantom Tollbooth’ was one of my favorite books, so I thought, ‘Maybe we could do a ‘Phantom Tollbooth’-esque thing for a new generation and for a slightly younger audience and get them thinking about writing earlier?’” he adds.

Inspired by the 1961 novel by Norton Juster, “The Phantom Tollbooth,” about a boy who suddenly finds himself launched into a fantasy world of adventure, Holsey says one of the main goals of Interrupting Chicken - outside of entertaining children with fun stories and engaging characters - was to introduce them to stories that subtly promote certain literary devices.

“For example, we wanted to do one about inferences in stories,” explains Holsey. “So, we're like, ‘Oh, ‘Goldilocks,’ of course.’ The bears come home, and somebody's been sleeping in their bed, eating their porridge. They're making inferences about who's been there. ‘The Boy Who Cried Wolf’ is about character motivation and trying to figure out why he's crying wolf and why the wolf is taking the sheep.”

He continues, “A lot of it was finding literary or creative writing concepts and then seeing what kinds of stories might pair with them well. And then going from there to figuring out ways to make them fresh and interesting.”

Fresh, interesting, and, kid-friendly, were all factors that had to be considered, not only when choosing stories to include in the series, but also in deciding how to change them when, as it turns out, so many are not age appropriate.

“I remember the first time I sat down with all these classic fairy tales and realized how many are inappropriate for children,” shares Holsey. “I mean, people are being eaten, murdered, kidnapped, and I'm like, ‘How are we going to do this?’ The brilliant thing is that, since Piper’s rewriting them, we could tell them in our own way. We softened the ‘Goldilocks and the Three Bears’ story, we softened the ‘Three Billy Goats Gruff,’ where the troll is not actually trying to eat them, we softened the ‘Three Little Pigs’ and the ‘Big Bad Wolf.’” But on top of adapting these well-known fairytales, one of the bigger production challenges for the team was having to drastically build out a whole chicken universe that was previously only inhabited by Piper and her Papa in the books.

“The first book is only two real-world characters; the father and the daughter, Papa and the little red chicken,” says Holsey. “We really had to build out the world with Piper’s neighbors, friends, grandparents, teacher, and her mom. But there are a few things that are the same as the book, like the elephant of surprise character, who is in the second book and appears as a recurring character only in the story world of the series.”

Lunsford adds, “We included David Ezra Stein, and we kept him in the loop the entire time. We never wanted to go so far with it that we would alienate him or his fans.”

Then there was the small matter of turning Stein’s fluffy, almost Rococo surrealist illustrations into crisp, bright, 2D cartoons.

“The one direction we took right from the beginning was that Piper had to be recognizable as the ‘little red chicken’ character from the book,” notes Lunsford. “The books are so fantastic and, visually, they were amazing. So, even though it was going to be different, it had to look like she jumped off the pages.”

Holsey adds, “The other thing about the show is that we have two spaces that exist: our ‘real world’ where animals talk and there are no humans, and our ‘fantasy world’ that we call ‘story world,’ where humans exist. We wanted to differentiate those, so when Piper jumps into a story, we have a different visual language, and the effects are flatter. I know that Mercury had started out thinking about those Golden Gooks and Mary Blair’s style of flat illustrations for our story world. But, of course, we have this character who goes between both. So there has to be some connection, so she doesn't look out of place in the story world.” Lunsford and Holsey say it was an interesting balance to come up with and they are certain that they “didn't make life on Mercury very easy, but they stepped up and they did an amazing job.”

It’s been a long journey, especially for Lunsford, waiting for this reimagining of Interupting Chicken to come to fruition, but the day has arrived, and the team hopes their retelling of Piper’s retellings proves to be a fun, funny and fruitful tool that kids can take with them well into their adulthoods and prove that storytelling outside the lines should be celebrated and encouraged.

“I’m just so happy kids are finally going to get to see this,” says Lunsford. “We’ve put a lot of work into it - from when I first found the book, to when Ron and I developed this pitch together, to when we sold it, to now - and it’s been very fulfilling. It's actually been one of the most fun projects that I've ever worked on.”

And, for Holsey, who says he would have loved to have a show like this as a kid that could teach him about creative writing and encourage that dream, it would be “the best possible scenario” to be able to just show kids how fun writing can be. “I'm just excited to see the audience's reaction,” says Holsey. “I'm very happy with what we're able to do with the fact that we're doing 2D animation for this age group. The learning objective of the show is creative writing, and that you can be silly and have fun. I love that we have a lot of gags, and some squash-and-splat humor, which you don't see a lot of in CG shows. It allows us to be more playful with the comedy and do some classic animation stuff that you're not seeing a lot of these days. I think, for that reason, it’s been really freeing.”

In addition to the series launch, Apple TV+ will debut its complementary Interrupting Chicken holiday special, A Chicken Carol, globally on Friday, December 2 as part of the platform's robust lineup of festive family fare.  In the show, when Ebenezer Wolf decides to cancel the holidays, Piper teams up with the Three Little Pigs and some ghostly friends to change his mind.