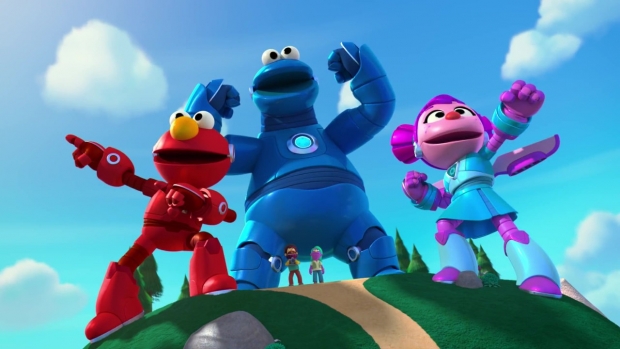 With over 4,500 episodes and 52 seasons, not to mention 205 Emmy Awards and 11 Grammy Awards, it’s no surprise that by Sesame Street’s 50th anniversary in 2019, 190 million children had viewed over 160 versions of Sesame Street in 70 languages.

One of those children was Frank Falcone, now president and creative director of Paw Patrol and Big Blue’s Guru Studio, who partnered with Sesame Workshop to produce the 3D animated preschool series, Sesame Street Mecha Builders, premiering today, May 9 on Cartoon Network’s Cartoonito as well as tomorrow, May 10 on HBO Max.

“I was raised in an Italian-speaking household and learned English by watching Sesame Street at home,” says Falcone. “Before I even got to kindergarten, I was learning my English on this show back in the early 70s. So, these characters are as old as me, almost, and I have a real passion for them. When we were approached by Sesame Workshop to interpret their characters as mecha robots and take responsibility for keeping their integrity, I took that very seriously.”

Sesame Street Mecha Builders reimagines iconic Sesame Street characters Elmo, Cookie Monster, and fairy Abby Cadabby as mecha robot superheroes-in-training who use their STEM (Science, Technology, Engineering and Mathematics) superpowers to solve wacky larger-than-life problems. The show’s first season consists of 26 episodes, each 22 minutes long and split into two 11-minute stories. The episodes tackle a wide range of STEM-related concepts, such as properties of matter and light, simple machines like pulleys and levers, mapping, and even how to stop an asteroid hurtling toward Earth with a giant, squishy pie. Elmo, Cookie, and Abby transform into small, or large, mecha robots to solve whatever problem they’re facing, but not without trial and error.

“They're superheroes-in-training, so they make mistakes,” says Olexa Hewryk, vice president and head of animation for Sesame Workshop and an executive producer and showrunner for Mecha Builders. “That's a key aspect of the show. And it is all about trying until you get it right. That's why we have this chant in every episode; ’Plan it. Test it. Solve it.’”

He continues, “There are moments on the show where the Mecha Builders have attempted and tried a couple of different solutions, and they don't work. And it's the fact that they don't give up, that they are learning and, in the end, are able to succeed, that’s very relatable for kids and shows the importance of perseverance.”

While the original idea to take the puppeteered world of Sesame Street and transform it into a CG-tastic series came from a Halloween costume at one of Sesame Workshop’s holiday parties, the team had already been workshopping ideas for how to “push the characters in new dynamic directions.” Mecha robots seemed the perfect way to give Sesame Street characters new life, as well as extend the characters’ relationships with viewers who might be outgrowing hand-puppet shows.

“For us, the biggest reward is knowing we’re giving kids who might be growing out of Sesame Street the chance to continue to grow and learn from and enjoy these characters that they love, in a new way, but that feels seamless to them,” says Hewryk.

Falcone adds, “A fuzzy, soft Muppet has a certain connection to a child, and it has its own value. But it also has limitations. When kids get a little bit older, they feel like puppets are for babies. Now we have robot versions of these characters. They’re shiny, they’re superpowered, it’s like an automobile. I like to call our studio the ‘Michael Bay’ of preschool. We like to bring high energy and excitement to the screen. And that was our mandate, without losing what you love about the puppet soul inside that robot.” But translating live-action puppeteering to a CG series is easier said than done. Though the Guru team had plenty of material to work with for reference, they also had the daunting task of sorting through decades of Sesame Street seasons, where puppets, voice actors, and styles changed as the years went by.

“There are five decades worth of content, so we had to look through it all and decide what the highlights were,” explains Falcone. “We looked at the elements of those characters that stayed consistent since the 70s, and what changed about them that we also love now.”

One perk was that Falcone and his team only had to focus on three out of Sesame Street’s dozens of other characters. While some Sesame Street characters - such as Elmo’s puppy Tango and the Martian Yip Yips - make special appearances, the focus of the series is on Elmo, Cookie, and Abby, who each have very distinct personality traits that Hewryk, Falcone, and the rest of Mecha Builders’ production ream drew from for the shiny new CG character designs.

“Abby flies, so Mecha Abby got jet wings,” explains Hewryk. “As for Cookie Monster, he still has some of the same challenges -- the self-control with the cookies and his impulsive nature. So, in those moments where he thinks he can solve a problem, even if it turns out he can’t, he immediately grows big. With Elmo, he’s always been the curious one, so he's got this arm of tools. His tricycle is also such a big piece of him on Sesame Street, so we gave him yellow wheels to roll around on.” And even mecha Cookie Monster, with all his technological advances, still has his signature googley eyes.

“We had to figure out the actual algorithm that makes his eyes wobble in the right way so we can hand animate that,” notes Falcone. “But he also has to be able to look directly with his super-vision, and we needed to get the transition right from wobbly, goofy eyes when he does silly things to intent and focused when he’s trying to solve a problem. And that's something that the puppets don't have the ability to do.”

The robotic mouth movements were also a challenge.

“When you have a robot, you don't expect the mouth to really bend at all,” says Falcone. “And a puppeteer has the ability to bend it and do some kind of mouth shapes. But we wanted to bring some of that thinking to the characters without it becoming weird because, if it gets too liquidy, it doesn't speak to the integrity of the material. The amount of mouth bending had to be just minimal enough to get the emotions across and not look weird.”

Hewryk adds, “We checked in at every stage, asking ourselves, ‘Does watching these characters fill us and our audience with that same level of joy as we got watching the original characters on Sesame Street?’ We were always circling back to our original characters and had extensive discussions about how these characters would move in CG so that they would feel consistent with the puppets. Things like leading with the head, which is not traditional in animation but very much what the puppeteers do.” On top of the mouth and eye movements, the team had to get down the actual walks of these mecha characters -- the one movement type they didn’t have any visual reference for.

“Most puppets are like us in our zoom calls, we don’t know what exists below our mid-section,” says Falcone. “Puppets tend to move their arms in an arch to imply a walk. And that’s all the information we have. At one point we said, ‘Imagine a puppeteer was sitting in a robot, controlling its every move. What would that look like?’ We still wanted these characters to be silly. We didn't want these robots to be too human or too agile. They have to be goofy and fun, or it’s not truly Sesame Street.”

Mecha Builders also features what Falcone calls “AMs” or the “Any Muppets” that exist in this universe with mecha Elmo, Cookie, and Abby, all who need to look like everyday puppets that have come straight from Sesame Street. No robotics, no superpowers, just regular, brightly colored, fabric texturized citizens. Overall, Falcone says working on the show amounted to “huge amounts of pressure.” “I felt the weight of the world,” he says. “But I really truly believe in my heart that those characters on screen, even in a new shape and a new form, are just as lovable as the puppets we all grew up with.”

According to Hewryk and everyone at Sesame Workshop, Falcone and his team at Guru more than met expectations.

“This show has allowed for growth for these characters and for us to be able to more deeply explore them, which I think is a fun opportunity,” he shares. “And I think it's a testament to our work and Guru’s work for drilling down on all that; how the mouths were rigged on the characters and how they would move. Guru’s been a wonderful partner and it's been a real pleasure to work with them and their fantastic, talented artists and directors.” For Falcone, the experience, while fraught with pressure, has given him the chance to give back to the franchise that had such an impact on his childhood and help expand that experience for those not ready to let go of their Sesame Street friends.

“Bringing these characters into the future, so that kids don’t feel like they’re dated or that they’re only ‘mom’s and dad’s’ characters, it's a hard thing to do,” he says. “We’re appealing to a third generation of Sesame Street viewers with these characters that have been icons of youth for decades. And I believe they should continue to be those icons. It’s fantastic to see characters that have lived this long getting to continue into the 2020s. I hope the show is a huge hit for everyone.”