I Have A Question Theodore Ushev

Theodore Ushev finally gets around to answering some life brightening questions. 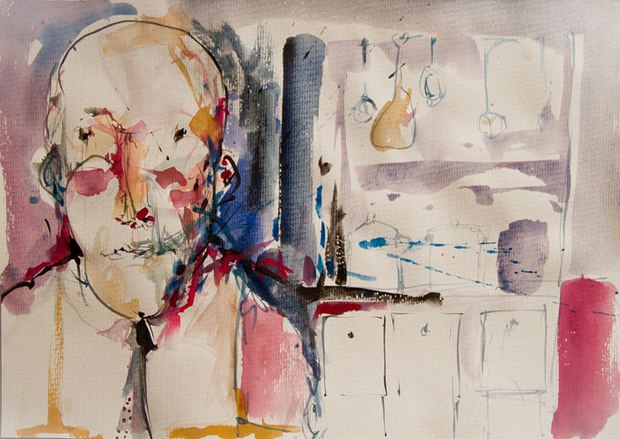 Theodore ‘Teddy' Ushev is a Newfoundland spawned chef, dancer, singer, actor, choreographer and television presenter. He is widely regarded as one of the most influential dancers in the history of animated musicals.

Ushev agreed to meet me in my grandmother’s backyard in Cumberland, Ontario where had wagon races and pushed each other down the snowy driveway on wooden toboggans. It was August. 1971. Hotter than usual.

I get the greatest pleasure from First kiss, first snowflakes, first drawing for a film, first bite of dinner, first gout du vin, first warm shine of sun in spring.

The name of my autobiography would be Absalom, Absalom or Elegy. My most beloved possession is A plastic toy dinosaur. My daughter Alex gave it to me before a trip. It was her favorite toy. Later i accidentally read in her diary book - "My father and dinosaurs disappeared in the same day". Actually, this is just another borrowed story from G. Gospodinov book, The Physics of Sorrow". In my case, it was only a fossilized scorpion. Scorpions are still present on the earth, some of them even get elected President.

A (non-family member) person I have high respect for is.... Today, I cannot think for anyone else than Anthony Bourdain. Apparently, I don't have respect for living people. I only have respect for angels, but recently I didn't have the chance to bump into one. I only find some feathers on the streets, which gives me hope they exist.

The song that makes me tingle is “Girlfriend in a Coma”, The Smiths

The funniest thing that happened to me is that I became a film director! Still makes me laugh. My mother laughs at me too.