I Have a Question Ru Kuwahata and Max Porter 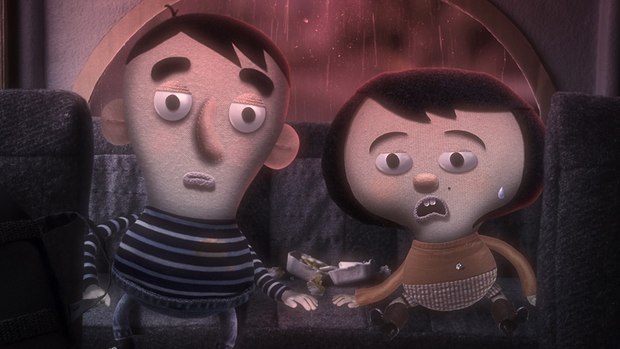 'Something Left, Something Taken' by Max Porter and Ru Kuwahata

Since 2008, Max & Ru have been working together as “Tiny Inventions”. They have directed and produced TV commercials, music videos, PSAs and independent films.

Their 4th short film, Negative Space is nominated in the Animated Short Film category at the 2018 Academy Awards (aka Oscars)

After much debate and occasional fisticuffs over packing, drivers and temporal time loops between our various court appointed lawyers, Max and Ru agreed to meet me in a field of red carpets somewhere near the Canadian/U.S. border. The year was not this one. The weather was mild. The day was, like today, Friday. R: Getting my blood pressure taken at doctors’ offices or pharmacies.

I love the squeeze.

M: The first cup of coffee in the morning.

The name of my autobiography would be….

M: The Overthinker (as evidenced by how many times I rewrote this response)

My most beloved possession is….

R: A hand winding watch necklace given by my grandma. Possesses class & (sort of) keeps time.

M: A silkscreen print by Nina Frenkel titled “Shall We Dance.” It’s the first thing I see when I wake up and it gives me perspective and courage for the day.

R: I’ve been watching the Winter Olympics and there’s so much respect for these athletes. The way they maintain mental control, perform under pressure and the consistent effort they put in to their sport. As a filmmaker, we never have this one, real-time performance that defines our career. What we do seem so easy after watching these competitions.

M: The specific person changes year-to-year, but it’s always one of my students. That generation makes me feel good about the future.

M: These days, any track by Run The Jewels will get my blood flowing. It's the best thing to listen to while washing dishes.

R: Somebody who continued to make.

M: Someone who paid attention.

R: Living with Max is filled with funny moments. Other episodes can be found here.

M: In a recent video interview, I said "It's God's fart..." instead of "God's fault..." As soon as the words came out of my mouth, I saw all of the people in the room choke back laughter. (Listen to the clip on loop in the player below.)

Framestore Sets Sail on ‘1899’ with New Virtual Production Tools
Animated Characters: The Art of Babbitt – Part 1
Bruce Smith and Ralph Farquhar Talk ‘The Proud Family: Louder and Prouder’ Season 2
VFX is the ‘Thing’ for Tom Turnbull on Tim Burton’s ‘Wednesday’
We Need to Chat
Choc Chip Animation Riffs on Pop Culture in ‘The Art of Murder’
F is for Flake: The (Not So) Great Animation Robbery?
Re-VIEW: ‘Avatar: The Way of Water’ – A Miraculous Vision
END_OF_DOCUMENT_TOKEN_TO_BE_REPLACED