I Have a Question Paul Driessen

In which Chris Robinson asks animators profound and inane questions that have little to do with animation. Today's guest is the legendary animator, Paul Driessen. 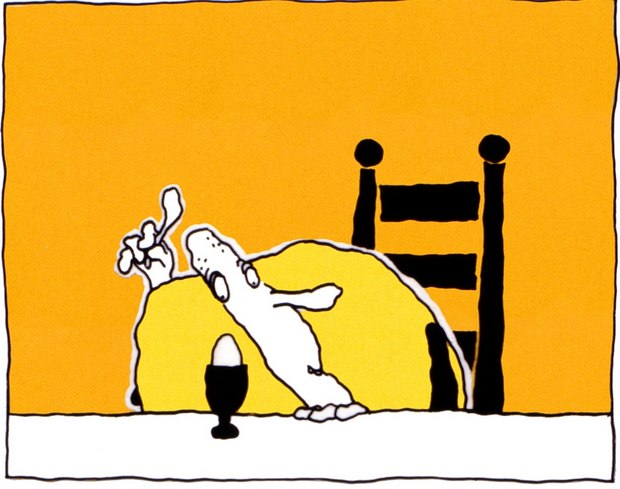 'The Killing of an Egg' by Paul Driessen

Paul Driessen is a noted director, animator, writer and teacher. His films (including 3 Misses, Elbowing, The Writer, The End of the World in Four Seasons) have won more awards than yours.

He unreluctantly agreed to meet me at the Sérignan nudist beach in the South of France on a humid December afternoon in 1940. It was a Thursday. Like no other.

Driving in a sports car through Paris with the warm wind in my hair.

I don’t have a sports car and not much hair left but Paris is not too far from where I live.

More realistically, I realize that I get much pleasure from looking forward to my next day. I have always plans, go swim, write, animate, continue my book…

I have a hard time recognizing faces (there is a name for this deficiency). Very embarrassing when visiting festivals and meeting people I had spent time with before but I have no idea who they are.

I recently read and loved Freedom by Jonathan Franzen and A Little Life by Hanya Yanagihara.  The latter has very profound human insight. However, the flashbacks in both books to the past of their protagonists are so similar that I started mixing them up.

Two graphic cartoony novels I love are Pinocchio by Winschluss and the very charming Le Grand Méchant Renard by Benjamin Renner (of which Annecy showed the delightful pre-premiere of the animated feature version this year).

An old favourite is a Dutch book, Lieve Jongens by Gerard Reve. Unfortunately, its beautiful use of my obscure language can only be appreciated by Dutch and Flemish readers.

Maybe George Dunning, the director of the Yellow Submarine, who gave me a chance to work with him, but mainly because he never let go of his high standards, kept the film’s graphic quality, despite all the obstacles, and there were many (read the book: Inside the Yellow Submarine).

The old Duke Ellington classic “Mood Indigo” / The Beatle’s “Strawberry Fields” (there is a reference in its tuning, I find) / George Brassens’ “La Prière”. They all bringing back nostalgic memories.

The band The Real Tuesday Weld does a nice rendering of Lady Gaga’s “Poker Face”, with lovely old cartoon images on its video clip.

Last summer I rode back on my bike from swimming in the river not far from where I live and the small rocky path winding upward was a little too steep for me.

At a certain point I came to an almost full stop, I lost my balance and fell down head first into the 2 meter ditch beside the road, full of brambles.

Unfortunately, I had a very heavy packsack on my back with swimming gear, books, a parasol, a folding chair, which pulled me down while on top of me was my heavy old bike. And I lost my glasses.

The brambles broke my fall somewhat (I had no helmet) but also enclosed me completely with their thorns (I had a flimsy T-shirt on); I couldn’t move.

There was not a soul in sight and I had no cel phone (but then again I couldn’t move my arms anyway).

A typical “Now what?” situation.

And then there was the day that I drove down the German autobahn with Marv Newland and the back wheels of an old truck in front of us slowly started to come off. All the BMW’s and Mercedes’s beside and behind us held back while the spectacle unfolded in front of us of two rusty old wheels on their own, bouncing along the highway.

Tags
Interview
Humour
Paul Driessen
National Film Board of Canada
Dutch animation
More From ANIMATIONWorld:
Next Post
Keep it in Motion - Classic Animation Revisited: 'Overtime'Previous Post
A Labor of Love: Disney Artists Work After Hours to Create ‘Weeds’ Short
Related Content
I Have a Question John Canemaker
I Have A Question Joanna Quinn
I Have a Question Michael Dudok de wit

Taking an Old-School VFX Approach in ‘All Quiet on the Western Front’
‘Natural Habitat Shorts’: Like ‘Ranger Rick,’ But for Adults
Framestore Sets Sail on ‘1899’ with New Virtual Production Tools
Animated Characters: The Art of Babbitt – Part 1
Bruce Smith and Ralph Farquhar Talk ‘The Proud Family: Louder and Prouder’ Season 2
VFX is the ‘Thing’ for Tom Turnbull on Tim Burton’s ‘Wednesday’
We Need to Chat
F is for Flake: The (Not So) Great Animation Robbery?
END_OF_DOCUMENT_TOKEN_TO_BE_REPLACED