I Have a Question Patrick McHale

In which Chris Robinson asks animation professionals profoundly inane questions about the inner workings of their existence. Today's guest is 'Over the Garden Wall' creator, Patrick McHale. 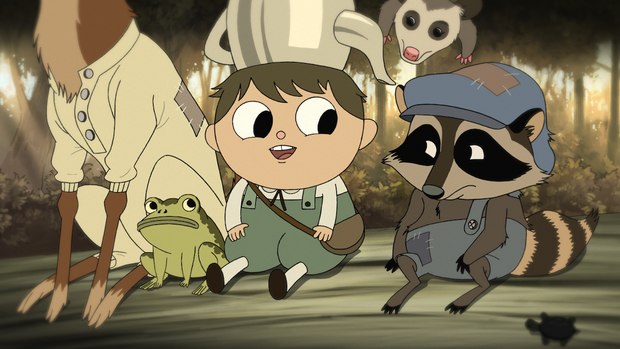 'Over the Garden Wall' by Patrick McHale

Mr. Patrick (call me Pat) McHale an American writer, storyboard artist, animator, songwriter and independent filmmaker. Outside of his work as a writer and creative director for the acclaimed animated series, Adventure Time, McHale is best known for his short film Tome of the Unknown (2011) which later inspired his outstanding Emmy-Award winning mini-series, Over the Garden Wall.

He agreed to meet me in the early 1930s at Henry Lee’s fatal flower garden not far from where that great ship went down, you know the one near where the wagoner’s lad’s body was found out back the butcher boy’s shop.  He wore old shoes and leggings. I brought Acadian One Step moonshine. After six swigs apiece, we spoke by the light of the silvery moon.

I think the trait I like least about myself is not being able to express myself clearly, both in everyday life and in my art/writing/work. I have certain things that I want to express, but I always struggle to find the right words, the right lines, the right colors, etc.  It feels like I'm equipped with the wrong set of tools; trying to build an aircraft carrier with a box of crayons.

That perfect book no one's been able to write yet. I'd say I try to have high respect for everybody, as best as I'm able to. We're all in it together; you, me, the other people, the birds, the animals, the plants, the fungus, fire, water, empty space, so on and so forth. We're all part of the same big chemical reaction, and it all deserves an equal amount of respect, I'd say.

“Be My Boy” by the Paris Sisters

Only really serious stuff happens to me. Taxes and car insurance and love and regret. Funny stuff is only on TV.

Tags
Interview
Humour
Over the Garden Wall
Patrick McHale
Cartoon Network
American animation
More From ANIMATIONWorld:
Next Post
Unpacking ‘Negative Space’ with Max Porter and Ru KuwahataPrevious Post
Keep it in Motion - Classic Animation Revisited: 'Love and Vehicles'
Related Content
Pictures from the Brainbox: A Weekly Dose of Indie Animation - 'Over the Garden Wall'
I Have a Question Tom Warburton
I Have a Question Amanda Forbis & Wendy Tilby