I Have a Question Patrick Doyon 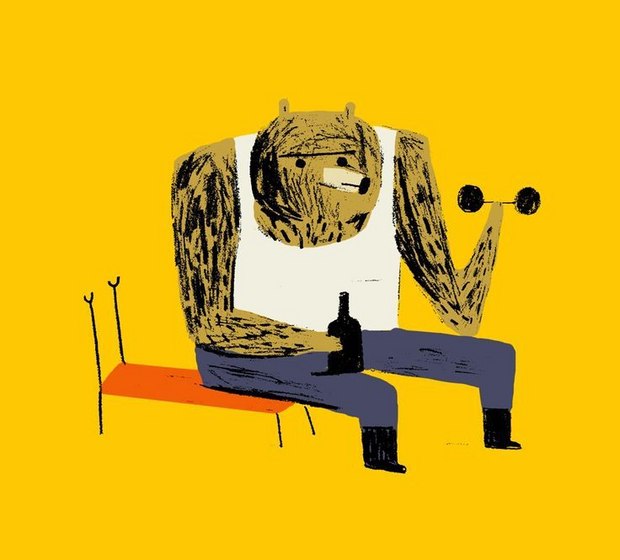 Bear with Beer by Patrick Doyon

Patrick Doyon is an Academy Award nominated director based in Montreal, Canada. His first professional film Sunday (2011), produced by National Film Board of Canada, was nominated for an Oscar for best animated short in 2012. In 2015, he received the prestigious Governor General Literary Award for his first children’s book The Sandwich Thief (published by Chronicle Books). In Spring 2017, Patrick presented his first video installation titled GRRR (Georges Rémi, Relu & Remixé) at the gallery La Bande Vidéo in Quebec City.

Patrick agreed to meet me at Parc Lafontaine during a frosty January afternoon. We drank beers, chased squirrels, and made snow angels with our pee. It was, of course, a Sunday.

I get the greatest pleasure from.... sun, horizon, water (salty or not), big waves. Not many people around me.

The name of my autobiography would be…. "Probably Just Beginner's Luck"

My most beloved possession is…. SNES Chrono Trigger, complete in box. My former university teacher, Jean-Philippe Fauteux. He has been teaching for over 30 years, is not jaded and continues to renew himself and his methods. I meet him sporadically and his opinion counts a lot for me. He is the main reason why I love animated shorts.

"In The Garage" by Weezer

At the end of a boozy evening, to say to a girl the Jean Gabin's famous sentence: "You have beautiful eyes you know".

Instead of answering "Kiss Me" as Michèle Morgan in the movie Le Quai des Brumes, she simply said I was stupid and she turned around.

We are together now for more than 15 years.

The winner of the 1st official Baby-Foot tournament in my secondary school.

Taking an Old-School VFX Approach in ‘All Quiet on the Western Front’
‘Natural Habitat Shorts’: Like ‘Ranger Rick,’ But for Adults
Framestore Sets Sail on ‘1899’ with New Virtual Production Tools
Animated Characters: The Art of Babbitt – Part 1
Bruce Smith and Ralph Farquhar Talk ‘The Proud Family: Louder and Prouder’ Season 2
VFX is the ‘Thing’ for Tom Turnbull on Tim Burton’s ‘Wednesday’
We Need to Chat
F is for Flake: The (Not So) Great Animation Robbery?
END_OF_DOCUMENT_TOKEN_TO_BE_REPLACED