I Have a Question Marta Pajek

In which Chris Robinson asks animators profound and inane questions that have little to do with animation. Today's guest is Polish animator, Marta Pajek (Impossible Figures and Other Stories II). 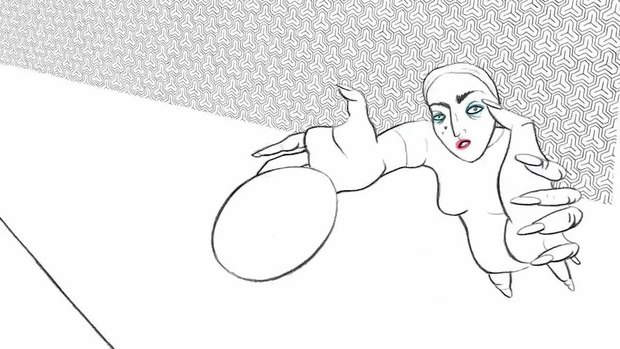 'Impossible Figures and Other Stories II' by Marta Pajek

Marta Pajek is a Polish animator best known for her fantastic short, Impossible Figures and other Stories II, which won awards all over the place in 2016 and 2017. Pajek graduated from the Graphic Design Studio at the Kraków Academy of Fine Arts in 2005, studying under Jerzy Kucia. She also studied in Finland under the Estonian filmmaker Priit Pärn. Pajek's cinema style is shaped by an interest in the arts, graphic design and also theatre, psychology, spirituality and human experiences.

Marta agreed to meet with me at an egg factory warehouse party near Hamburg on a frigid December evening with Jarvis Cocker in attendance.

I get the greatest pleasure from sleeping. Despite an occasional nightmare, I often have very enjoyable and vivid dreams, which provide me with both amusement and inspiration. I consider dreams a very powerful tool. Like art they can - if not 'explain' - the world, then at least make it more familiar.

The trait I like least about myself is losing my sense of humour, which happens once in a while. I hate it when I get too serious.

The book I value above all others is... I don't value any book above all others and I think it would be limiting, even alarming if I did. But I do value those books, which stood the test of time for me. I love Roald Dahl, especially Matilda. It's still an engaging, hilarious and beautifully told story after so many years from when I read it as a child. I also have a deep sentiment for Brothers Lionheart. I still remember how powerful it was when I read it almost 30 years ago and I respect Astrid Lindgren for touching such deep and difficult subjects. A (non-family member) person I have high respect for is choreographer Ohad Naharin.  I admire him for the daring and consequence in finding his own language of movement and artistic expression.  And for taking it beyond the stage and sharing with non-dancers.

At the moment it's a song, which will hopefully appear in my next film – Impossible Figures and other stories III. It still makes me tingle after a year of listening to it, analyzing and breaking it down to smallest elements and rhythms.  I don't want to give it away yet, though.

The funniest thing that happened to me…. The funny thing is that I remember several hilarious situations, which happened recently, where I was laughing hysterically, but I cannot remember what it was about. It must have been a MacGuffin.