I Have a Question Luc Chamberland

In which Chris Robinson asks animators profound and inane questions that have little to do with animation. Today's guest is Seth's Dominion director, Luc Chamberland 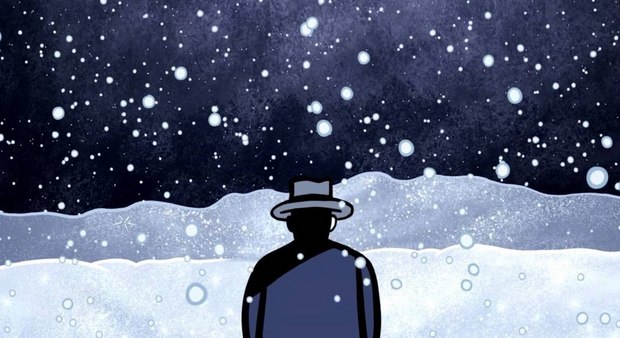 Luc Chamberland is a Montreal-based animator and director. After graduating from Concordia University, Luc embarked on a nomadic career that eventually landed him in London, where he created animation for several feature films, including Steven Spielberg’s We’re Back! A Dinosaur’s Story. He was also director of animation on the Dreamworks feature Joseph: King of Dreams. More recently, Luck directed and animated the NFB feature animation/documentary, Seth’s Dominion. Luc kindly agreed to meet with me in a barbershop in Guelph, Ontario at 2:15pm on a hotter than not July afternoon.

I get the greatest pleasure from.... living an intense moment, being in the moment and at the same time being right next to it. It’s like a double awareness; you look and appreciate the beauty of something and simultaneously you are sitting right in the middle of it all, your senses are in full poetic mode. This apply to anything: walking, reading, biking, drinking tea, writing, looking, seeing a film on a giant screen, talking, laughing, achieving an impossible film, swimming.

The trait I like least about myself is my obsession of wanting to do fantastic films experiences for others to enjoy, repeatable little time capsules that peoples could look at them again and again … it just get me in trouble, the kind of trouble I love.

The book I value above all others is … that is like the film that I value above all others, there are too many films that I value to choose only one thousand , so books and I will put ‘’ bande dessinées ‘’ ( comics ) in that category are too many , my house crumbles under the weight of all my books so to name a few that I actually read more than twice : ‘Man’s Search for meaning ’ by Victor Frankl; ‘A Confederacy of Dunces by  John Kennedy Toole;  Letters To A Young Poet ‘by Rainer Maria Rilke; Spirou: ‘La Mauvaise Tete’’André Franquin;  Lord of A Visible World - letters compilation of H.P. Lovecraft;  Jungle Book by Harvey Krutzman; Don Quixote’ by Cervantes; Bobo:  La prison dorée  ( the golden prison) by Paul Deliege;  Jacques The Fatalist by’ Denis Diderot; It’s a Good Life If You Don’t Weaken by Seth,  1984 by George Orwell .

A (non-family member) person I have high respect for is.... there are SO MANY people that I have high respect for in the artistic field, and in the environment movement, I have to say that I am lucky enough to work with and befriend many of them. So in the many that I never meet I will go for Eddie Izzard. He is an amazing talent of multi-language stand up, acting, and very clever sharp mind. He is at the same time extremely kind and demanding of peoples …   I truly basically envy his powerful mind.

The song that makes me tingle is....  Film music give me incredible ‘’tingles ‘’ especially from Bernard Hermann, Ennio Morricone , Lalo Schifrin, and John Barry. It is usually music that tries to take over the film … there a lovely silly song of David Bowie ‘’ Kooks ‘’ dedicated to his son I believe, that simply goes on about kooky parents who promise to misbehave with him. I can easily play it again and again and again and …..

‘’One of the’’ the funniest things that happened to me…. During an incredible funny screening of the best shorts of Tex Avery – this was in Paris – I was laughing so much I was losing my breath, crying from too much laughter, than about 3/4 into the screening in a nearly silent moment between one short to the other, this French gentlemen stood up, pointed at me and said loudly enough so the whole cinema could hear it: ‘Can you please stop laughing ,we can’t hear the film because of you.’ That statement was so absurd to me that I immediately burst out laughing… and then whole cinema laughed with me and that gentlemen frustrated and confused by the whole cinema laughing exited suddenly, which made us all laugh even more.