I Have a Question Leah Shore

In which Chris Robinson asks animators profound and inane questions that have little to do with animation. Today's guest is American animator/cookie maker, Leah Shore. 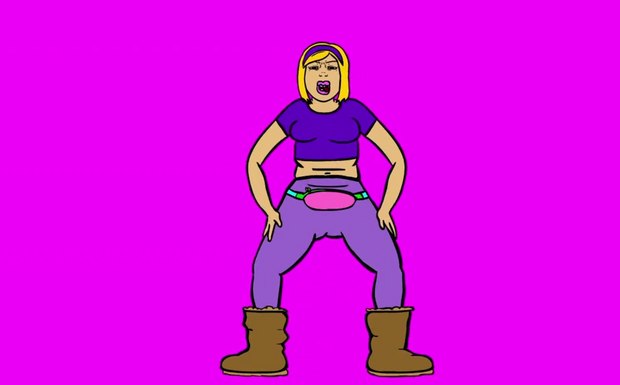 Leah Shore is a Brooklyn, NY based artist, animator, and film director best known for her short films: Meatwaffle,  Old Man, and I Love You So Much. While on the lamb for discounting squirrels at a Long island foot market, Shore agreed to meet me for waffles and chicken on the Seaway International Bridge on a gloomy October in the Spring of 1864.

This depends on so many different factors. If I am writing dirty things or things that I am not taking too serious: Anita Harton. Obviously. Tee hee.

If I am being professional? F. Shore or something with my last name for Shore.

Soccer. I love soccer though admittedly I do not play it anymore. I used to compete. I also Love to swim and run IRL.

THIS IS REALLY HARD TO DECIDE:

Anything by Patti Smith …ANYTHING.

Unsure, a lot of funny things have happened to me, but once when I was 12 I was forced to go to a camp where all we did was go to amusement parks on the East Coast the entire summer. SOUNDS FUN RIGHT (no. no it was not)?! At one park in Virginia I went on my first upside down roller-coaster called The Volcano. It shot us up through a volcano that spewed a ring of fire and then did corkscrews until the end. While the corkscrews were going on I was screaming and being shaken around like a sack of beans so much that my retainer at the time flew out of my mouth thanks to physics and fell into that same Volcano. I couldn't even do anything because I was being tussled around and locked in a early 00’s roller-coaster seat! I was devastated, ran to the closest telephone booth (I was not allowed to have a cellular at the time) and called my mom hysterically crying telling her about my retainer loss. My mom was laughing so hard that she forgave me. It gets better, right after that phone call a bird pooped on my arm and at first I naïvely thought someone dropped yogurt because I am adorable guys, but someone pointed out it was in fact bird poop. I was teased about the poop for the rest of the summer. The end. Go listen to Jobriath.

Tags
Interview
Satire
Humour
Leah Shore
American indie
More From ANIMATIONWorld:
Next Post
Keep it in Motion - Classic Animation Revisited: 'Bingo'Previous Post
Pictures from the Brainbox: A Weekly Dose of Independent Animation - 'Bird Shit'
Related Content
I Have A Question Fran Krause
I Have a Question Priit Tender
I Have a Question Steven Subotnick

For ‘Loki’ VFX, Time is On Method Studios’ Side
Nailing the Unique, Stylized Animation of ‘What If…?’
Virtually Sensational: Previewing SCAD AnimationFest 2021
‘Star Wars: Visions’ Takes Japanese Culture and Anime to a Faraway Galaxy
‘Chicago Party Aunt’: Turning Life’s Sh*t into Mike’s Hard Lemonade
Talking Real-Time Animation with DNEG, BRON, and Chromosphere
France’s TeamTO Gets By with a Little Help from Their Friends
Another Chance at Unplanned Parenthood in ‘Teenage Euthanasia’
END_OF_DOCUMENT_TOKEN_TO_BE_REPLACED