I Have a Question John Dilworth

In which Chris Robinson asks animators profound and inane questions that have little to do with animation. Today's guest is US animator and funny guy, John Dilworth (Courage the Cowardly Dog) 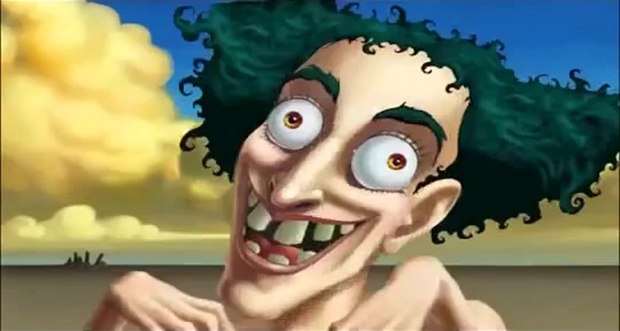 John Dilworth is an animator, director and actor. He is best known as the producer, director, writer, and creator of the animated television series Courage the Cowardly Dog. His other acclaimed short films include Dirty Birdy and Life in Transition. He agreed to meet with me inside a taciturn cave with strict instructions to communicate only via subtle head movements and rabbit signs on a Saturday in October around 1907.

I get the greatest pleasure from… laughter. Especially from love.

The book I value above all others is… Impossible to claim only one… Cicero’s letter to his son, De Officiis.

A (non-family member) person I have high respect for is.... Nedd Willard. High levels of compassion and tolerance.

The song that makes me tingle is…. ‘La Charreada’ sung by Sandra Glez.

A laughing trauma during the vocal recording of the aliens from Bunny Bashing. William Hohauser and I could not breathe, tears obscured our vision, spleen spasms. Today, if we recall that glorious two-day binge we suffer the same.

Tags
Interview
Humour
John Dilworth
Courage the Cowardly Dog
US Animation
indie animation
More From ANIMATIONWorld:
Next Post
Keep it in Motion - Classic Animation Revisited: 'Hilary'Previous Post
Pictures from the Brainbox: A Weekly Dose of Indie Animation - 'Milk Milk Lemonade'
Related Content
I Have A Question Chris Landreth
I Have a Question Georges Schwizgebel
I Have A Question Koji Yamamura

How ‘Luck’ Applies a ‘Less is More’ Approach to Comedy
Z is for Zagreb: The Animafest Zagreb Exhbition 1972-2022
Dude! - ‘Rise of the Teenage Mutant Ninja Turtles: The Movie’ Arrives
‘Super Giant Robot Brothers’: A Milestone in Virtual Animation Production
‘Luck’ Aims to Bring Hope to Kids In and Out of Foster Care
Pre, Tech, and Post: The Many ‘Vizings’ of ‘Chip ‘n Dale: Rescue Rangers’
Hammering Out the VFX in ‘Thor: Love and Thunder’
END_OF_DOCUMENT_TOKEN_TO_BE_REPLACED