I Have a Question Janet Perlman

In which Chris Robinson asks animators profound and inane questions that have little to do with animation. This week's guest is the many award earning animator, children's book writer/illustrator and lobster fearing lover of pugs, Janet Perlman 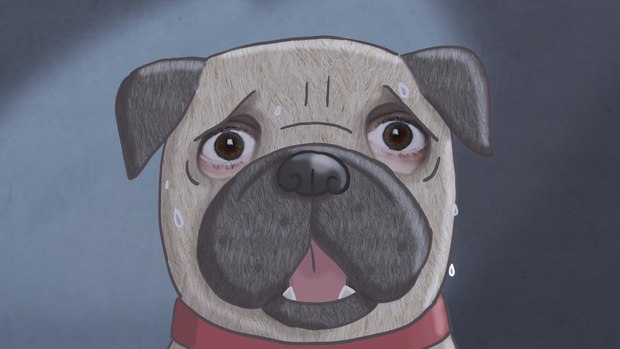 After a stellar career on the Oshawa Broadway scene, a tooth injury forced Janet Perlman to trade the bright lights for the moody tones of her acclaimed puginese and poodle paintings. The reclusive Perlman agreed to meet me outside a Montreal clown factory at 7:36pm during a peaceful June snow storm.

Drawing animation. I really do. But there is also dance. I’ve pranced around in a vaguely acceptable fashion all my life. Mostly contemporary Jazz, with some African and Brazilian. The goal is not performance, though I did tap dance once at the Ottawa Animation Festival picnic. Dancing for me induces a state of amnesia where I completely forget life’s worries and clutter. It is also very energizing, and is a way to appreciate and study motion. There is a lot of overlap between dance and animation.

Scrabble. Throwing those big words up on the board, diverting your opponent from the triple word square, covering your bases, keeping your options open, racking up those points, the dramatic game changers … Ok I’m not big on sports. I do like skating, but my new motto is “No more falling!”

A person (not being a family member) I idolize is....

Mostly non-fiction, such as books on sociology, science, and some biographies of comedians.

I can’t give you just one song. I like many different kinds of music. For me, the beat and the melody come first. I never listen to lyrics. If they have no lyrics are they still considered songs? Here are some genres and examples that make me tingle.

Electronic Swing, such as “Booty Swing” by Parov Stellar

Two songs that make me tingle-roar with laughter:

Most of my work involves humour, and a lot of my inspiration comes from everyday life. I was once ironing a rayon shirt, when suddenly I realized that the iron setting was on cotton! Ha ha! Call in the dry cleaners!

Ok that didn’t really happen to me, it happened to my aunt.