I Have a Question Hisko Hulsing

In which Chris Robinson asks animators profound and inane questions that have little to do with animation. Today's guest is Hisko Hulsing (Cobain: Montage of Heck, Junkyard) 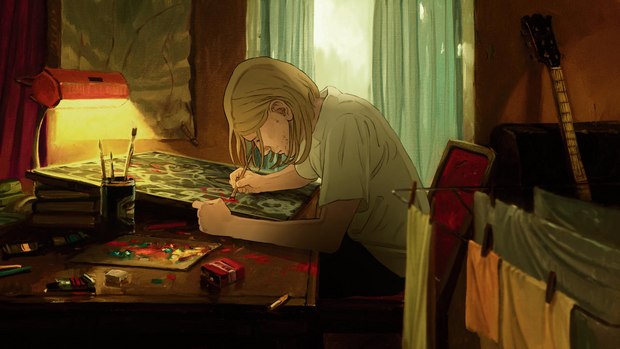 Hisko Hulsing is a Dutch director, animator, composer, painter and storyboard artist. His animated films include Seventeen and the award-winning and widely acclaimed, Junkyard. More recently, he animated many sequences for the the documentary, Cobain: Montage of Heck. Hisko agreed to meet with me and a half bottle of Crown Royal Northern Harvest rye on April 5th at 7:27am in a vacant parking lot outside of Cinemec Utrecht.

I get the greatest pleasure from a million different things. That´s how it works. Every pleasure eventually turns into boredom if you enjoy it long enough and then the art is to find another pleasure as soon as possible.  Not that my life is a succession of pleasures. There´s quite a bit of torture in my life and in my profession, but that helps me to enjoy the pleasures even more!

The trait I like least about myself is that despite my intention to be as honest as possible, I will not share the truth about the darkest depths of my soul with the readers of Animation World Network.

The book I value above all others is a book that I read once, I forgot the title.

I stopped reading novels 10 years ago. Now I mostly read non-fiction books about history and science because they help me to understand the world a little better.

It´s unfortunate that I forget 90% of all that I read, otherwise I would be really smart by now.

I also like to read biographies of artists that I admire. The best book I read in years was a biography about Dmitri Shostakovich by Krzystof Meyer, about his music, but also about living in fear under Stalin´s terror.

Other excellent books that I recently read were Sapiens by Yuval Harari, about the history of humankind and Black Mass by Timothy Snyder about the Holocaust, a book that gave me  new insights and finally made me understand the Holocaust a bit better.

I have to admit that I didn´t finish Black Earth yet, because it is so incredible dark and depressing and I often like to spend my evenings enjoying happier pleasures.

A (non-family member) person I have high respect for is Frank Zappa who died 24 years ago. I discovered his music and persona at an age that I still idolized people, so he stuck with me in my brain.

But what I learned from him is to try out many things in my art. Zappa would seldom repeat the same trick, he was constantly reinventing himself and trying out new things. That definitely inspired me to do whatever I want to do, even if people tell me in advance that I can´t do it.

The song that makes me tingle is again, there are thousands of songs that make me tingle.
I listen to music about 10 hours a day, that´s 3.650 hours a year, so repeating one song would probably make my brain explode.

My taste in music is very broad, so there´s no way to pin me down on one particular song or genre. Dont you even try it, Chris!

Check out my Spotify profile and discover what I listen to.  It´s no secret at all!

I´m still waiting for it. There´s lots of funny things happening to me every day, none of them really sticks out. But recently I can´t escape the thought that life itself is one big joke. …
I imagine the gods are having real mean fun up there in the clouds, laughing hysterically about all our stupidity here on earth.