I Have A Question Fran Krause

In which Chris Robinson asks animators profound and inane questions that have little to do with animation. This week's guest is animation renaissance man, Fran Krause 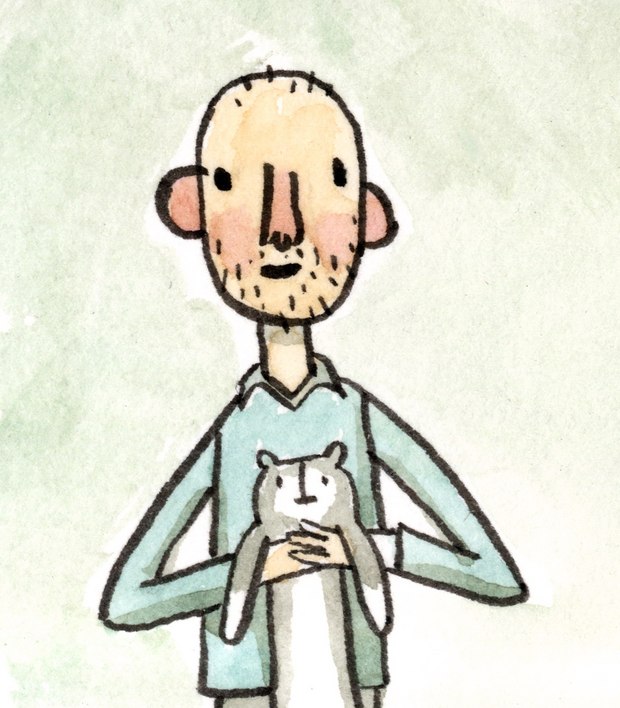 Fran Krause, renaissance man and twin, has made indie films (Mr. Smile), TV pilots (Utica Cartoon) worked on an assortment of shows (Superjail, Over the Garden Wall) and authored a well-selling comic strip book (Deep Dark Fears). As if that’s not enough, he also teaches animation at CalArts! He’s also one of the nicest people you’ll ever meet. What a show-off.  The esteemed Mr. Krause graciously agreed to sit down with me during a 5am bobsled run on Matterhorn mountain to answer some excellent queries about his being .

There's a lot of good stuff out there – I like having breakfast. Maybe it's breakfast? I like seeing a student understand something that's been elusive. I like feeling useful. But this is the last day of the semester and I'm exhausted. I would like to sleep until 9 am tomorrow and then have a slow breakfast. Pancakes, eggs, sausage. A bit of everything. I also like talking with family and friends about things that are important to us, but right now, I think breakfast would be top notch.

I don't really get sports, and I have the same reaction to sports enthusiasm as I do to religious evangelism. I don't understand it, I make jokes, and I try to get away. I do like most food that's available at sports stadiums, so there's some conflict there, I suppose. I really like biking and long-distance running, though. They're both meditative – I can tune out all the computers and think for a few hours. I also really like fixing bikes, so that's another plus. I shy away from sports where losing is a possibility. If I go for a two-hour run, and I only make it one hour, I still have a one-hour run, and that's not too bad. If I only played baseball for four innings, people would probably be annoyed.

Huh. That's a tough one. I'll come back to it. Okay, I'm back. I answered some other questions first. I think this one's tough because I don't really idolize anyone I don't know. I mean, there's a lot of really amazing artists out there, but it's hard to idolize someone for their art. I think the Mountain Goats are a great band (is it singular when it's a one-man band?) and John Darnielle is a fantastic writer, but a lot of good stuff comes from people who live lives that I wouldn't want to experience. I usually idolize people who seem to live their lives in a good way. Like I see them handle difficult things and think, “Damn, that's really quick and perceptive thinking.” I don't know if I'd idolize their art or skill, but I think I'd rather have someone's peace than their skill.

This one's easier. I've been listening to “Modern Love” by Bowie a lot lately. I'm in the car about an hour and a half each day to get up to CalArts, and I'm usually pretty tired, so this one's a really good one to shout along with. Also, it has a quality as if Bowie's smiling while he's singing it. It has a lot of joy. I think the same quality is in “Queen Bitch” too. I was listening to Bowie stuff for a few weeks after he died, and it hasn't really faded. With him and Lemmy and Prince going about at the same time, I figured I should probably see Willie Nelson – how the heck did he outlive all those young kids? Jo and I saw him this summer. He puts on a good, messy show.

I need some direction on this one. It's the last one I'm answering because every time I think of something it seems like a small thing. Or an old college story that involves a lot of shortsighted planning and coincidence. Or an embarrassing story from high school. So I'm thinking of a lot of small stories but nothing big.

One time my brother Will and I were driving cross country and we left our only credit card (Will's) at the top of Mississippi during a rainstorm. And we didn't realize it until we got to the bottom of Mississippi. So we drove across the state three times that day. It was funny in retrospect.