I Have a Question Elliot Cowan

In which Chris Robinson asks animators profound and inane questions that have little to do with animation. Today's guest is animator and teacher, Elliot Cowan. 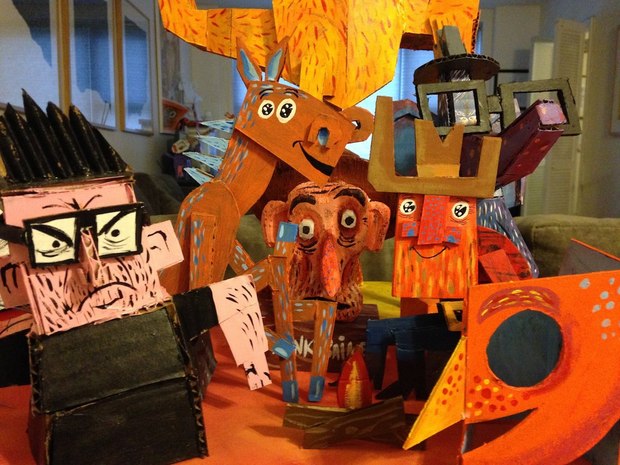 Elliot Cowan surrounded by his friends.

Originally from Australia, Elliot Cowan is a U.S. based animator (The Stressful Adventures of Boxhead and Roundhead), sculptor, painter, and teacher. Cowan agreed to meet me on an Amtrack train to Philadelphia on the condition that we down a mickey of Bulleit, shave our heads and make a single reference to Paul Kelly, which I have just done.

I get the greatest pleasure from....
Being by myself.

The trait I like least about myself is…
You know when you’ve done something appalling and the thought pops into your head and you want to curl up and die? I have a lot of those kind of memories and it’s hard to not think about them sometimes.

The book I value above all others is…
I don’t have the chance to read much but when I do I find myself rereading all of Bill Bryson’s books. I don’t know if “value” is the right word but I like them a lot. I guess I value them. He’s a smart guy and very funny.

A (non-family member) person I have high respect for is…
Eleanor Roosevelt. I’ve been listening to this Presidential podcast and just finished the FDR episode which details Eleanor more than Franklin Delano.
She was an amazing women. Go listen to it or try the Wikipedia.

“Call Me Home” by The Cat Empire.
I like a horned section.

The funniest thing that happened to me….
Nothing I type seems very funny when I read it back to myself.
Once I fell down some stairs and landed back on my feet. That might have been funny if anyone had seen it but I was alone at the time.
I don’t know if it would be the funniest thing, though.
I’m reading this now and it doesn’t seem especially funny.

Tags
Interview
Humour
animators
Elliot Cowan
Australian animation
More From ANIMATIONWorld:
Next Post
‘Negative Space’ Explores the Lasting Bond Between a Father and SonPrevious Post
Pictures from the Brainbox: A Weekly Dose of Indie Animation - 'Hipopotamy'
Related Content
I Have A Question Regina Pessoa
I Have A Question Joanna Quinn
I Have a Question Konstantin Bronzit

Taking an Old-School VFX Approach in ‘All Quiet on the Western Front’
‘Natural Habitat Shorts’: Like ‘Ranger Rick,’ But for Adults
Framestore Sets Sail on ‘1899’ with New Virtual Production Tools
Animated Characters: The Art of Babbitt – Part 1
Bruce Smith and Ralph Farquhar Talk ‘The Proud Family: Louder and Prouder’ Season 2
VFX is the ‘Thing’ for Tom Turnbull on Tim Burton’s ‘Wednesday’
We Need to Chat
F is for Flake: The (Not So) Great Animation Robbery?
END_OF_DOCUMENT_TOKEN_TO_BE_REPLACED