I Have a Question Chintis Lundgren

In which Chris Robinson asks animators profound and inane questions that have little to do with animation. Today's guest is Estonian animator, Chintis Lundgren (Manivald, Life with Herman R. Rott). 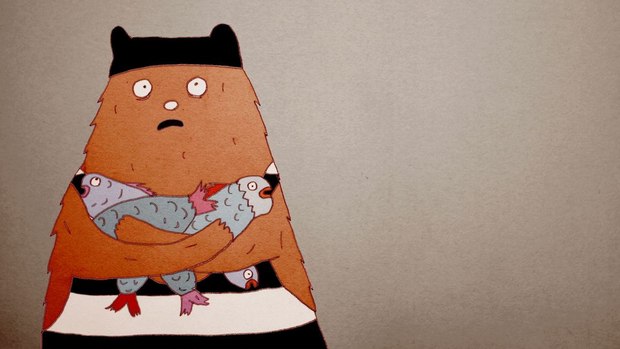 Chintis Lundgren is an Estonian-born animator currently living in Croatia. Lundgren taught herself animation and quickly gained attention in the animation world for her quirky music videos, PSAs and short films featuring a light, absurdist tone along with distinct anthropomorphic characters.  Her films (including About the Hard Life of the Barn Swallow, the music video, I Love your Face, and the award-winning Life with Herman H. Rott, and her latest work, Manivald) have screened at numerous international animation festival.  Chintis (if that is her real name) agreed to meet me unaccompanied near a squirrel sanctuary on a sunny Sunday March afternoon in Utrecht

Your assumption is wrong.

Confusing people. I practice this regularly and judging by the lack of understanding I think I’m doing well.

Priit Tender. Because he’s so funny. Or because of birds.

“What do I Get” by Buzzcocks. Because I believe in fair treatment.

When I was in art school (the one where we had to crawl around naked, while wrapped in plastic), there was one really cool looking tall blond girl that I kept seeing around town. She seemed so amazing somehow and I never dared to talk to her. Once when I was very very drunk I met her in a bar and we spent a long time talking about stuff. She was clearly flirting with me, which I didn’t mind at all. Later that evening we went to a park and I peed behind a bush. She peed behind a tree. It seemed odd that she can pee standing up. Also she had very wide shoulders and a nice small butt. Her name was Donna and she was a carpenter. We agreed to go bicycling the next day. In a forest. But the next day I woke up sober and realized I’m not really a lesbian and that I like penises too much. I called her and said that I’m not coming. And that I’ll call her. I never called her.

About five years later I was standing in a long queue in a boring shop and I noticed on the cover of a magazine a photo of a badly shaved man wearing a lot of make-up. Underneath it was written: Donna, the man who likes to dress as a woman. Inside was an interview with her and her girlfriend. That moment I felt really sorry for never calling her. Because a woman with a penis was exactly what I needed back then.

I guess it’s not really a very funny story. More like a very tragic story.