I Have a Question Brooke Keesling

In which Chris Robinson asks animators profound and inane questions that have little to do with animation. Today's guest is animator, teacher, industry vet, Brooke Keesling 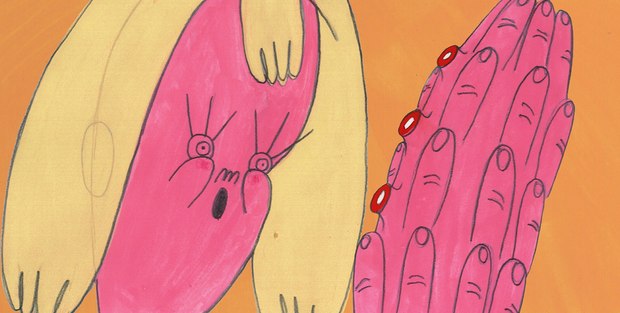 Brooke Keesling is an animation teacher, filmmaker, recruiter and overall connector of people in animation. She agreed to meet me on a couple of Disney’s old Chugga Chuggas near the Ward Kimball mini train museum out back of her father’s train store last week in April 1989. The weather was moist.

Specifically connecting people, especially artists/animators to work (that’s why I love recruiting for animation studios), in addition to watching animation or helping to create animation.

I also love to drive people around Los Angeles in my vintage convertible Bug and show them our fair city from the viewpoint of a native. There are so many hidden treasures in LA; fun people to meet, things to do and see…it’s endlessly fascinating.

Also, hanging out with my sweet husband- he’s very kind and calm, I’ve learned so much from him.

Energy is typically a good thing but sometimes I get hyper and interrupt people or don’t take as much time to listen to them as I’d like. If you’re a friend of mine and you’re reading this, I’m genuinely sorry if I’ve ever interrupted you.

Tough question! I’m swimming in art and animation books that I adore. My latest favorite is Mindy Johnson’s Ink and Paint, about women pioneers in animation. My husband’s mom is featured in this book- she was a Research Librarian for the Animation Department at Disney from the 1940s through the 1980s. We were surprised and very happy to see her inclusion in this amazing book as she lived an otherwise very non-celebrated life.

Reading that book led me to learn and practice Transcendental Meditation, which is 100% delightful.

Oooh! There are so many…I love people.

My former boss, Shannon Gans who founded and ran New Deal Studios (practical, miniature, and digital visual effects house) is high on my list for running a VFX business with style and expertise, especially as a woman in a male-dominated industry.

In general, I respect people who stay true to their own vision, regardless of naysayers along the way who try to discourage. The world needs these people.

I also respect people who remain kind and generous as they make their way to whatever version of success they deem desirable. It takes tremendous grace and maturity to remain kind in a competitive world, I’m happy to know many who have succeeded in this arena.

Impossible to pick just one, but this one is always featured when I take a road trip to Northern California (my home away from home): Astrud Gilberto’s version of Beginnings.

Am also listening to a ton of jazz right now- Howard Roberts (member of the Wrecking Crew) is one of my favorites – I have a bunch of his records that aren’t available in digital form, and I love the song Eighty-One by Miles Davis.

Of course, Jimmy Smith’s The Cat is one of my favorites and is always fabulous.

Have also been going back to some favorite 80s bands that I hadn’t listened to in a while: The Three O’Clock, Dream Syndicate, The Bangles, and other bands that were part of the Paisley Underground (a psychedelic revival in the 80s), plus X, Devo, XTC, Split Enz, OMD, the B-52s, the list goes on and on and on…

Life is hilarious on a daily basis and this is a tough question, but here’s the first thing that popped into my mind:

When I was in 7th grade, I went to a party with a bunch my high school pals at our friend Estefan Bravo’s house. Estefan’s party was at his fabulous old mansion in the Hollywood hills, not too far from Sunset Boulevard. My high school friends thought it would be funny to see how I’d handle a little bit of alcohol, so I proceeded to get tipsy for the first time (I was only eleven or twelve). I was taking a break from dancing, sitting alone in a chair, when Estefan’s mother spotted me and came over to see if I was all right. She took me by the hand and proceeded to give me a tour of their fabulous home. I hadn’t met her before, but it turned out that she was Ann Robinson, the leading lady in the 1953 film, War of the Worlds, and she had all sorts of amazing memorabilia from her film career in her house like models and miniatures of the spacecraft, and cool old posters, etc. It was so incredible to be a little bit tipsy for the first time while being taken on a tour of a beautiful old Hollywood mansion by a fancy Hollywood actress. It was not exactly funny, but it was a very surreal experience that I always remember fondly.

Tags
Interview
Brooke Keesling
indie animation
US Animation
Humour
More From ANIMATIONWorld:
Next Post
Zarkon Beware: ‘Voltron VR Chronicles’ Immersive 360 Game Roars to LifePrevious Post
The Industry’s Best and Brightest All Set to Share Their VIEW
Related Content
I Have a Question John Canemaker
I Have a Question Azarin Sohrabkhani
I Have a Question Bob Sabiston

Framestore Sets Sail on ‘1899’ with New Virtual Production Tools
Animated Characters: The Art of Babbitt – Part 1
Bruce Smith and Ralph Farquhar Talk ‘The Proud Family: Louder and Prouder’ Season 2
VFX is the ‘Thing’ for Tom Turnbull on Tim Burton’s ‘Wednesday’
We Need to Chat
Choc Chip Animation Riffs on Pop Culture in ‘The Art of Murder’
F is for Flake: The (Not So) Great Animation Robbery?
Re-VIEW: ‘Avatar: The Way of Water’ – A Miraculous Vision
END_OF_DOCUMENT_TOKEN_TO_BE_REPLACED