I Have a Question Bob Sabiston

In which Chris Robinson asks animators profound and inane questions that have little to do with animation. Today's guest is Bob Sabiston. 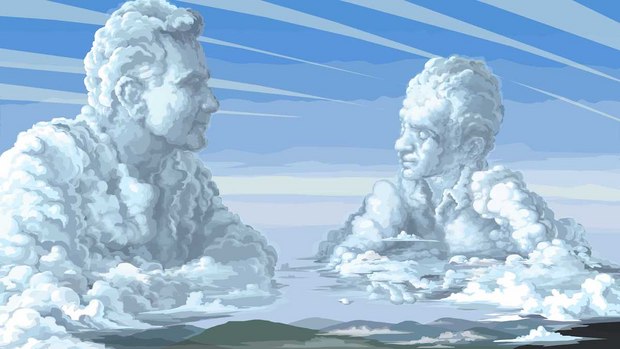 Bob Sabiston is an animator, computer programmer. He’s known for his animation software, Rotoshop, which most folks would know from the feature films, Waking Life and A Scanner Darkly. Bob was willing to meet me on cloud 9 so long as I agreed to take a drink every time I said, ‘Hi Bob’. After about 9 shots, he finally agreed to answer my questions so long as the word ‘Newhart’ was never spoken.

I hate to admit this, but Clash Royale on my phone.  Much to my wife’s consternation, I’ve been addicted to that game for almost a year now.  I’m not even very good at it.  I also love cheeseless thin-and-crispy pepperoni pizza from Pizza Hut, and coffee.

Besides the Clash Royale?  I am very risk-averse and am apparently becoming more so as I age.  I have a rigid daily schedule that ensures I always stay in my comfort zone – it’s definitely “on the spectrum” in terms of its unvarying routine.

Whew, that is a tough one.  I read a lot.  If you’re talking “favorite book”, for the past few years I’ve said my favorite book is JR by William Gaddis, because it is stylistically just completely unique and original. It’s hard to read yet once you get into it it’s kind of like a big comic book, and it’s very funny.

If you’re talking value as in valued possession, from my eighth birthday I still have a hardcover Mercer Mayer children’s book One Monster After Another, which obsessed me as a kid and definitely informed my drawing style.

If I’m being serious, President Obama – he really nailed it in terms of what a modern president should be, with humor, good judgment and integrity, which just looks even so much better in hindsight.   If I’m being less serious, Howard Stern – I’ve always admired his ability to be entertaining for hours at a stretch every day, and for what looks like fearlessness when it comes to putting it all out there.

The last song to do that for me was “The Daily Mail” by Radiohead (2011).  After years of putting out sort of moody, meandering electronic music (which I do still like), they finally released something that sounds to me like the Radiohead of old.  It begins as a slow, plaintive piano ballad but transforms into this crashing cathartic blast of energy.  The end of that song just blows me away every time.  I can’t believe it’s not even on an album.

A couple of years ago everyone was raving about this book Girl on a Train, so I downloaded it on my Kindle.  I really didn’t think it was so great, though.  In fact, it seemed very amateurish -- I couldn’t understand what all the hype was about.  So I went on Amazon to leave a bad review, only to discover that I had read the wrong book.  I read “Girl on *a* Train”, when the famous one is actually “The Girl on *the* Train”!

A couple of months later I got a call from a reporter at the Wall Street Journal.  He had done the same thing!  In fact, he saw my review and decided to write an article about all the people who read A.J. Waines’ book instead of Paula Hawkins’.  Apparently Waines got quite a sales bump from the mixup – which you can’t begrudge her, since Girl on a Train actually came out first.

The Massive Creative Fellowship Behind ‘The Lord of the Rings: The Rings of Power’
‘The Dragon Prince’ Director Villads Spangsberg Talks Toonlines and Tough Challenges
Laurence Fishburne and Steve Loter Talk ‘Marvel’s Moon Girl and Devil Dinosaur’
Taking an Old-School VFX Approach in ‘All Quiet on the Western Front’
‘Natural Habitat Shorts’: Like ‘Ranger Rick,’ But for Adults
Framestore Sets Sail on ‘1899’ with New Virtual Production Tools
VFX is the ‘Thing’ for Tom Turnbull on Tim Burton’s ‘Wednesday’
We Need to Chat
END_OF_DOCUMENT_TOKEN_TO_BE_REPLACED