I Have a Question Amanda Forbis & Wendy Tilby

In which Chris Robinson asks animation professionals profoundly inane questions about the inner workings of their existence. Today's guests are the duo dynamic: Wendy Tilby and Amanda Forbis. 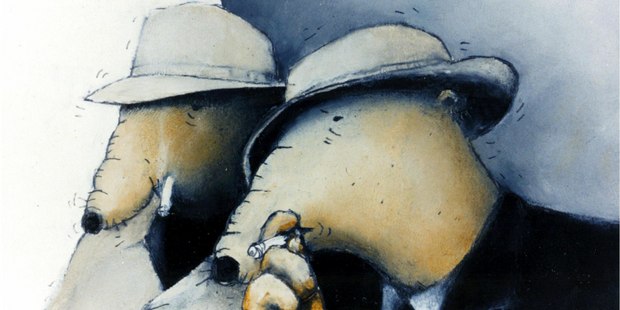 'When the Day Breaks' by Amanda Forbis & Wendy Tilby

Ah yes, here we have the much acclaimed Canadian animation duo, Wendy Tilby and Amanda Forbis (I like to constantly shift the order of their names to prevent potential power struggles). You know them for When the Day Breaks and Wild Life. You might also know that they will be feted by the Annie Awards with the Winsor McCay career contributions award.

Amanda and Wendy agreed to meet me during a rare 2007 winter performance of the Calgary Stampede. Strangely, it was a balmy summer day. We all wore shorts and winter boots. Laughter ensued as they answered now out of date I Have a Question questions.

Amanda: Diving off the dock into Flathead Lake (Montana)

Wendy: Then floating on a floatie with a gin and tonic.

Amanda: Nom de Plume. Has a nice ring to it and gets right to the point.

Wendy: Could we change the question to “What would be the title of your autobiography?’ In which case, my answer would be Overwhelmed by Cake.

Amanda: I’ve always idolized our dear and much missed friend and film editor, Haida Paul. I could not find one single thing I didn’t like about that woman. Kurt Weill’s The Seven Deadly Sins. All seven of them.

The Here and After by Jun Miyake

Feed the Birds sung by Julie Andrews (because Mary Poppins was my very first album. Of course, at age 4, I thought ’tuppence’ was another word for bread crumbs).

Smells Like Teen Spirit sung by Patti Smith (love the song, love her voice but it’s the banjo that makes me tingle).

A couple of years ago I dreamt that I was The Rifleman. I don’t have any memory of that TV series, but nonetheless, there I was, on horseback, feeling pretty great with my own theme song and everything, a little out of place riding down a modern suburban street. Suddenly a little fat guy leapt out of a parked car and started chasing me, swearing and cursing. I found this alarming, so I urged my horse to go faster but of course (because it’s always that way in dreams) he wouldn’t budge from a walk. The little furious fat guy was gaining on me and I thought I might have to defend myself, so I turned and aimed my rifle, only to find it found it was utterly useless. It was floppy. More like a licorice whip with a trigger. (If you have an insightful interpretation of this dream, please keep it to yourself.)

Once, the dryer I was using at a laundromat caught on fire. I saved my clothes but not the laundromat. Is that funny?

Another time, I was in LA working on an ad for Ron Diamond at Acme Filmworks. The company car was a 1960’s Jaguar E-Type which Ron generously let visiting filmmakers drive. It was a beauty: low slung, long nose, tiny door handles. And it attracted a lot of attention, even in a car town like LA. It once belonged to Jack Lemmon which in itself is funny, particularly as it was in the habit of breaking down. Guillaume Calop (also working at Acme at the time) once found his feet in a couple of inches of hot water due to a coolant leak. My first incident was in the parking lot of Ralph’s Supermarket. No big deal - the battery was dead and I managed to get a boost. The second, thankfully, also occurred in a parking lot. Guillaume and I had gone to a movie and inadvertently parked in a 1-hour max. lot. We came out of the show just in time to see the long nose of the Jaguar being hoisted up by a tow truck and that a small crowd had gathered to watch the spectacle. Guillaume, in his lovely French accent pleaded ‘foreign’, claiming that we hadn’t understood the signs. Miraculously, the driver took pity on us and the crowd cheered as the Jag was released. We hopped in and high-fived…. only to discover that the battery was dead. The tow truck, of course, was long gone but a bystander offered a boost. Phew. I drove Guillaume to his home up in the Hollywood Hills. After dropping him off, I coasted down and just as I was crossing Hollywood Boulevard - the busiest, nuttiest, perhaps sleaziest bit of Hollywood - the Jag DIED on me, right in the middle of the intersection. It was around midnight and, oh, did I mention it was Halloween? A kind panhandler came to my rescue and managed to push me out of the intersection to a safe spot on the side street. I was then approached by a couple. The man, wearing a purple cape and bouffant hair-do looked like Prince while the woman in a red satin corset leaned her ample bosom into my window and asked if they might give me a lift somewhere Honey? My panhandler was on the sidewalk behind them shaking his head, miming the word NO, and before I could find the damned TINY door locks, the woman had let herself into the passenger seat beside me. I can’t remember how exactly I asked her to get the f*** out but she did and they were gone and I was left with the more prosaic problem of finding a taxi which cannot be hailed in LA. My homeless buddy ended up escorting me to a payphone (this was 1995) and when the cab arrived, the driver took one look at me and said, “what in the world are YOU doing HERE?” The next morning, I called Ron who promptly rented me a nice teal-blue Nissan sedan.

Tags
Interview
Humour
Amanda Forbis
Wendy Tilby
Wild Life
When the Day Breaks
National Film Board of Canada
ACME Filmworks
More From ANIMATIONWorld:
Next Post
Nick Park Goes Neanderthal in Aardman’s ‘Early Man’Previous Post
Keep it in Motion - Classic Animation Revisited: 'It's So Nice to Have a Wolf Around the House' &...
Related Content
I Have a Question Jacques Drouin
I Have A Question Chris Landreth
I Have a Question Michael Fukushima
Oscar 2012: Wendy Tilby and Amanda Forbis Talk 'Wild Life'
ASIFA Names Winsor McCay Award Recipients