‘Human Resources’: Just Another Day at the Office, If You Happen to Work with Shame Wizards and Hormone Monsters

Creators Kelly Galuska and Andrew Goldberg share the joys of working on the ‘edgier and adultier’ ‘Big Mouth’ spin-off series, which premieres March 18 on Netflix. 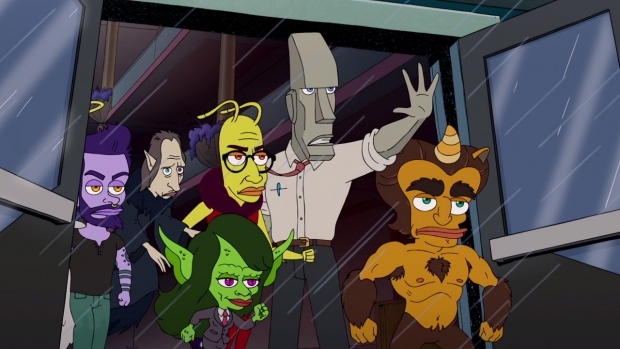 If you’re a fan of the critically acclaimed adult animated series Big Mouth, now in its fifth season on Netflix, your world is about to get a little brighter. And if you haven’t been avidly watching the hormone-laden, unabashedly vulgar, surprisingly poignant, coming-of-age program, well, you’re potentially going to be missing something else that you’ll live to regret.

How did this show come about? Is it significantly different from Big Mouth? What are the writing process and the production pipeline like? And how does Kelly Galuska’s new daughter figure into it? These are all good questions that deserve answers. Galuska and Goldberg provide them.

AWN: Did Human Resources evolve organically from Big Mouth or was it a separate idea that you later realized could fit into the Big Mouth universe?

Andrew Goldberg: It came up very organically. In the last episode of Season 2 of Big Mouth, the kids visit “puberty headquarters” to complain about their hormone monsters. And that's where we're introduced to this office for the first time. It just seemed like such a fascinating place – all these different creatures and monsters worked in an office together trying to help people be human – and it seemed like a place we wanted to go back to. We felt like there were endless stories there. As for the relationship between the Big Mouth universe and the Human Resources universe, they’re on the same timeline. People who have been watching the show will see some of their favorite characters in new and surprising ways. AWN: Are there any significant differences between the two series?

Kelly Galuska: Human Resources has a lot of the Big Mouth raunchy vibe to it. But when we're telling stories that go beyond puberty, inevitably, we end up getting to more emotional places. This season runs from birth to death, essentially, because we have our creatures from the moment that we're born until the moment we leave this planet. So naturally we delved into different territory than Big Mouth has. Because while some of these subjects have been covered on Big Mouth, they're from the children's point of view, and not from the point of view of the mother giving birth or the man who's losing his mother. So, it makes for a slightly different tone than Big Mouth.

AWN: You’ve both had an amazing run on some great shows, including Family Guy and BoJack Horseman. What did you learn on past series, from a writing and/or producing standpoint, that you were able to bring to this show?

KG: For me, this show is so directly a culmination of all of those experiences. Being a part of BoJack Horseman changed me as a person and as a writer. I feel so lucky to have been a part of it. We delved into some really deep and dark subject matter on that show and, as a result, we had a room where we were talking about that stuff. I was talking about things that I hadn't really explored with my own friends and family. And just seeing how dark you can go and how silly you can be in the same episode. It's something that I’ve really taken with me in everything I've done afterward.

And then going to Big Mouth changed me equally, because I expanded my horizons in terms of how I thought about my past, about growing up, and how I thought about sex, for sure. I mean, Big Mouth changed the way I will raise my daughter. And so, for me, those two experiences are exactly what Human Resources is. It's pushing the boundaries with regard to sex and everything else, so that you're demystifying these things that can be embarrassing or hard to talk about. I’ve learned that the more you talk about them, the easier it is – and the easier it is to laugh at them, both the silly things and the dark things. AG: I think Kelly's child was really gestated in the Big Mouth writers’ room. Kelly sat there, very pregnant, and we assumed that her daughter would come out like, “Hey, what's up, fuckers?” (In fact, she came out a normal, cute baby.) As for my experience, I started at Family Guy and really learned how to make an animated show, and how important the visual elements are, and how you can really use animation to do things that you can't do in live-action. I really got a paid education on how to make animation at Family Guy, and I brought that to Big Mouth. And it's been really exciting to pass on that knowledge to Kelly and to watch her run a room and tell the stories that she's most passionate about.

KG: I feel so lucky that, as a first-time showrunner, I had the other creators with me – and Andrew in particular, leading the way and teaching me along the way.

AG: It's a huge job to run a TV show, and I feel badly for the people who do it alone. There's something about our organism, as a four- or five-part person, that makes it so much more manageable, both on a creative level and on a personal level. AWN: From a production standpoint, are you able to share assets, pipeline talent, and so on with the Big Mouth folks?

AG: There’s a lot of integration. Many of our artists work on both shows and editors work on both shows. And it's been really great for us because, in the past with Big Mouth, at the end of a season, one of our favorite artists might go work on another show and fall out of synch with our schedule, and maybe be lost to us for a season or two. But now we have this year-round pipeline, where we can keep people from leaving. I think that it works really nicely for the artists too. They have a great rhythm and a great sense of teamwork.

AWN: Big Mouth has broken just about every sexual and cultural taboo that I can think of. Have you had any pushback, either from the powers that be, or from any of the writers? Are there lines you haven’t been able to cross?

KG: That's an interesting question. We have such a great, diverse group in our room that it’s like everyone has their own line, and it's about different things. But while we keep pushing these boundaries, I think that line keeps getting further and further away. We just get more and more open with each other. And there are times where one person will say, “I don't know if we should do that,” and they're convinced otherwise. But there are other times where it's like, no, this is one step too far. Because we have this open environment where we trust and respect each other, we can usually gauge what’s okay and what's not before it gets out of the writers’ room.

AG: One of the cool things about animation is you have all these different steps in the process – whether it's when you're at the table, or you're recording, or looking at storyboards, or at the animatic, or the color rough cut – and we try as much as possible to watch these things together. Because when you're in a group, it becomes very clear when something's not funny. So, in a way we're our own focus group. AWN: What have been the biggest challenges for you in the first season? And, assuming you get another season, how will you try to avoid them in the future?

KG: One of the challenges in this show is that there are so many characters. And that’s very difficult in telling stories, of course, because all of these creatures need dialogue. But they also all look different and they all move differently, which makes animating the show at least as big of a challenge. That's something that we're constantly bumping up against and something that we'll work on if we get to do this again – just problem-solving in terms of how you block these scenes out when you've got five creatures surrounding one human.

AG: They're all different sizes and proportions. They have a different number of limbs. Some of them walk, some of them float. So, for instance, when a lovebug turns into a hateworm, we always have to remember, okay, it doesn’t have arms anymore. We’re now dealing with a creature that doesn’t actually require prehensile limbs.

Animated Characters: The Art of Babbitt – Part 1
Bruce Smith and Ralph Farquhar Talk ‘The Proud Family: Louder and Prouder’ Season 2
VFX is the ‘Thing’ for Tom Turnbull on Tim Burton’s ‘Wednesday’
We Need to Chat
Choc Chip Animation Riffs on Pop Culture in ‘The Art of Murder’
F is for Flake: The (Not So) Great Animation Robbery?
Re-VIEW: ‘Avatar: The Way of Water’ – A Miraculous Vision
‘Kung Fu Panda: The Dragon Knight’ Celebrates a Special Lunar New Year
END_OF_DOCUMENT_TOKEN_TO_BE_REPLACED