Human After All: The Social Satire of Chintis Lundgren’s ‘Manivald’

Estonian director’s 2D-animated short film making waves on the festival circuit is a lightly absurdist drama that showcases the delightfully dry humor characteristic of her homeland. 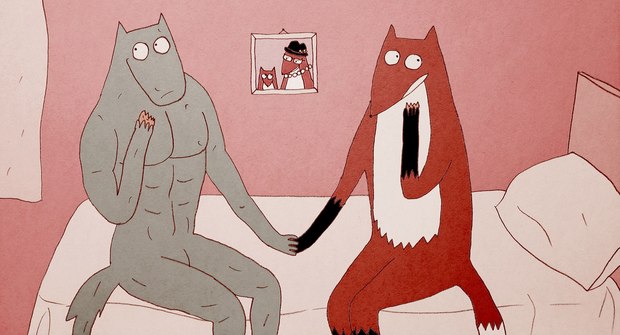 Chintis Lundgren’s Manivald has been making waves on the festival circuit -- including at Annecy, Animafest, and Anima Mundi -- for over half a year now, and it’s not done yet. The short, which was nominated for Best Background & Character Design in an Animated Short Film at the inaugural Emile Awards, is now on its way to Park City, where it will be the first Estonian animated short to ever run at Sundance, according to Lundgren.

The 11-minute short is a co-production between the National Film Board of Canada, the director’s own Chintis Lundgreni Animatsioonistuudio, and Adriatic Animation, the Croatian studio Lundgren founded with Manivald co-writer Draško Ivezić. Manivald is only the second short film Lundgren has done with a team; previously, the animator worked completely alone, with the exception of needing music from an outside source.

Manivald, in the same vein of Lundgren’s previous work, is both absurdist drama and social satire. The eponymous fox, an academic drowning in various degrees, is unemployed and depends on his controlling mother for his livelihood. Manivald is a character the young and educated may find all too relatable. “I have so many friends who have doctorates or master’s degrees in something connected to culture, and it ends up being totally useless,” says Lundgren. “They end up working in a bar or doing physical work or whatever.”

The tense mother-son relationship is pushed to a breaking point when both Manivald and his mother fall for handyman Toomas, a handsome wolf with pecs and abs to spare. The ensuing conflict is the final nudge Manivald needs to leave home and start a life of his own.

Lundgren is no stranger to the world of Manivald and his friends. For years, she has been posting single-panel comics called Manivald and the Absinthe Rabbits on Facebook, a series about a ragtag bunch of animals including a trio of rabbits who are -- you guessed it -- always drinking absinthe, and therefore often appear to be more than a little out of it. Lundgren’s Vimeo page is bursting with little snippets of animation experiments featuring animals from Manivald’s universe.

The Manivald director, who is from Estonia but now lives and works in Croatia, grew up watching the works of Priit Pärn, a famous Estonian animator perhaps best known for his 1987 short film Breakfast on the Grass. “Every Estonian grew up watching his films,” says Lundgren. “We didn’t see any Disney films or anything like that. Children in the Soviet Union mostly would watch artistic films that were not even made for children, including a lot of things from him.” Pärn and his wife Olga actually served as consultants in the writing process for Manivald, and Lundgren credits him as being a primary influence, especially on her comedic tendencies. “It’s a very Estonian type of humor,” she says of her short’s dry, ironic tone.

“A bit dry, maybe a little dark,” describes co-writer Draško Ivezić. “But also without too much noise. It’s quiet, and then you start to laugh when you understand. We try to make human drama, but with comedy elements, so people, through laughing, can maybe think about more serious things.”

It’s true that Lundgren’s work bears a tonal and topical resemblance to that of the Estonian animating legend, but her style is very much her own. Lundgren, who did most of the animation for Manivald by hand herself, with a little digital assistance from Ivezić and coloring aides, says she is always disconcerted by hand-drawn 2D animation where moving characters in the foreground contrast with stock-still backgrounds. “It feels very hard,” she says. “Something feels wrong.”

In order to combat this rigidity, Lundgren has developed a process in which she draws each background six times, and then animates it. “Because the lines are moving, it makes it look alive,” she explains, and laughs. “Thanks to that, people don’t even notice how little is actually animated in the film. It makes it look more organic.”

Lundgren’s traditional animation method becomes all the more impressive when you learn that she is self-taught. “I didn’t study animation, so when I started playing around with it just for fun, I had some idea of maybe how it’s supposed to be done, and that’s how I tried to do it,” she says humbly. “I just kept doing it the same way, because it works for me.” Lundgren and Ivezić have big plans for Manivald and his friends. The pair is currently developing a series for which Manivald serves as a kind of pilot. “After Manivald leaves [his mother’s house], he will end up living in an undercover gay bar called The Hedgehog’s Closet, which is run by a cross-dressing hedgehog called Tiit together with his very conservative wife Brunhilda, who doesn’t even know that it’s a gay bar, or that her husband is a cross-dresser,” reveals Lundgren. The series’ cast of characters will also include the rat Herman H. Rott from Lundgren’s 2015 short Life with Herman H. Rott, which won Best Narrative Film at last year’s GLAS Animation Festival.

The plan is to have the series picked up by a U.S. network, and they already have some interest, says Izević. The creative team also has high hopes for a positive reception at Sundance, based on the reaction of the largely North American audience at Ottawa, where Manivald won the award for Best Script.

“This was the best reaction ever,” says Izević of Ottawa’s response. “I laughed so hard at our own film, because of that audience. It was so crazy.”

Asked if we’ll get to see Manivald and his mother reconcile in this series, Lundgren laughs. “It’s actually going to get worse,” she says.

“Manivald’s mother also has some problems that she has to resolve with herself, and her sexuality,” adds Ivezić. “But I think there’s a chance they will [grow to] understand each other.” How ‘Luck’ Applies a ‘Less is More’ Approach to Comedy
Z is for Zagreb: The Animafest Zagreb Exhbition 1972-2022
Dude! - ‘Rise of the Teenage Mutant Ninja Turtles: The Movie’ Arrives
‘Super Giant Robot Brothers’: A Milestone in Virtual Animation Production
‘Luck’ Aims to Bring Hope to Kids In and Out of Foster Care
Pre, Tech, and Post: The Many ‘Vizings’ of ‘Chip ‘n Dale: Rescue Rangers’
Hammering Out the VFX in ‘Thor: Love and Thunder’
END_OF_DOCUMENT_TOKEN_TO_BE_REPLACED