At the recent SCAD AnimationFest, the streamer’s VP of Adult Animation Originals, who was honored with the festival’s Award of Excellence, shared that you must reach for the stars, take risks, dare to fail… and earn your fart joke. 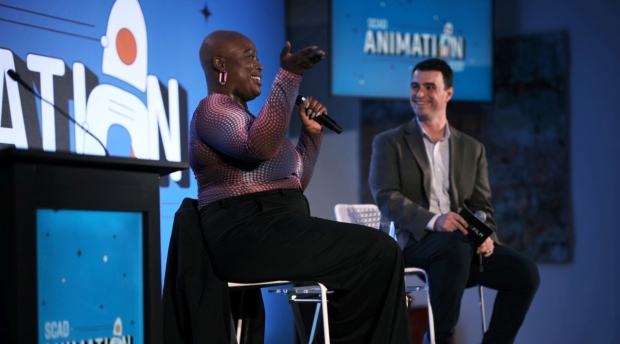 As a 2022 SCAD AnimationFest Award of Excellence honoree who was also named among the top 150 Black Women in Hollywood by Essence Magazine, Hulu’s VP of Adult Animation Originals Kelci Parker has proven her place in the entertainment industry through both accolades and portfolio. But long before she began overseeing development of shows like Solar Opposites, Hit-Monkey, and Futurama, Parker’s life calling started taking shape during a childhood steeped in TV animation.

“I was so obsessed with Nickelodeon as a kid,” shared Parker - after receiving her award - during a panel at this year’s SCAD AnimationFest. “I have a younger sister and, when she was a baby, my mom would be like, ‘We have to take your sister on a walk,” and I’d be like, ‘Well, we can’t because Rugrats is on.’ She was like, ‘Ok, as soon as Rugrats is over, we have to go.’ And I’d be like, ‘We can’t because then Doug starts.’ She was floored that I had the entire Nickelodeon programming schedule memorized and now I’m like ‘Look mom, it paid off.’”

The SCAD AnimationFest, recently held in-person at the Atlanta branch of the Savannah College of Art and Design, is a three-day celebration of animation where animators, directors, alumni in the industry, and executives like Parker are invited to participate in panel discussions that provide current students an in-depth look at careers they will soon embark upon.

To Parker – an award-winning screenwriter who now oversees both development and current programming efforts for the Hulu Originals slate – her most important role at the streamer is going to bat for creator voices that are underrepresented and entertainment genres that are misunderstood, including hard comedy animation that Parker says is “a great escape, while also telling interesting and relatable stories.”

“I hope and plan to continue to push the hard funny envelope,” says Parker. “I want things to feel provocative and edgy, but not just for the sake of it. We love a fart joke but earn your fart joke… Netflix’s Tuca & Bertie does a great job of this, where it's a silly animated show, the girls are going out and partying, but they're also going to talk about sexual assault, and approaching that in a way that can bring comfort to someone that's experienced this sort of trauma. And I think that's smart.”

Parker’s journey into animation was influenced early on by her family. Growing up in the small, Midwest town of Albion, Michigan with a mother who taught elementary art, a love of visual art certainly ran through her veins. But it was Parker’s older brother who helped widen her interests from animation to the wonderfully weird world of comedy.

“My brother’s been a huge influence on my comedic sensibility and it’s nice because he's actually a development executive at ABC Signature and we worked at Comedy Central together,” says Parker. “I really think I was following in his footsteps, asking like, ‘What are you doing? That's cool.’ Or I’d be 12 and it'd be like, ‘Your friends are cute. What are you guys watching?’ just trying to hang out with the boys.”

Majoring in screenwriting at the University of Michigan in 2011, Parker had planned to create dramedy features like Little Miss Sunshine and Juno. She was working as a personal assistant to Spike Jones on Bad Grandpa when she met Annapurna Pictures founder Megan Allison, who was bringing in all her favorite directors and letting them direct their passion projects. Parker decided that’s what she wanted to do – minus having the money to start her own company – and Allison advised her on the route to becoming a development executive.

Having worked on Loiter Squad at Adult Swim, Parker also realized her passion for TV comedy. After applying for an assistant position at Comedy Central, getting the job in 2014, and rising through the ranks as a coordinator and then director, by 2020, Parker gained a deeper understanding that comedy, especially animated adult comedy, was just as much an underdog in the industry as she was: a young Black woman, from a small town, with alopecia, making her way in a predominantly white male’s business.

She continues, “But I’m trying to get people to take adult animation seriously, and subvert expectations of the adult animated space, even when telling our fart jokes. And there's a hard balance there. But I feel really lucky to be in this position and to have a job like this and, for the past 10 years, to have worked with great people who believe in me and believe in the stories they're telling. They have helped to amplify my voice and allowed me to amplify others’ voices.” Hulu hired Parker as Executive Director (and eventually Vice President) of Comedy Originals in January 2021 before her current position as VP of Adult Animation, and it’s no coincidence that Hulu’s adult animation comedy slate has been stellar the last two years.

There’s Hit-Monkey, the western adaptation of a Japanese manga about a monkey guided by the ghost of a professional assassin. And Solar Opposites, about a group of aliens who crash-land on Earth and, in trying to fix their ship to return home, find that they’ve built a fairly appealing family life (and rather extensive ant farm – The Wall - filled with shrunken neighbors) in their human-inhabited suburbs, definitely doesn’t follow the typical and exhausted family dynamic. And lest we forget M.O.D.O.K., a supervillain and family man who struggles to balance both, is also a far cry from Marvel’s more mainstream stories.

But these are some of the very reasons Parker’s interest in such animated shows was peaked.

“When Rick and Morty first started, they didn't know that was going to be the hit that it was, but they were willing to take that shot and you have to be willing to take those sorts of risks,” she says. “Leading with comedy is what lays a welcome mat to bring everyone in. Even if you're not necessarily the biggest animation fan, you can relate to what these shows are about. Like with Big Mouth, everyone's gone through puberty, and everyone knows a bit of how that feels. And then they capitalized on the medium of animation by bringing in the hormone monsters and making it even more heightened and crazy.” But there’s so much more to these shows, where even a series about a woman bearing Satan’s daughter (FXX and Hulu’s Little Demon) can tell a touching story about the unconditional love and fierce devotion of a mother for her child. In fact, sometimes, it’s the raunchy shows that are better able to drive home these golden nugget messages.

“Even though they're animated, these shows are still talking about relatable things,” says Parker. “Finding that unique relatability is really important, and then I always want to fuse it with comedy because who doesn't want to laugh all day? We're not curing cancer, but we may be bringing someone a laugh as they go through treatment. We're not changing the world with a grandiose political statement. But we are sending messages through story, design, score, and the performance within our work.”

Parker also believes the importance of her job is to establish a tone where makers in media can tell the stories they want to tell and give audiences the chance to experience the world in a different way that's “setting you up to be your authentic self and not being polarized into one small section of what you've been told you should be.”

“One of my friends is also a woman of color, and she's a director and a writer, and there are some days where we have a hard day, where one microaggression set us off, or microaggression about a show that happens to have an underrepresented character can set us off,” says Parker. “Whenever we have those days, we text each other and she always says, ‘You’ve got to remember we are the pioneers. And if we're not kicking down these doors, there's not going be someone else to do it. So, we have to do it so that the people who are coming up behind us have this opportunity.’” It’s a weight to carry, making sure that diverse voices and regularly discounted stories both have clear paths of opportunity and are taken more seriously by the industry as a whole. And the importance and difficulty of the matter is not lost on Parker.

“Comedy is subjective, so I always feel extremely lucky to be in a position that has made me the arbiter of these things,” she says. “I don’t know how it happened, I don’t know who allowed this, but I’m grateful.”

She adds, “If you're giving people the opportunity to look at something through a comedic lens, maybe they'll understand it in a different way. If we can lean into that and do more of that in the animated space, and even branch out of what we've typically seen and who's typically telling you stories, that would be great. Hopefully, we can continue to push those boundaries in a positive way.”

As Parker closed out her AnimationFest awards speech, she shared with the SCAD Atlanta students what she considers the secret of her success through 10 years in the industry.

“I'm challenging all of you to find those doors and open them for people,” she encouraged. “A university like SCAD is uniquely positioned to affect change. With over 9,000 students and alumni working across fields of creative animation and development, you all have the power to open doors for the next generation and be thoughtful of how you do so. Think big and dream bigger, reach for the stars, take risks, and dare to fail, be empathetic and kind to each other, and you'll be on your way to incredible success.”