Executive producers Greg Weisman and Brandon Vietti discuss how the show’s characters experience and deal with serious issues, such as survivor’s guilt, coping with death, and personal trauma, in the second half of the HBO Max series’ fourth season. 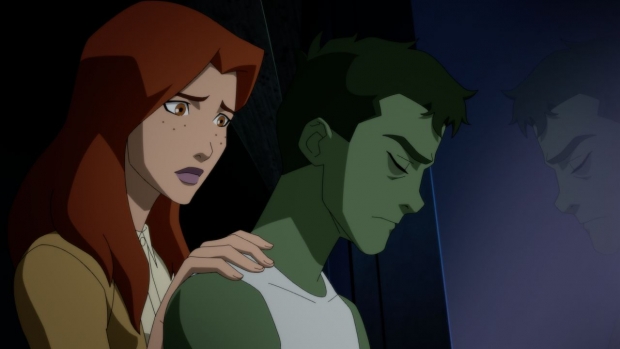 Back in December, Young Justice: Phantoms creators and executive producers Greg Weisman and Brandon Vietti left fans on the precipice of a massive cliffhanger; Superboy Connor Kent might actually be alive, his spirit shown calling out from somewhere between time and space.

“That third arc, built into this sort of big global crisis and crescendo that ends with this cliffhanger moment with Connor, that felt like a really good moment to break for a few months and have the audience go crazy,” says Weisman, known for his work on The Spectacular Spider-Man and Gargoyles. “Which is one of the great joys of my life.”

Vietti adds, “We're always asking ourselves as we go through each story, each episode, and each season, ‘How are we going to top what we did last time?’ And I think we did. I think that the scale and where we reach within the DC Universe exceeds what we've done in the past. It was an incredible production challenge that everybody rose to meet. And I cannot wait for people to see the results of all of that, because it's new. It's big. It's different.”

“Season 4 is set 10 years after Season 1,” explains Weisman. “Dick Grayson was 13 in Season 1 and is now 23. Kaldur was 16 and is now 26. Artemis was 15, now she's 25. If you enjoyed watching YJ, we are doubling down our focus on that original cast of characters and showing how they've grown and changed over 10 years. And so, if they haven't watched any of Season 4 yet, I hope they'll give it a shot because these characters have really grown. They've really evolved.” The show’s fourth season has been a wild ride thus far, taking us face to face with the near destruction of Earth and death of one of the show’s key characters. AS a result, fans are seeing new sides to Young Justice’s other key heroes, including Garfield, who is dealing with PTSD and has sunk into a deep depression, alienating himself from the world while throwing himself into hefty amounts of medication.

Meanwhile, the series also begins diving, literally, into the world of Atlantis with Kaldur'ahm (“Kaldur”) who is coping with the death of Connor. Connor, in turn, gets his own spotlight in the new episodes that show the young hero going through major internal crises of his own, questioning his identity and worth to his team and family.

“For people that followed along through the first half of Season 4, there's a lot of extra build in our opener for the second half of the season,” says Vietti, who previously worked in the art department for shows like The Batman and the animated 2003 series Spider-Man. “We've had a long running thread with Garfield Logan that continues to escalate to really, I think, a potentially dangerous point for him. We get to really dive into the home life and relationships of Kaldur in Atlantis, and we pick up a new thread with Connor, who has been removed from home and family. There is a particularly good chemistry between those three storylines regarding family and home and where each of these characters is at mentally.”

He continues, “Their psychological journey is a huge focus through the course of these first four episodes of the second part of the season, and really can't be missed. The second part of this season was very interesting to put together because of the number of personal issues we were going into for each character.” For Vietti and Weisman, it was important to age their characters’ stories as the characters themselves age, their struggles becoming as complex and mature as they have become over the last four seasons. While they’ve always worked with advisors on the show, aiming to present some of the most authentic and well-rounded characters in the universe of superheroes, the creators say it was even more pivotal to bring in experts for the second half of Season 4.

“We wanted to get as authentic as we could within the context of a superhero narrative about post-traumatic stress,” says Weisman. “We did a lot of research and got a lot of expert advice this season, even more so than we've done in previous seasons. We were aware that we were dealing with triggering elements, and we wanted to make sure we were doing everything we could to get it right.”

Working with Dr. Janina Scarlet, who specializes in treating patients with PTSD, Vietti and Weisman unravel these heroes on screen to reveal the very worn and even damaged human nature beneath.

“We did talk about military PTSD, combat, survivor's guilt,” explains Weisman. “We talked about personal trauma, the difference between childhood trauma and adult trauma. We talked about all these things as part of what our characters are going through and how they might survive it. We also talked about best practices, and we talked about worst practices. It's not always easy for us human beings when someone's hurting, particularly if that person is being a jerk. We just think, ‘Wow, what a jerk.’ And we don't necessarily look beyond that to ask ourselves why, and whether that person needs help. That, in and of itself, was also an issue that we give a lot of thought and discussion toward. And how the responses of other people help or harm the process of healing.” But it wasn’t just experts Vietti and Weisman used to help assist with the storytelling. They also relied on their team’s own experience to guide the narrative, welcoming input from writers and other staff members who were willing to share their stories.

“I think it fostered a number of really interesting and informative conversations just among our own crew, and I think it was a time when those conversations were really needed,” says Vietti. “So much of our fourth season was produced at home, where we all were fortunate enough to keep working, and find ways to digitally produce the show, communicating through zoom meetings, and whatnot. But we were all still disconnected from everybody in the world. It’s a new experience to be so physically disconnected from everybody around us -- friends, family, and co-workers. As a crew, we came together in a lot of unique ways that I've never really experienced before, through a lot of strange times in the world, to make a unique and, hopefully, special show. And I don't use that word casually.”

Young Justice has always tried to form a real connection between its audience members and the characters in the series, and Vietti hopes Young Justice: Phantoms’ second installment strengthens that bridge and deepens the bond. It certainly has for him, Weisman, and their team.

“We all love and care for these characters and for the show that we make,” says Vietti. “And, to some degree, as we write the stories for the characters, we're also going on these journeys ourselves. I think we've tried to make something special that will entertain our viewers and help show them things maybe they haven't experienced and give them something to learn from as they watch our characters in the show learn about the world around them and learn about themselves as well.”

Choc Chip Animation Riffs on Pop Culture in ‘The Art of Murder’
F is for Flake: The (Not So) Great Animation Robbery?
Re-VIEW: ‘Avatar: The Way of Water’ – A Miraculous Vision
‘Kung Fu Panda: The Dragon Knight’ Celebrates a Special Lunar New Year
END_OF_DOCUMENT_TOKEN_TO_BE_REPLACED