In a quest to make new breakthroughs in 2D animation, the Director of Studio Ghibletz, Nathan Smith, shares his workflow for simulating classic hand-drawn animation in Cartoon Animator 5. 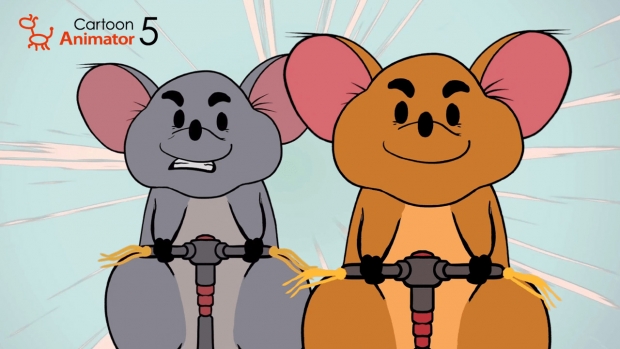 Greetings my fellow 2D animation enthusiasts! My name’s Nathan and I’m a member of Studio Ghibletz.

The moment we laid our eyes on spring bones we had a revolutionary idea. Most CTA users prefer a crisp art style, but Studio Ghibletz opted for something messy—something experimental. We developed a new animation design virtually indistinguishable from hand-drawn.

We created a sprite character that squashes and stretches. This alone is revolutionary in the world of rigged cartoon character creation. Studio Ghibletz, however, wished to take this concept further. So, we created characters with scratchy line art.

The CTA5 Features that Enabled our Experiment

CTA5 allows you to apply this principle using FFD (free-form deformation) and spring bones. FFD enables a sprite character to stretch and squash, allowing you to emphasize their actions. It’s also useful for putting characters and props into perspective. The morph tool—the precursor of FFD—was available in CTA4. However, it only worked with props. Now you’re able to morph entire characters.

Next, we marveled at spring bones. We watched hats bounce, jello jiggle, and whiskers twitch. We then decided to push spring bones to their limits. We weren’t satisfied with funny noses and springy tails. Nay brethren! We wanted entire characters to bounce like Micky Mouse!

I pitched a new style of animation design: a character with multiple sprites for each body part, each with slightly different line work. Then, when the character moves, we’d roll through the sprites like an animated prop. In my head, I imagined characters like Baloo from the Jungle Book or Madame Medusa from The Rescuers, characters with intentionally scratchy—almost messy—line work. Easy, right? Wrong! Rick and I quickly discovered that only one sprite per slot would morph. This means if the character has three sprites, only the first will stretch and squash. This wouldn’t do.

After hours of trial and error, we stumbled across a solution. We stacked three characters, each with different line art, then put them on a visibility loop. This held the stretch and squash and allowed for scratchy line work.

To recreate this style, animate the first character, then duplicate it twice. Next, replace the sprites in the duplicated characters. Finally, loop the visibility so that the characters flash through in quick succession.

This style delights me. It combines frame-by-frame drawings with modern animation software. Traditional hand-drawn animation presents the characters from multiple angles. Sometimes they’re shown from the back, sometimes they're in profile. Traditional animation also uses insert and specialty shots. To achieve this look, Mouse Bros combines over 30 CTA files. Each file contained a specific angle or movement.

It’s a huge amount of work, and you must compile the footage in Premiere Pro. This, however, is the price of creating a cartoon with a high production value.

Imagine Mouse Bros from one angle. They race across the screen in profile, jump the canyon like Mario, then converse in a single angle. Would that be interesting? Would it tell a story of hunger and betrayal? No!

Failure to animate from diverse angles traps many CTA users (myself included before I was corrected). If you only tell a story from one angle, it’s flat and boring and the mark of a low budget.

Additionally, you can hide a lot in the cuts. For example, most animated 2D characters don’t turn well. In the past, we’ve created characters like Jowl, the grumpy bird that came with CTA4. This allows for smooth, natural turns. For larger, more complex characters, however, this doesn’t work. Instead, you can “turn” characters between cuts.

Imagine two characters facing each other, and you want one of them to turn away. Cut to a different camera angle, then place the character in the desired direction. To the audience, it appears that the character “turned” during the cut.

Finally, use framing to toy with viewer expectations. As Kevin Keniry, one of our writers, explains, “In the establishing shot of Mouse Bros, we showed the mice holding the handlebars. This shot was the setup for the conflict of the episode, but this focus also allowed us to flip the viewer’s expectations. The handlebars were attached to pogo sticks rather than motorbikes.” To make the most of CTA5, you must tell a good story. As Cody Marcotte writes, we always want to elicit an “emotional response, from happiness to sadness and everything in between.” And in Mouse Bros, we decided to go Shakespearean.

We go to great lengths to perfect a character’s voice, and we have fun doing it. As Peter, the voice of Richard, facetiously writes, “I look the character in the eye and he begins to whisper. The character chooses the voice, and my body is but a vessel.”

Phil, the voice of Duncan, shares a similar philosophy. He writes, “Being a great voice actor means that you’re able to fully immerse into the role, bring life to a character, and put on a believable performance as them; though to do so, it’s important to remember to research your character, practice your lines, and to be confident in your performance.”

To build toward the climax, we created an intense race sequence. We’d never before engaged in visual storytelling. Our stories are generally carried by dialogue. With Mouse Bros, however, we wanted to expand our horizons.

For the dialogue, we drew inspiration from the Lion King. We wanted to recreate the intensity of Scar and Mufasa. This is why our mice bear the names of two Shakespearean favorites: Richard and Duncan.

We opted for the traditional CTA pipeline: Photoshop—CTA5—After Effects. We brought the characters into CTA5 from Photoshop to create the bone structure. However, we exchanged the sprites in the additional characters (the ones needed for the line art loop) manually. For our next project, we’ll make use of vector characters. We’ve never worked with vector-based sprites, and we were already using experimental techniques, so we decided to stick to what we knew by using raster images.

We animate in CTA5, then polish in After Effects and Premiere Pro. When we bring our work into After Effects, we add subtle, final touches to the animation.

Fun fact: all of the shadows were done in CTA5 using the FFD tool. With FFD, you can effortlessly morph shadows. For example, the shadow beneath the mouse on the pogo stick deforms as the mouse jumps. This gives the characters additional weight and depth.

We then finished editing in Premiere Pro. Mouse Bros combines over 30 unique shots and angles, compiled with Premiere Pro into a cohesive story. In addition to going full throttle with the animation, cartoon character creation, writing, and voice acting, Rick composed a symphony. Originally, Rick wrote a rock n’ roll soundtrack, but saw Mouse Bros’ intro and decided it needed an orchestra. Rick said he wanted to “modernize what Looney Tunes did.”

In Mouse Bros, each scene is synced with the music. This elevates the action and tells the audience what to feel. The violins duel as Richard and Duncan race, and the piano fizzles out when Richard realizes they’re racing for American cheese instead of cheddar.

This isn’t feasible for many animators, especially those who work solo. However, you’ll find a wide variety of royalty-free music on YouTube. While this limits your ability to sync the music like in Mouse Bros, the right background track will still elevate your animation. CTA5 enabled Studio Ghibletz to pioneer a new animation technique. We pushed the limits of what’s possible with rigged characters, and Mouse Bros is only the beginning. Spring bones and FFD change everything.

I believe Mouse Bros merely scratches the surface. My hope is that this animated short inspires other CTA users to experiment with spring bones and storytelling.

If you’re looking for animation software, CTA5 has all the tools you need. Roughly one year ago, I knew nothing about animation. This is CTA’s greatest strength. It puts professional-grade tools in a package accessible to beginners. In a year I went from stick figures to Mouse Bros. With CTA5, you can too.

Nathan Smith and the Studio Ghibletz team are storming the industry with new animation techniques, witty stories, and a whimsy disposition.