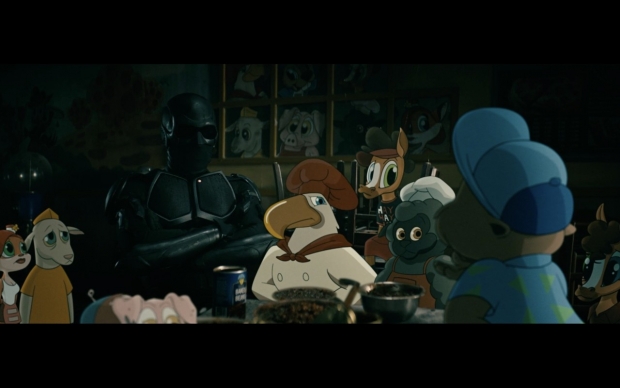 For decades, animation has served as an effective means of peeling away the many layers of trauma, from a kidnapping in The Rescuers and witnessing a parent’s murder in The Land Before Time, to grieving a child’s death in If Anything Happens I Love You and living through war in Kono Sekai no Katasumi ni (In This Corner of the World). Creator Eric Kripke decided to employ the concept of 2D animation as a therapeutic device, weaving it into the third season’s final episodes of his Emmy-nominated Prime Video series, The Boys, with the help of animation studio Six Point Harness.

All episodes of Season 3 of The Boys are now available on Prime Video.

“Eric wanted to mix Scorsese-style violence with cute and cuddly Disney animation characters,” says Musa Brooker, creative director at Six Point Harness, who served as supervising director on the project. “That was sort of our marching orders.”

Animation director AnneMarie Roberts adds, “Integrating 2D animation with live-action is always a bit of a challenge, especially when the live-action and animated characters need to interact. Thankfully, both Eric Kripke and Musa had very clear visions of what they wanted, and my team and I did our best to bring that to life.”

Episodes 307 and 308 of The Boys – a series that follows a group of vigilantes set out to take down corrupt superheroes who abuse their superpowers – covers character Black Noir’s past trauma with another character called Soldier Boy, who brutally attacked Black Noir not once, but twice, leaving Black Noir’s face, which is almost always covered in the show, horribly disfigured.

When Soldier Boy makes his return after being taken away by Russians, Black Noir goes into hiding at Buster Beaver’s, an abandoned children’s pizza place, where he is joined by a slew of 2D-animated cartoon animals who aim to help Black Noir face his past with Soldier Boy. “Old is the medium of mixing live-action and animation, dating all the way back to the Alice Comedies that Walt Disney did when he was starting out before Mickey Mouse, or Out of the Inkwell series from [Max] Fleischer,” notes Brooker. “The idea of that Who Framed Roger Rabbit and Mary Poppins style, mixing those genres, that's how Eric saw it.”

He adds, “I am an old-school comic book nerd from way back, since I was in the fifth grade. And so I actually was a huge fan of the show. We, as a studio, presented our vision and why we thought we would be the right fit, showed some examples of similar work that we had done and other work that we could draw inspiration from. We won the bid, and then we were off to the races.” Working closely with Kripke, Brooker and his team pulled together storyboards for the scenes with Black Noir and his band of cartoon animals, referencing not only films like Who Framed Roger Rabbit and Mary Poppins, but also comics like Spider-Ham, which features a pig version of Spider-Man and a cat version of Captain America.

“There's also a group of superheroes from the DC universe called Captain Carrot and His Amazing Zoo Crew!, which are, again, animal superheroes,” says Brooker. “These were some of the comics that I loved growing up.”

According to Brooker, integrating nostalgia into a story about trauma was the best way to kindle that hauntingly heartbreaking atmosphere as viewers see Black Noir enter a dilapidated children’s restaurant, pouring baked beans onto old, crusty servings of baked beans and serving them to cartoon characters identical to those illustrated on the peeling wall murals.

“Eric wanted them to be very cute, with the idea that what they did became creepy and violent and scary,” says Brooker of the cartoon critters he and his team designed and animated. “And they look very cute, very reminiscent of Chucky Cheese characters. But I think the creepiness really comes in when you see [Black Noir] interacting with them, and when you see the warn-down Buster Beaver’s pizza place, the chipped paint, and it's clearly abandoned. So we weren't really thinking of how creepy these characters would be in design, it was really about how their actions would be a little unsettling.”

And while it’s a bit eerie to see cartoon beavers, horses, pigs, eagles, and sheep literally come out of the woodwork to help a masked adult face his fears of abuse, the characters Six Point Harness designed were also meant to elicit sympathy.

Brooker also believes that nostalgia and trauma are linked more often than we realize.

Getting to build cartoon characters for a superhero series, while referencing comics from his childhood, allowed Brooker to work through trauma of his own – losing his father in the midst of production. “One of the complicated things about this project for me was that, as we were really getting going in the animation, my father passed away,” he shares. “One of the reasons I loved comic books, and I [still] love comic books, was because of my father. He grew up in a Golden Age of comics. He was a painter and a fine artist, but always had a love of pop art and pop culture and comic books and superheroes. When I was younger, he used to show me how to draw Superman and Batman. And so, for me, that was the connection that I felt. This love that I have for the genre excited me throughout the process. And that is in large part because of my father and the love that he had for it.”

Though the tragedy didn’t inform the design work and the animatic, as both had been completed by that point, Brooker says that his father’s passing did offer more personal insight into the power of what he, Roberts, and the rest of the crew at Six Point were creating for Black Noir’s character.

“My love of the medium and my excitement about the project helped me through the [grieving] process and helped me connect in a different way with the characters,” says Brooker. “That really is the story of Black Noir in the show and that's exactly why he ran to the abandoned pizza shop.”

He continues, “These are characters that are comforting him as he's going through that trauma and they’re helping him through it. I think that is very much the reality of the real world. Whether it's a teddy bear or a cartoon character that we love, or a superhero that we look up to, we look to those fictional characters to provide us with strength and comfort when things are difficult, in ways that people in our lives can't always provide.” But, when all is said and done, one can’t hide in the pizza joint – or what have you – of their childhood forever.

“It is funny because there's that line that Buster says in Episode 307 - ‘Bravery isn’t having no fear. Bravery is having fear, but you do it anyway,’” remembers Brooker. “It's when you face something, even when you're afraid, that's what bravery is. And that's something my father used to say to me, too.”

While The Boys has been renewed for a fourth season, there are no plans – yet – for Six Point Harness to return for further collaboration. But Brooker says he’s always willing.

“This project was a joy to work on,” he says. “I mean, 12-year-old me is freaking out right now. I had a great time collaborating with Eric and the whole team on The Boys. It was just a real pleasure. It was challenging because they set a high bar, but all of us at Six Point were up for that challenge and enjoyed it. Eric was really excited about this and that excited us. Hopefully, it comes through in the look and feel of the animation. Anytime Eric wants to collaborate with us, we're up for it, for sure.”

The Massive Creative Fellowship Behind ‘The Lord of the Rings: The Rings of Power’
‘The Dragon Prince’ Director Villads Spangsberg Talks Toonlines and Tough Challenges
Laurence Fishburne and Steve Loter Talk ‘Marvel’s Moon Girl and Devil Dinosaur’
Taking an Old-School VFX Approach in ‘All Quiet on the Western Front’
‘Natural Habitat Shorts’: Like ‘Ranger Rick,’ But for Adults
Framestore Sets Sail on ‘1899’ with New Virtual Production Tools
VFX is the ‘Thing’ for Tom Turnbull on Tim Burton’s ‘Wednesday’
We Need to Chat
END_OF_DOCUMENT_TOKEN_TO_BE_REPLACED