With production shutdown due to COVID-19, the hit NBC series finished its final Season 7 episode by integrating 20+ minutes of toon-shaded animation with live-action. 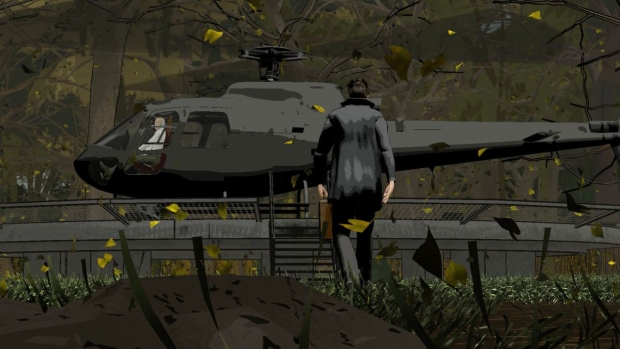 For seven seasons now, Raymond Reddington has been quite the animated character; as the central figure in NBC’s hit series, The Blacklist, the former military officer and current criminal mastermind / man of a thousand previously cached boxes of whatever might be needed for a future mission, has been one of TV’s most deliciously devious and wily sometimes good guy villains.

So, it was only fitting that when the COVID-19 pandemic shut down series production, trimming a 22-episode season down to 19, with only half a finale in the can, animating an animated character saved the show; live-action was blended with comic-book styled animation, a risky but innovative solution to an expensive, vexing dilemma. To get the uniquely stylized animation done with the proper look, in less than two months, the show’s producers turned to leading previs company Proof.

To accommodate the project, they first had to reinvent their workflow; unlike their previs, which is normally seen by only a handful of people in a production, their work would be showcased for the first time to millions of viewers. Using “The Blacklist” comic books as reference, Proof immediately went to work creating a pipeline to accommodate the custom, graphic-novel styled animation; artists at the studio’s London and Atlanta facilities worked feverishly to complete the show for the May 15th airdate. The project marks the first time Proof supplied final animation for a television series, though they’ve been producing high-end previs for film, TV, and digital media for almost two decades.

According to Patrice Avery, Proof’s global head of production, with COVID-19 ‘Work from Home’ rules coming into play mid-March, productions everywhere were shut down across the globe. “At that point, The Blacklist had shot around half the final episode for Season 7. [Show creator / executive producer / writer] Jon Bokenkamp and [showrunner / executive producer / writer] John Eisendrath contacted Proof to discuss the possibility of using animation for the remainder of the episode.”

Bokenkamp and Eisendrath wanted to explore the idea of using toon-shaded previs like Proof had done many times on past film projects such as Guardians of the Galaxy, Wrinkle in Time, and The Hunger Games. “The Johns [Bokenkamp and Eisendrath] wanted to see what might be possible [with toon-shaded animation],” Avery explains. “So, John E. contacted [Proof owner / president] Ron Frankel to see what Proof could do. With no idea on the scope of the work and knowing it would actually be aired, we had some concerns, as previsualization is primarily a planning tool for production, not something taken on as final for broadcast! With multiple productions going on hiatus for the shutdown, we decided it would be a great opportunity to see what we could do.” The showrunners came to Proof with a pretty clear design directive in mind. “On one of our client calls, Jon Bokenkamp talked about seeing it almost as a moving graphic novel,” Proof sequence supervisor Adam Coglan recalls. “I think as soon as he said that, both [Proof sequence supervisor] Matt Perrin and I understood the aesthetic that the guys were after, so we leaned into the dramatic angles and stylized framing. It also meant that we could convey the story and mood of a scene through lighting and framing and be quite economical with the animation.”

“The Blacklist has its own spin-off comic series, which provided us with great style reference early on,” Perrin adds. “We also discussed graphic novels and movies we wanted to reference; the rotoscope animation in Waking Life and A Scanner Darkly played a big part in helping us find our 'look.' We modified our existing previs toon-shader for the project to give a more sophisticated outline and painterly texture to the characters.”

As the team assessed the ambitious scope of work, Perrin’s first concern was the production’s extremely short timeframe. “We had very little time to familiarize ourselves with the show before we began designing the animated scenes from the ground-up,” he notes. “Add to this the fact that our teams were all working remotely for the first time, and it made for quite a daunting project.” To begin with, Proof had to create 20+ minutes of previs/pitchvis starting with script pages from all six acts of the episode. With over 40 characters and 20 sets, the Proof team had to build a considerable amount of content in an extremely short time. Quick enhancements to their toon-shader technology were also needed. “We needed to expand our existing toon-shader tools to feel more like a comic book with hatching and cross-hatching techniques,” Avery says. “The teams started with a rough blocking of the action and did daily deliveries and reviews with the Blacklist team to continue to plus the action, animation, and camera work. The initial scope didn’t include lip-sync, but in the final week, the UK supervisors were able to utilize a lip-sync tool that had been used on previs projects to add some basic lip movement to work with the dialogue. As scheduling and recording talent from home had its own challenges, the dialogue/recordings were changing up until the week of delivery.”

One of the project’s trickiest aspects was that with such a compressed timeframe, all the Proof teams had to work in parallel. “We couldn’t wait for asset builders to finish models of the actors before starting to animate, so for a long time, the clients had to get used to looking at generic proxy models instead of their main actors,” Coglan says. “But since we’re so strong with previs, we have a fairly flexible pipeline that can adapt on the fly to changes pretty well. So, we were set up to cope with the compressed timescale.”

“Another challenge was wrangling animators all working from home either over Zoom or WhatsApp,” he continues. “Wading my way through all the memes to find the relevant information was hard. Animators love their memes.” For Perrin, Proof’s standard previs workflow was ideal for this project. “Our teams are used to working fast to visualize shots and sequences for clients,” he says. “On this show we kept the initial design stage very simple, favoring a blockout animation and greyscale approach to renders. This allowed us to get scenes signed off very quickly with the clients and saved valuable time for the animation stage of production.”

“Our job was made so much easier by having such an open minded client, but I think one of  the biggest changes for us was establishing a common language with a client who doesn’t typically work in VFX or animation,” Coglan states. “Normally our first point of contact would be with a VFX supervisor and producer and then the director. The Blacklist guys were great at putting their trust in us and were fantastic listeners when we had ideas about framing and staging.”

Ultimately, Proof’s deft assembly of a team of 50 people working together remotely, across the globe, was worth the risk; the bold, innovative series finale was a critical success. Looking ahead, the project may serve as a template for future Proof efforts. “The success of our remote working setup on this show could mark a shift for future projects at our studio,” Avery concludes. “Our artists were able to work safely and securely from home with no real loss to productivity. It's great that something positive can come from such an otherwise strange situation.”