Christine Fellows uses cut-out collage and stop-motion to animate Suzie Ungerleider's new song about releasing the hold traumatic events have on our lives. 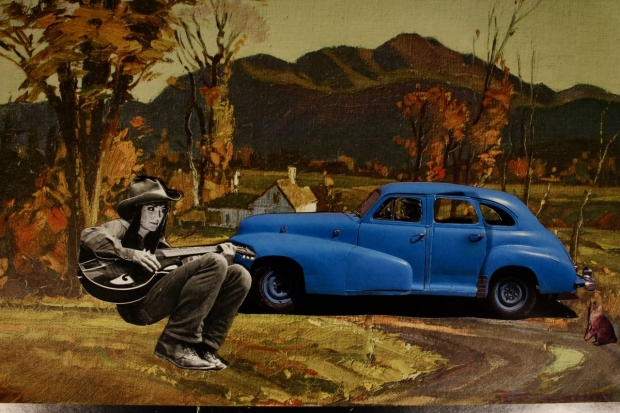 Recording artist Suzie Ungerleider has just shared with AWN a new animated music video for “Baby Blues,” the first single from her upcoming album, My Name is Suzie Ungerleider.  The two-time Canadian Juno Award nominee officially opens a new chapter in her distinguished career with the upcoming August 13 release of her album, the first since the artist formerly known as Oh Susanna announced that she would now record and perform under her birth name.

According to Ungerleider, “Baby Blues” is a song about “how the traumatic events we witness when we're young can haunt and indeed shape our older selves.” “Like ghosts,” she adds, “sometimes you just need to just sit with them, feel their power, and, because they feel seen, they release their hold on you for a little while.”

The short was created by artist Christine Fellows, working with images from vintage books she likes to collect. “I began the project by listening to Suzie’s song over and over while looking through books for country scenes and pictures of old cars,” she explains, choosing to produce the animation using cut-out collage and stop-motion, a technique she finds “labour intensive, but with a striking and effective result.”

Take a few minutes… and enjoy Ungerleider and Fellows’ look back at the past:

“Flipping through pages and pages of images with my X-Acto knife as I listened, the first image that revealed itself to me was the starry sky and the landscape, and everything else followed from there,” Fellows reveals. “To me, paper collage and stop-motion offer a unique way of connecting with songs, underlining elements of the rhythm and lyrics and dynamics, taking the song apart and putting it back together from a visual perspective.”

Working solo, Fellows spent one month prepping materials, shooting, and editing the piece. “I used a Canon DSLR camera, a Manfrotto Magic Arm, some lights and mirrors, and a whole bunch of paper collages I assembled and manipulate by hand,” she shares. “I use Dragonframe 4 software, which is wonderful and helps me to stay organized. And a tiny bit of Photoshop here and there.”

Fellows is a songwriter and composer/sound designer for film, not a filmmaker, and stop-motion is something she “fell into a bit by accident.” “Paper collage has a been a companion to my songwriting practice for many years,” she continues, “and I find it quite meditative. It allows me to think about composition and narrative in a different way than I do when I’m writing songs. I was collaborating with a choreographer a few years ago on a performance work, and she suggested I consider animating my collages for the project. It didn’t take long for me to get hooked on stop-motion.” “Suzie was very supportive,” Fellows notes about her creative decision-making on the project, “and gave me free rein, offering wonderfully insightful and thoughtful feedback throughout the process.”

The biggest challenge for Fellows was working by herself. “I really would have loved to have had an extra pair of hands and eyes,” she shares. “Actually, it would have been ideal to have had the opportunity to bring Suzie into my studio to collaborate with me on the project.”

With the video’s release, Fellows is looking forward to people’s embrace of Ungerleider’s new music. “First and foremost, I hope audiences hear Suzie’s incredible song,” she says. “For me, it was a gift to be able to spend time with the song, to interpret it visually.”