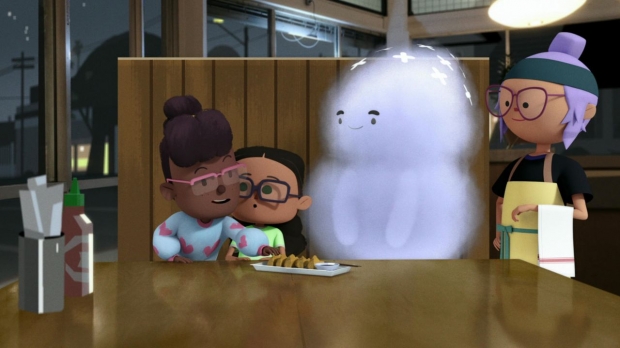 Creating a kid’s animated series centered around ghost encounters - inspired by real superstitions and stories - that are serene rather than scary, could prove tricky. Luckily, Elizabeth Ito, creator and showrunner on Netflix’s new documentary-style animated children’s show, City of Ghosts, had personal experience to draw from.

“When I was six, I saw the ghost of what we think was my great grandmother in the hallway of our home,” says Ito, a long-time Los Angeles local best known for directing the Primetime Emmy award-winning animated sci-fi series Adventure Time. “When I thought I saw this ghost, I yelled out to my dad, and he was like, ‘Go back to bed.’ The next morning, he said he thought he had seen a ghost too, earlier in the night, and just didn't want to come out of his bedroom.”

She adds, “It was a funny story, and I was thinking recently about how nice it was that my dad believed me and didn't tell me ghosts don't exist. It had a positive impression on me as a kid.”

Debuting on the streamer this past Friday, March 5, Ito’s City of Ghosts is a documentary-style animated series that follows the adventures of a group of young kids, known as the “Ghost Club,” as they investigate various ghost sightings and encounters throughout the city of Los Angeles. “It's really interesting how kids do tend to see ghosts, and they tell their parents about it in some weird way, and it’s usually the parents who gets creeped out,” Ito shares. “Similar to how pets can react before an earthquake, I think kids have this sense for certain things too.”

But despite the Ghostbusters-like plot, the six-episode series employs a calm, clever, and quietly comical tone where the Ghost Club members not only befriend the ghosts, but also interview them and listen to their life stories, learning more about the history of Los Angeles neighborhoods in the process.

The first episode begins with a skeptical new Japanese restaurant owner who doesn’t believe in ghosts and, on the off chance she’d entertain the thought, wants nothing to do with the hauntingly suspicious and slightly humorous activities going on in her kitchen, from missing hot sauce to a busted fryer. That is, until lead Ghost Club detective Zelda breaks down the owner’s stereotypes and introduces her to the shy, gyoza-loving ghost.

“We came at this show from the point of view that, ‘If you were a kid trying to figure this thing out, what things would you focus on?’” Ito explains. “When my son was really little, it was hard to find shows and programming for him where he wouldn't end up scared. I don't know whether it was just that my kids were extra sensitive, but we would try to find shows that were more soothing, like watching older Mr. Rogers videos with really smooth jazz music where they go to factories and learn how to make crayons. It was also a show I felt like I could watch with them and be interested in. So, we took a similar approach with City of Ghosts.” But being Asian American, and having lived in L.A. her whole life, Ito says her inspiration for the show also came from an eagerness to spotlight the city’s diverse communities - from Oaxacan people in Koreatown to the poets and musicians of Leimert Park - as well as the city’s rich history “before it started to be gentrified.”

“Like everywhere else, a lot of our older neighborhoods are going through these shifts where property values are going up and new businesses are moving in,” says Ito. “That sometimes erases the history and legacy that used to be there. It's a shame if people don't know about that history before this happens to their neighborhood.”

That history and diversity are not only narrated through the ghosts of L.A.’s past, but also illustrated through the show’s mix of 2D and 3D animation layered on top of real photos of the city. “We basically did paintings on top of pictures,” Ito notes. “We wanted to capture visually the kind of variety of people and places that you would have in a place like L.A., with differently styled background crowds and settings.”

While most of the show’s main characters - the members of the Ghost Club and their clients - are created with a soft, cylindrical 3D animation style, many of the show’s background characters and scenery are 2D formatted in sharper, geometric shapes. The City of Ghosts world, as a whole, is incredibly colorful, with the aesthetic of a pop-up book. Each tree, pedestrian, and car like a snowflake -- none created or painted the same. The series also uses animated wood blocks to tell the ghosts’ stories of their days growing up in old L.A. neighborhoods.

“Animation has a much broader palette than I think we've typically expected from it,” says Ito, also known for her work on Astro Boy, Cloudy with a Chance of Meatballs and Phinneas and Ferb. “When somebody's saying they're making an animated movie, or an animated show, there's more possibilities than just the products that you're used to.” Ito pushes the envelope of animation further with the documentary style that feels just as raw, hand-made, and organic. “I wanted it to feel like this could be a real documentary made by kids,” she says. “I get a real kick out of things that amateur filmmakers make, like Huell Houser from PBS. There's something really fun about the entire production of it and the relationship Houser has with his cameraman that comes out on screen.”

She continues, “That’s where the idea came from to have Zelda not only have this Ghost Club, but also have her brother being creatively connected, making this documentary about his little sister. We’d ask ourselves, ‘Would a kid film it this way? Would they be there for this moment?’ It provided this really exciting, jumping off point for a lot of different, new things to try on the show.”

The character voice acting, performed by everyday residents of L.A., further enhances the show’s natural feel; some characters take on the real names and professions of the people behind their voices.

“A lot of what our characters say is just true to themselves and their own lives,” says Ito. “In the Leimert Park episode, there’s a part where the drummer ghost has this moment between him and our Ghost Club member character Eva where she's writing a poem and, during a recording session, at a part that wasn’t supposed to be recorded, he looked at a notepad and said jokingly, ‘I'm an expert at reading rapper chicken scratches, let me see that.’ But we recorded it and I was like, ‘We have to use that.’ By gently introducing viewers to different cultures, history, and gender fluidity through young Ghost Club member Thomas, Ito says the show has been an education for her as well. “Making this series has made me view LA a lot differently and, in a small way, it’s made my personal community so much bigger,” she says. “Most of the people who have voiced characters on this show, I now consider to be my friends. There's a nervousness that comes with ‘How do I step into a new community and learn about these people without being that awkward person?’ This show has personally made that less of a barrier for me, and I hope it does that for others as well.”

Ito’s City of Ghosts is now streaming on Netflix.

The Massive Creative Fellowship Behind ‘The Lord of the Rings: The Rings of Power’
‘The Dragon Prince’ Director Villads Spangsberg Talks Toonlines and Tough Challenges
Laurence Fishburne and Steve Loter Talk ‘Marvel’s Moon Girl and Devil Dinosaur’
Taking an Old-School VFX Approach in ‘All Quiet on the Western Front’
‘Natural Habitat Shorts’: Like ‘Ranger Rick,’ But for Adults
Framestore Sets Sail on ‘1899’ with New Virtual Production Tools
VFX is the ‘Thing’ for Tom Turnbull on Tim Burton’s ‘Wednesday’
We Need to Chat
END_OF_DOCUMENT_TOKEN_TO_BE_REPLACED