For the Six Point Harness creative director, producing hundreds of animated segments for Michelle Obama and Netflix’s new live-action series meant bringing a fun, colorful, and meaningful world of food and nutrition to kids and families. 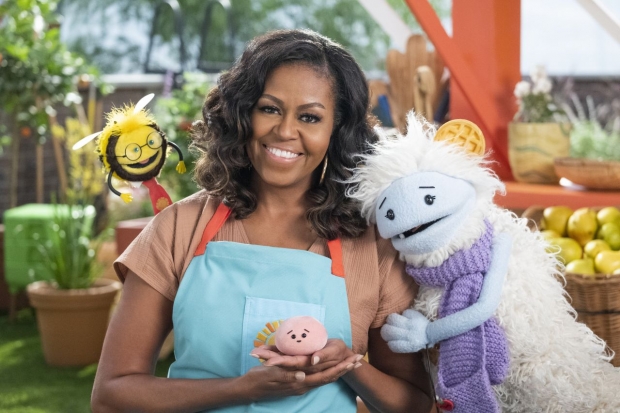 A team of about 30 animators and artists at the studio worked with Higher Ground Productions to produce hundreds of animated shots, enhancements, and segments for the series, which features Michelle Obama as a grocery store owner who helps puppets Waffles and Mochi learn about the wide and wondrous world of food and nutrition.

For Six Point Harness creative director Musa Brooker, who directed the animation, the series was an unprecedented opportunity, both personally and for the studio. “Working on this series was amazing - an honor and a pleasure!” he shares. “It's so wonderful to be part of a project that's caring, careful, thoughtful, and fun! Healthy diet and nutrition, especially for younger people, is obviously an important subject and one that is particularly meaningful and special for Mrs. Obama - children's health is one of her signature issues. So, it's been a thrill to play a role in this project that addresses the subject in a fun, enlightening, and entertaining way.” “As an African American, it's of course extra-gratifying that the project comes from a company founded by President and Mrs. Obama, who have such meaningful positions in the history of the nation, but also occupy a particularly consequential place within the Black community,” he continues. “My participation in the project and, of course, all of the work for the series, was approved by the Obamas, and that's pretty cool.”

Six Point Harness’s work on the series includes partially animating the main character Mochi, as well as enhancing many of the colorful scenes – shot on location around the globe – with eye-catching animated designs. Additionally, Waffles + Mochi features standalone animated segments that help enhance and amplify the discoveries made each episode by the characters and a lineup of guest stars.

“To capture the different flavors of the places Waffles and Mochi visit, Higher Ground wanted us to capture different flavors of animation,” says Brooker. “The varied styles of animation viewers will see in the show reflect the varied styles of food and nutrition found around the world, and it’s been a great joy to work on a project designed to broaden both the minds and palates of young viewers.”

Animated segments include the “Taste Buds,” who live at “Taste Bud Towers” inside Mochi’s mouth – which is also animated; throughout the series, the studio employed a wide variety of animation styles and techniques, including stop-motion and 2D, all overseen by Brooker. Brooker also worked closely with the Waffles + Mochi’s producers and writers, including series creators Erika Thormahlen and Jeremy Konner, to develop the visual styles, animated imagery, and food-related characters seen in the series.

“From start to finish, it took just about a year, maybe a little less, to complete the work,” Brooker says. “I started on the project at the tail end of the writers' room and worked directly with the writers, producers, and show creators Erika Thormahlen and Jeremy Konner, to develop some of the concepts, look and feel of the animation.  We had a wonderful group of artists and crew members at Six Point Harness that worked to flesh out and realize the artwork and animation.”

Creative collaboration across studios and teams on a project like Waffles + Mochi is always challenging, so Brooker spent considerable time exploring and developing the show’s various animated segments with the many writers, producers, and artists on the show.

However, for Brooker, an even bigger challenge was overseeing the varied animation production itself. “The biggest challenge for me was developing and managing the different styles and techniques of animation that are used throughout the show,” he explains. “I don't think I had, until this point in my career, worked on a project that contained so many different styles of animation over such a long period of time or with as long a total run time.  There were some recurring animated segments and styles but there is a wide variety within the show - so keeping those styles consistent, unique, and complementary to one another on this scale was a challenge, though a fun one.”

The project meant a return to 2D for Brooker after having spent years working in stop-motion. “A particularly personal challenge was that I've spent the bulk of my career in the field of stop-motion animation,” he notes. “2D or drawn animation was my first love though, so it was wonderful to return to that side of the medium though it had been a little while.  At the same time, it was gratifying to find ways to fit in a little stop-motion as well.” Once the pandemic hit early last year, Six Point Harness quickly shifted to a safe, remote production pipeline like so many other studios. “It was a bit of a challenge to not be in the same space as some of the artists we were working with,” Brooker acknowledges. “We’ve been working almost entirely remotely for just about a year now.  But our great crew is so resilient that we didn't really miss a beat once we began working from home. And as a studio we've worked hard to maintain that sense of community and collaboration even at a physical distance.”

“So, while there were certainly some challenges, we tackled them in a thoughtful and creative way, and helped play our part in creating this unique, engaging, and delightful show,” he concludes. “For me one of the magical properties of animation as an artform is its diversity, so it was wonderful to be able to explore that diversity of style all within the boundaries of a single project.”

Take a moment to read about Brooker and Six Point Harness’s work on a 60-second animated music video for “Vote,” an original song written and recorded for last year’s Black-ish two-part election special by R&B artist Jhené Aiko. The special was directed by Oscar-winning Hair Love director Matthew A. Cherry; the music video, directed by Brooker, channels influences like UPA cartoons from the Golden Age, the video for Childish Gambino’s “Feels Like Summer,” and Post Malone and Swae Lee’s “Sunflower” video from Spider-Man: Into the Spider-Verse