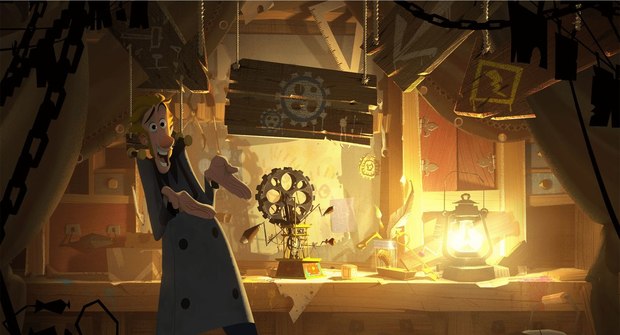 Director Sergio Pablos’ heartwarming animated Christmas film, Klaus, tells the story of a bumbling postman named Jesper (Jason Schwartzman) stationed in the fictional town of Smeerensburg on a frozen island high above the Arctic Circle, where the locals have been feuding for years. He befriends a teacher named Alva (Rashida Jones) and Klaus (J.K. Simmons), a mysterious carpenter who lives alone in a cabin full of handmade toys. Together, they manage to bring the Christmas spirit back to the town.

Pablos, a co-creator of Despicable Me (2010), is also known for his work on The Hunchback of Notre Dame (1996), Hercules (1997), Tarzan (1999), Treasure Planet (2002) and Rio, (2011). Klaus has been a labor of love for the director for many years, and the film has already received seven Annie Award nominations, including one for the film’s two production designers, Szymon Biernacki and Marcin Jakubowski.

The two came on very early in the film’s development, helping illustrate the original pitch book and develop production tools that would deliver the film’s unique aesthetic in a proof of concept. Jakubowski started on the film more than seven years ago; Biernacki came on board over five years ago. The film, shopped around to various studios, was perceived as "too risky," until Netflix acquired the rights in November 2017. Part of the perceived risk was Pablos’ plan to produce the film using traditional 2D animation; since arriving in the 1990s, CG-animated features have become the big studio norm, routinely breaking box office records while pushing 2D / hand-drawn animated features into the “lost art” category.

Pablos, determined to produce in 2D, nevertheless was also determined to update the look of traditional animation using more modern visual design technology. The director asked himself, “In a world where CGI hadn’t been invented, where would traditionally-animated films be today?” The search was on to find ways to move past the limitations of a classical animation style where, in essence, a flat cel is placed on top of a full rendered background. The search was on for ways to develop tools where characters could be lit in ways that gave them as much volume and texture as their surroundings.

For the production designers, their key challenge was finding a way to combine traditional hand-drawn animation with CG lighting techniques, like volumetric lighting and texturing, to give it a more 3D-like look and a unique style. No small task.

“We both started developing some images at the very beginning, even before starting to develop the lighting tool,” Biernacki explained. “And then at some point, Marcin said that he had an idea of how the lighting could be done, so he kind of disappeared for a while to work on that while I kept developing the language for the environment, the general look of the movie. So, we kind of split a little and Marcin focused on the lighting [tool], while I focused on the environment and then it all came back together when we actually started producing the proof of concept.” Jakubowski, who came from a computer science background, shared that it was a matter of tackling a big problem by breaking it down into smaller, more manageable pieces. “I started imagining the software and how the artist would work with it,” he noted. “[In pure CG] if I don't like the shape of the light and I have this model, I cannot do anything with the light because it's simulated. You cannot bend rays, so you'll have to adjust the model. I started imagining… what kind of tools you would need to do [what we wanted] in 2D and it was super complicated. There's no way to make it simple. We couldn't do it by hand because you would have to do it frame by frame. But with computers you can interpolate the key light.”

The result is a proprietary system, based on a compositing platform that lets the artists break down the process into different layers of lighting passes. “I found the most flexible software available… so I could basically force it to my logic and tweak it,” Jakubowski added. Working with Anaël Seghezzi, head of technology at Les Films du Poisson Rouge in France, they expanded upon the studio’s Houdoo software, along with other proprietary technology, to enable a new way to provide textures for characters.

According to Jakubowski, “I think an interesting way to put it, is that, there have been a lot of attempts to make 3D look like 2D. And it kind of feels like they're [saying] ‘Okay, how do we do it in 3D so then we can apply this and that, [but] it still ends up looking like 2D at the end?’ And what Marcin did is he thought, ‘Hey, is there a shorter way?’ Can we actually just have layers like you paint in Photoshop and move them around, and then apply the exact same logic you apply when you paint in Photoshop, but just be able to interpolate those layers and kind of move them? So in a nutshell, that was the thinking. Is there a way to just be much more direct with it? Can we move Photoshop layers in a sense, and animate them?” By splitting the lighting into component layers, such as direct light and shadow, ambient light, rim light and bounce light, the artist gained precise control of each component to blend the character into the environment. No longer did characters look like they were stuck onto a beautiful painting. With a solid proof of concept in place, when Netflix came on board, the production designers faced a whole new set of challenges, in particular, scaling up to manage a large team of artists.

“I think one challenge that’s completely not art related is just the fact that for both of us, it was the first time we were working in this position,” Biernacki said. “I was used to being a freelancer working from home. You give me a task, and I'm pretty self-sufficient. And then suddenly you find yourself working with 200 people and a lot of them need positive reinforcement. There are different characters, different personalities and if you don't keep them happy, they won't work.”

“So, for me, that was the biggest challenge… to actually understand, ‘Okay, I really have to devote a lot of attention to people now instead of just producing art,’” he noted.

Jakubowski agreed, adding he’s a bit of an introvert himself. So, he had to be more careful with what he said. Where before he might just offer casual advice, suddenly, when he said something, it really mattered, and dutiful employees interpreted it as new marching orders.

“And sometimes, I might just say something, and I don't realize the impact that it creates, and the weight of that responsibility,” he elaborated. “It's tough for me. I don't like this feeling but I'm learning to deal with that. I'm learning to just be focused and then be specific.” Exacerbating the management and communication challenges was the fact that the artists had to learn to work with a unique proprietary tool in an unconventional workflow. “We were working with 3D artists and they struggled to pick up our style because they had to unlearn what they knew,” Jakubowski stated.

“To have a whole department of people working on a brand-new tool that is going to follow this breakdown, this pipeline and this idea, and not go crazy, was a challenge,” Biernacki described. “It had to be simple enough for people to learn the software and the ideas behind it, like why we simplified the light, how we work with lights, how we work with shapes. Fortunately, the tool that we created is amazing.”

Overall, the two production designers shared all their duties evenly and always worked together on major aspects like reviewing lighting, compositing, backgrounds and layout. “We tried to work as much as possible together,” Biernacki explains. “It's not like we divided the production so that he takes care only of this and I take care only of that.” Jakubowski chimed in that that would have been too risky, in case one of them was unavailable. They each had to know the direction things were going and the decisions that had been made.

“Also,” Biernacki concluded, “I think we were much more comfortable sharing the responsibility and giving each other feedback, since this is the first movie for either of us in that role.”