As the first major animation studio to successfully produce cartoons exclusively for television, Hanna-Barbera Productions, founded in 1957 by Tom and Jerry creators William Hanna and Joseph Barbera, became famous for their wacky but lovable characters; from The Huckelberry Hound Show and Cattanooga Cats to Yogi's Gang and Jabberjaw, it’s been 30 years since many of the characters from the studio’s extensive series library have been seen on TV. 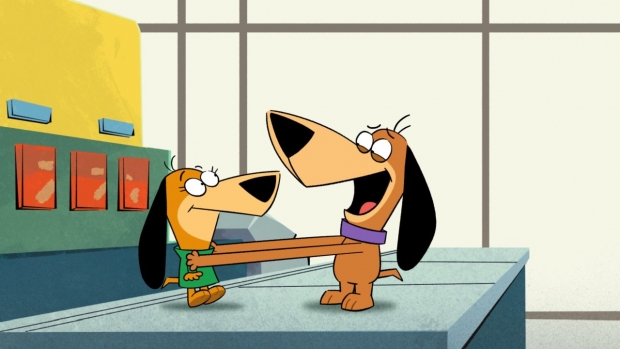 C. H. Greenblatt, known for his work on SpongeBob SquarePants and Chowder, has created a new animated comedy series Jellystone, featuring dozens of Hanna-Barbera characters now living and working together in the same town. Huckleberry Hound is the town’s mayor, Cindy, Boo Boo and Yogi are the town’s medical staff, and Jabberjaw works at a clothing store, just to name a few.

“It's a very silly, wacky, cartoony show,” says Greenblatt. “It can get pretty weird, but we had fun and if people like Chowder, they're going to like this.”

See exactly what he means:

Produced by Warner Bros. Animation, Jellystone is a 2D animated series that follows the misadventures of seven main character groups “with their own mini sitcoms,” as described by Greenblatt. “You got Yogi, Cindy, and Boo Boo. You've got Top Cat and his gang. You've got Huckleberry Hound. You've got El Kabong. You've got Jabberjaw with Loopy de Loop and Magilla Gorilla. You’ve got Augie Doggie and Doggie Daddy and the occasional Captain Caveman story here and there.” From the beginning, Greenblatt says his goal with Jellystone was to revitalize not only Hanna-Barbera’s famous characters, but also characters that are lesser-known, even to him.

“I grew up watching a lot of these cartoons in the 70s and 80s,” says Greenblatt. “A lot of my Hanna-Barbera was Wacky Races, Laugh Olympics, Grape Ape, and Captain Caveman. The education I experienced working on this series was finding the recesses of Hanna-Barbera that we don't know as much about. Everybody knows Snagglepuss, everybody knows Top Cat, but who remembers Glump from Valley of the Dinosaurs?”

He adds, “For this series, we needed to have the strongest Hanna-Barbera characters as anchors, and those are the ones you've seen in past ensemble cartoons like the Laugh Olympics and Yogi's Gang. But we also really wanted to pull some weirdos that are fringe Hanna-Barbera characters and either use them just as a sprinkling in the background, elevate them as little cameos, or maybe even have them become something more if they rise to the occasion.”

Originally, Greenblatt was hired on by Warner Bros. to make a handful of individual shorts to revisit Hanna-Barbera characters that had been on the shelf for a long time. But the more he worked on the projects, the more Greenblatt came to the conclusion that it would be more fun to combine all these characters into one universe together. “And then this town sort of came about, and I remember having this funny idea of, ‘What if Yogi was a doctor? Then Huckleberry’s the mayor?’ and suddenly it clicked,” he recalls. “The executives at Warner Bros. have been trying for a long time to revive these characters, but it’s been a tough nut to crack. I'm one person in a long line who’s attempted to do that, and I don't know why this version stuck. I think, possibly, it might just be because I wasn’t looking to recreate a feeling of nostalgia. I was just going to make a fun show that I liked.”

He adds, “The Warner Bros. executives basically handed me all the toys, this wonderful library of characters, and said, ‘They're just sitting there, do whatever you like. Make them fun again.’”

And instead of approaching his series by re-creating a world, with character designs long-time fans were familiar with, Greenblatt created a show that gave these characters new life, and sometimes new genders.

“There were practically no female characters in the old Hanna-Barbera universe,” says Greenblatt, who, in Jellystone, made characters like Jabberjaw, Augie Doggie, and Squiddly Diddly female. “So, when I started developing Jellystone, I was like, ‘I need to balance this out and get some really funny girls on the show.’ I know to some people it's controversial. Not everybody's going to like it. But I had to make the conscious decision at the very beginning that I wasn't going to be beholden to the past because that limits the freedom to make creative choices.”

This no holds barred approach also influenced Jellsytone’s set and character design, which Greenblatt says was the biggest challenge of the production. “We had to design an entire city, where people live, where they work, and then suddenly you realize, ‘Oh my god, there are so many characters to design up front,’” he shares. “And the old style, as much as it's awesome, it's very stiff, re-used drawings. It was all about making a cartoon with as few drawings and as few resources as possible. They weren't always designed for comedy. They were sort of designed for this iconic look.” That “iconic look” also differed across different Hanna-Barbera characters, and Greenblatt wanted a “unified style” that would make viewers believe a disparate world of dozens of cartoons belonged together in Jellystone.

“I wanted them to be squishy, emotive, and cartoony,” says Greenblatt, whose biggest concern was animating the characters in a way that pushed the comedy. “One thing I referenced was [the game] Disney Infinity, where they had to create this chunky style so that people from Star Wars would work with people from Tangled. It was the same theory we used in Jellystone, creating an animated language across all these characters so we could put the Cattanooga Cats next to Moby Dick, next to Shazzan, next to Yogi.”

Despite the hurdles of having to sort through hundreds of classic cartoons, select the featured cast, and find a way to unify them in a completely new animated world, Greenblatt says getting to revisit and revive all these characters has made him feel “like a kid in a candy store.” “The benefit I had, production-wise, was bringing in my board artists and directors as writers on the show,” he notes. “We spent a couple months at the beginning, before we started boarding, just sitting in a room, watching old cartoons, working out the world, characters, and stories. And each board artist really took to certain characters, which was fun to watch. I really like getting to set up the playground and then let people play with it.”

And though nostalgia was sometimes sacrificed for the sake of comedy, Greenblatt hopes the show pays loving homage to the iconic cartoons that have earned their place in animation history. “This show could get people to check the original stuff out and give even more value to those old cartoons,” says Greenblatt. “That’s the hope at least.”