How Choreography and Color Helped Shape the Vibrant Characters of ‘Encanto’

For Renato do Anjos, Kira Lehtomaki, and Lorelay Bové, early attention to culturally authentic details in design and movement made for a unique, magically expressive family, and house, in Disney’s enchanting, animated musical, coming to theaters Wednesday, November 24. 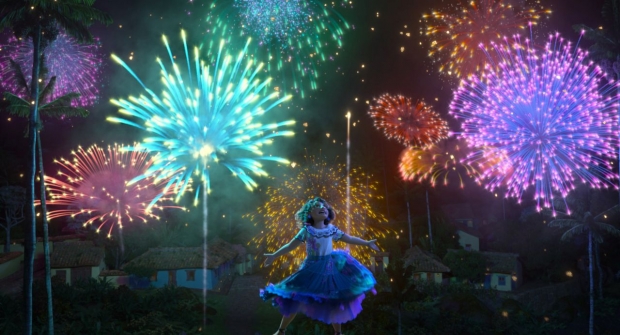 Despite having worked on massive Disney projects for many years, from Big Hero Six to Frozen, Tangled, and Moana, for both Renato dos Anjos and Kira Lehtomaki, Encanto was still “the hardest film we have ever worked on.”

And it wasn’t just due to them weathering a pandemic that hit midway through a four-year production.

“It’s due to the complexity,” explains Lehtomaki, one of Encanto’s heads of animation alongside dos Anjos. “Having 12 main characters, all heavily featured within the film, who we had to find and do character exploration for, that was a larger task than [what we’ve faced on] some of the movies we've worked on in the past. Even ones with large casts, ultimately it still boils down to two or three main characters that you're focusing on. This time, it was much bigger.”

Encanto, directed by Moana’s Jared Bush and Tangled’s Byron Howard, as well as co-directed by Raya and the Last Dragon’s Charise Castro Smith, takes viewers through the enchanting mountains of Colombia, into a magical house, where all the members of a unique family have been blessed with special gifts, from super strength to healing. Well, all except for one family member: Mirabel.

The young girl is determined to prove her value as the only “ordinary member” in the Madrigals family; she seizes an opportunity after learning the magic surrounding their Encanto - the magical place where her family lives, and which grants them their powers - is in danger. The new Disney musical adventure releases into theaters this Wednesday, November 24.

“I think, ironically, the biggest challenge of all these characters was actually Mirabel,” notes Lehtomaki. “You would think that given we've done multiple Disney heroines before, she wouldn’t be so hard. But, early on, the directors really put forth that Mirabel had to be different, and we couldn’t commandeer any animation seen on any other character and have it work on her.”

She adds, “And there was a subtlety and balance that we had to find within her character; he story is that she’s a very capable girl, yet imperfect in her movement. But we didn't want ‘imperfect’ to be translated as her just being clumsy.” With a variety of complex characters to work with – the film’s leading lady the most troublesome - and with those characters’ stories and personalities often conveyed through song and dance numbers, Lehtomaki and dos Anjos knew things had to be done a little differently, starting with the early involvement of animation reference choreographer Jamal Sims and animation reference consultant Kai Martinez.

“These animated feature films are a team sport,” says Anjos. “It's a lot of collaboration, especially when you're conceiving these characters. Kira and I, we started together on Bolt and we've worked on pretty much every project together ever since. We’ve worked with Byron on Bolt and Tangled, and Jared on Zootopia. But, nevertheless, this would be a challenge.”

Lehtomaki adds, “Musicals are some of the hardest things to animate. And we have worked with choreographers in the past and it's been awesome. But, on this movie, we wanted to dive even further by bringing the choreographer in earlier in the process. And we got to do that with Jamal and Kai.”

Lin-Manuel Miranda (Hamilton, Moana), who wrote the film’s original songs, had already been working closely with the directors on lyrics, and what emotions and feelings they wanted expressed in each number. Miranda would record the demos, and then Lehtomaki and dos Anjos would have Sims look at the first storyboard pass.

Normally, Lehtomaki notes, many of the storyboard details are worked out ahead of choreography, but they wanted more input from the dancers and consultants to help breathe more life onto the screen. “We'd show him the story reel and discuss who we wanted each of the characters to be,” she says. “We hadn't even seen many of them in the film yet, so we had some turntables, rudimentary walk cycles, and early animation tests. Then Sims could work with Kai and the rest of the dancers to come up with movements that felt appropriate for the characters and musical moments. They were helping to develop who these characters were.”

Martinez was also heavily plugged into the animation department - almost as much as Lehtomaki and dos Anjos - giving notes on the pace and motion of the film’s traditional Columbian dances. “It was a great new collaborative process that we haven't quite done in that way before,” Lehtomaki shares. But in addition to Mirabel and her family, another starring character posed quite challenging for the team: the Madrigals’ house. It wasn’t just an environment where the songs and dances took place, it was a character in and of itself. And this is where Lorelay Bové, Encanto’s associate production designer, knew that the film’s colors needed to express just as much as the dancing and sing just as loudly as the music.

The floors, the drawers, the stairs, and ceiling tiles of the Madrigals’ home all come to life, dancing with the family as characters move about the house. “The house was one thing that was also really hard for the team to crack,” says Bové, who partnered with the film’s production designer Ian Gooding. “It had a lot of moving pieces. It had to emote, it had to hold together this family, it had to move objects, and also it had to be influenced by a Colombian home.”

In addition to referencing numerous musicals and photos from Columbia, Bové also played with different color pallets from character costumes, giving each room of the large, magical house its own textile, home-made look and expression. She also made sure its aesthetic supported the characters that live inside. “We wanted this house to represent them,” she says. “So, I was able to tag different colors on each section of the house based on each character. But it also had to feel right for the moment and the song. Like for Bruno, Mirabel’s uncle, he has a green color palette, and there’s green throughout his whole song.” But designing these elaborate scenes wasn’t as simple as emphasizing a character’s color pallet. It was using that color palette to give the Madrigal’s house the tools to make an audience feel the same level of emotion those characters are also feeling, with the house’s rooms almost serving as an incubator for character development.

“When I looked at musicals for inspiration for that song, I looked at Tim Burton’s Beetlejuice,” explains Bové, who couldn’t have picked a more suitable reference in regards to a house come alive in response to the characters that inhabit it.

She adds, “And the color is not just random. If you think of Abuela Alma, the matriarch, the grandmother of the family, we picked magenta tones for her because she had lost her Abuelo in a Columbian river that has magenta algae. Julieta, the mother, is very peaceful and a healer, so we gave her turquoise, because it's a healing color.” Once again the odd one out, Mirabel doesn’t have one specific color connecting her to the house. However, the home is filled with visual imperfections meant to reflect the authenticity and real human struggle Mirabel faces with discovering her own identity. And, just like the house shares many colors, none its own, Mirabel’s costume contains almost all the colors of her family.

It’s no wonder both the house, and Mirabel, were Encanto’s most challenging characters; they’re so much alike, almost reflections of each other.

“One thing that I love about Disney, that we focus on in all these movies, is attention to detail, and authenticity,” notes Bové. “If you look at Frozen, everything's just perfect because it's taken from Elsa’s snowflakes. In Encanto, imperfection is a theme in the movie. If you look at Mirabel not being the perfect one, just being like all of us, and how the house has a tactile, very handmade kind of feel, it makes sense.”

And while Encanto is a very busy and exciting film, both visually and musically, the most challenging Disney animated film many of the artists have every worked on, Lehtomaki says everyone’s effort has been what’s made the movie as special as it is.

“There are a lot of things at play here; many people bringing their expertise to the production,” says Lehtomaki. “And it’s complicated, given music and a beat that you have to work with, have to put acting on top of, have to get the dance technicality correct, and have to get the lip sync and animation right. But, within all of those constraints we find specificity, and that specificity opens the doors to us really tuning in and focusing on all the subtleties and specifics of the animation. And I think we do some of our best work with those constraints.”

‘Natural Habitat Shorts’: Like ‘Ranger Rick,’ But for Adults
Framestore Sets Sail on ‘1899’ with New Virtual Production Tools
Animated Characters: The Art of Babbitt – Part 1
Bruce Smith and Ralph Farquhar Talk ‘The Proud Family: Louder and Prouder’ Season 2
VFX is the ‘Thing’ for Tom Turnbull on Tim Burton’s ‘Wednesday’
We Need to Chat
Choc Chip Animation Riffs on Pop Culture in ‘The Art of Murder’
F is for Flake: The (Not So) Great Animation Robbery?
END_OF_DOCUMENT_TOKEN_TO_BE_REPLACED