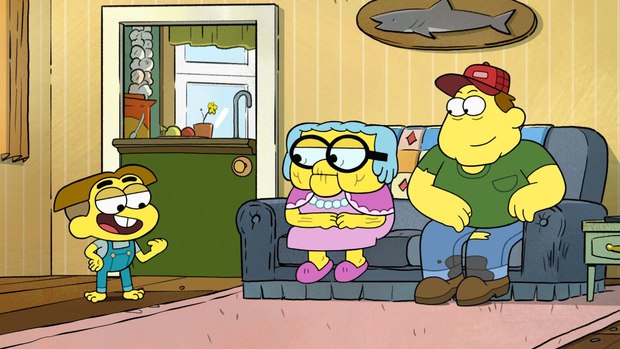 Season 2 of Disney’s animated comedy adventure series Big City Greens premiered on the Disney Channel and DisneyNow this past Saturday, November 16, with new episodes airing every Saturday night. The series, created and executive produced by brothers Chris and Shane Houghton, follows mischievous and optimistic 10-year-old Cricket Green, who moves from the country to the big city with his wildly out of place family—older sister Tilly, father Bill and Gramma Alice. Cricket’s natural curiosity and enthusiasm lead him and his family on epic journeys and into the hearts of his new neighbors. The series was heavily influenced by the Houghton brother’s childhood growing up in St. Johns, Michigan, a small rural town north of Lansing also known as the mint capital of the world. Cricket is based on and voiced by Chris, and many of the characters are inspired by real-life family members and childhood townsfolk

"Big City Greens is a sitcom about a country family moving to a big city,” Shane describes. “The Green family is a bit dysfunctional and together they get into all sorts of trouble. But, at the end of the day, they’ve got each other.”

The duo is best known for creating, writing and illustrating their comic book series, Reed Gunther, about a bear riding cowboy, which was published by Image Comics. After moving to Los Angeles, they went on to write and illustrate comics for The Simpsons, Adventure Time, and Peanuts. Chris worked as a storyboard artist for Disney's Gravity Falls and Wander Over Yonder, and Shane as an editor for reality series Tattoo School. A few years later, the brothers reunited to work on Harvey Beaks – Chris as a storyboard director and Shane as a staff writer.

The brothers are hands on in creating and guiding each episode of Big City Greens throughout the production pipeline. “When developing a story, we try to land on a reason for that episode to exist,” Shane shared. “And that reason is usually some sort of outlook on life. We often spend time exploring different perspectives on a subject. Once we have a nugget of an idea, we have a list of questions a story has to answer before it will become an episode.”

In order to push forward and develop their “nugget of an idea,” the brothers examine a set of basic story building questions: whose story is being told and what is the story’s prospective; what is the character’s internal and external motivation or “need;” what is at stake and what is the story all about?; is the idea specific to the series, and probably most important, is it fun to watch? “If we can answer these questions for a story idea, then that’ll become an episode,” Shane explains. “Sometimes we’ll have ideas that make for great scenes, b-stories or even just gags, but they can’t hold up the full weight of a story, and those ideas are saved to be incorporated into a story that can handle the weight. We spend lots of time with our very talented writers to brainstorm and structure episodes based on our childhoods or real-life experiences. Grounding an idea with an emotional truth usually leads to some of our strongest episodes.”

“We can talk about the thrilling subject of ‘Animation Pipelines’ for days,” Chris adds. “The basics are that we brainstorm ideas with the staff writers, write an outline and hand out the outline to the board artists. The board artists then write the dialogue and board the episode. The director brings the boards into editorial and creates an animatic and cuts it down to time, then the episode goes to design where backgrounds, character designs, props and effects are all generated. The animation is timed by the timing directors and the production team gathers everything and ships it overseas. We’re along for the whole ride guiding each episode through the process”

The animation is produced overseas with two Korean animation studios: Rough Draft Korea and Sugarcube. The team alternates submitting half-hour episodes to either studio. “We have a top-notch production team that coordinates sending the overseas studios everything they need, and answer any questions that come up,” Shane says. “Effective communication is key.”

“At the end of the day, there’s no magic button that you can press to make a cartoon,” Chris notes. “Every tiny detail and movement is a decision that needs to be made and planned out. Animation is simultaneously a wonderful and horrible process.” The show’s success and rapid production growth has proven challenging. Changes made for Season 2, as well as a growing platform of related projects, is the result, as Chris states “… of the world of Big City Greens growing beyond the TV series.”

“Our audience really likes the show and because of that, there’s demand for shorts, YouTube content, DisneyNOW mobile games, etc.,” he continues. “That’s very exciting but it presents a new set of challenges as showrunners. The quality of the TV series needs to stay great or else there’s no point in trying to do these other offshoots. And the more episodes we write (we’ve written over 100!) the more we’re challenged to ‘top’ what we’ve already done.”

With Season 2, the team has branched out and experimented with different forms of animation. The holiday special includes some stop-motion animation while paying tribute to animated holiday classics. The second season is about pushing the envelope, being even more funny, trying new things without holding back. “We had some weird ideas for episodes that we wanted to do in Season 1 but held back because we needed to spend time establishing the characters and their relationships to each other,” Shane says. “Once we felt like the core of the show was firmly established, we wanted to push the boundaries of ridiculous story ideas in Season 2.” “Season 2 features stories like Cricket discovering he has a conscience represented as a little angel and devil, Gramma pretending to be a ‘Swamp Witch,’ Remy spending a million dollars to hang with his favorite YouTube influencer, Bill’s truck being strapped to a rocket and headed to Mars, and Tilly dreaming of having her own talk show, which ends up looking like a blend between Mister Rogers' Neighborhood and Pee-Wee’s Playhouse,” Shane continues. “Season 2 also features Cricket going feral, the Greens in CG, Gramma exploring Egyptian pyramids and literal talking farm animals. It’s so much fun and we are thrilled for folks to start watching.”

Throughout the show’s growth and development, the brothers have been committed to its continued authenticity. The show is funny but relatable – the Green family reflects blue-collar multi-generational families dealing with life’s most basic problems and just trying to get by.

“Big City Greens is for anyone who’s ever felt out of place,” Chris shares. “It’s a show about feeling like an underdog, being a fish out of water and what it truly means to be a family. Also, we try to be funny. It was a goal of ours to show a family on Disney Channel that doesn’t live in a mansion or have magical parents. And that relatability has been received in ways we could’ve never imagined.”

“We’ve heard from foster kids that they really appreciate Cricket facing his new environment with such confidence since they find themselves in similar situations,” he concludes. “Cricket and Tilly’s parents are divorced, and their mom spent some time in jail. We’ve heard from kids with parents in jail and they’re happy to see their lives portrayed on TV. We’re really humbled by these types of reactions, but it speaks to the show standing out in surprising ways.”