Premiering today, the latest Lord and Miller show began life as an MTV presentation creator Ben Hoffman knew no one would ever make. 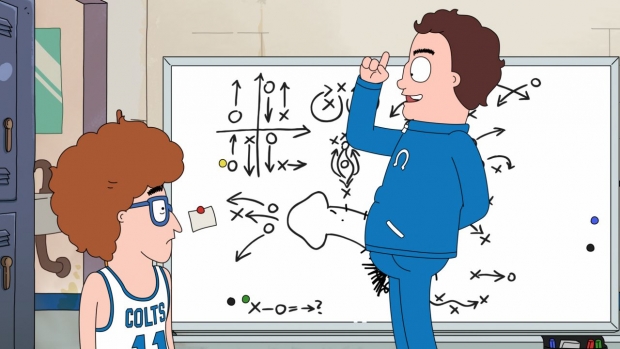 Hoops, a ribald new comedy series from creator Ben Hoffman, premieres on Netflix today, the latest in an ever-expanding slate of animated series launching across the digital interwebs aimed at adults with a taste for cartoons that celebrate the foibles, vanities, and profanity-laced diatribes that mark most people’s lives.

The show centers around a foul-mouthed Kentucky high school basketball coach, voiced by Spider-Man: Into the Spider-Verse and New Guy star Jake Johnson, who’s determined to bully his squad of awful players into a winning team, while pissing off anyone and everyone in his path. Hoops also stars Rob Riggle, Natasha Leggero, Ron Funches, Cleo King and A.D. Miles. Animated at Bento Box, the studio behind the production of hit shows like Bob’s Burgers and Duncanville, Hoops is executive produced by Hoffman, Johnson, Seth Cohen, M. Dickson, Itay Reiss, Phil Lord and Christopher Miller. The show is produced by 20th Century Fox Television.

For Hoffman, known primarily as a TV writer on shows like The Late Show with James Corden and his own The Ben Show with Ben Hoffman, Hoops has provided an opportunity to work in a medium that allows him to riff creatively while at the same time make significant, important changes to the material at almost any time in the production process. “I’m a writer,” he says, “and with animation, it’s amazing that I can get changes made to almost anything, even at the last minute. We can tweak things and get stuff working way down the road. And no matter what I write, I know it can be animated. It’s very forgiving.”

Johnson, whose work on Lord and Miller’s Oscar-winning animated masterpiece, Spider-Man: Into the Spider-Verse, firmly established him as a “voice” to be reckoned with, has been intimately involved with Hoffman on Hoops since the days of the initial pitch…to MTV…which they both knew would not be successful. According to Hoffman, “I pitched MTV a basketball show. I think I forgot to mention that it was going to be R-rated and un-airable, but I didn't really care.  Because I didn't care if MTV picked it up or not.  My goal was for MTV not to pick it up.  And it was one of the few goals in my life that I have achieved.” Johnson remembers working on the presentation, thinking “there’s no way anyone is going to buy this.” So, along with the creator, he figured, “Let’s just go for broke, and make it exactly how we want it to be.”

They made a short pilot, which was rejected. All over town. As Hoffman recalls, “That little pilot went viral all over Hollywood.  Almost like the original South Park holiday video. So, I got meetings all over town that went nowhere.  Until the Netflix meeting, where it went somewhere.” He laughs, noting that it took five years to get from “nowhere” to “somewhere” at Netflix. “We had to wait a long time for Netflix to grow from a DVD rental service to a streaming giant. Which was fine. I remember feeling young and optimistic at the time we first pitched the show, so it obviously took a long time to find a home. Because now I'm an old, pessimistic curmudgeon.”

Johnson was Hoffman’s first, and only, choice to play Coach Hopkins, a role that fits the actor’s tremendous command of comedic timing and his penchant for exasperated, highly emotional yelling. The biggest challenge for the actor on the show has been having to talk loud for long stretches of the voice record. “It’s tough having to talk and yell constantly at high volume,” he explains. “It’s tough on the voice and it’s tough as a character if everything is yelling. But I love basketball and I love this character, so I can handle the shouting.” As acting gigs go, Johnson also notes that he loves working on animated shows. “They’re my favorite, because I get to come to work in shorts and a T-shirt, and spend a few hours doing something fun that I really enjoy.” He continues, “On a live-action set, you’re there all day and all night. You’re there when they’re setting up the food tables and when they’re setting up the lights. There’s no escape.”

Both he and Hoffman took advantage of voice recording with cast ensembles, rather than individual actors, whenever possible, which added important creative energy and opportunities for ad-libbing. “Recording as a group brought a tremendous amount of spontaneity and ad-lib,” Johnson says, “which is always a fun way to record. The dynamic in the room was always great.”

One of the perks of parenthood – raining on your kids’ parade. Here’s hoping you’ll like the show. What do dads know anyway?

Hoops is now available on Netflix.