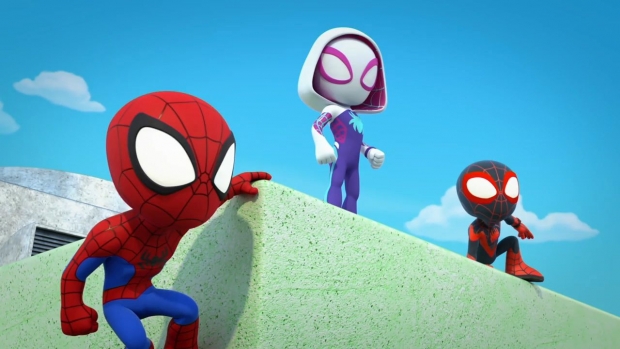 The highly-anticipated series follows Peter Parker, Gwen Stacy, and Miles Morales, who together form "Team Spidey," and their adventures as young heroes who team up with Avengers like Hulk, Ms. Marvel, and Black Panther to defeat foes like Rhino, Doc Ock, and Green Goblin, all while learning that teamwork is the best way to save the day. With naps of course.

The series voice cast includes Benjamin Valic (Sonic the Hedgehog) as Peter Parker, Lily Sanfelippo (The Chicken Squad) as Gwen Stacy, and Jakari Fraser (Ben Is Back) as Miles Morales.

Produced by Disney Junior and Marvel Entertainment in association with Atomic Productions, the show is executive produced by Harrison Wilcox, a Marvel animation veteran with a slew of animated series production credits including Marvel's Ultimate Spider-Man, Marvel's Guardians of the Galaxy, Marvels Avengers Assemble, Hulk and the Agents of S.M.A.S.H., Marvel Super Hero Adventures and Black Panther's Quest, which was nominated for an NAACP Award in the Outstanding Children's Program category. Steve Grover (Hello Ninja) serves as supervising producer; Chris Moreno (Muppet Babies) and Chris Gilligan (T.O.T.S.) serve as supervising director and consulting director, respectively. Patrick Stump (Fall Out Boy) is the series' composer and performs the theme song.

With Marvel's Spidey and his Amazing Friends geared towards preschoolers and their families, the series models the importance of teamwork and helping others as it highlights themes of friendship, cooperation and problem-solving. Wilcox has a hand in every aspect of the show’s production, acting as a “creative overseer” of everything from “developing stories and concepts, to which characters to use, working with the writers to come up with stories, taking that through the record process, the animation production process, all the way to what you see on the screen.” “When we started this project, being my first - and Marvel's first - preschool series, I wondered how that would work,” he shares. “And it turned out once I got in the writers’ room, it was a lot easier than I thought it would be. Surprisingly so, which has to do with the source material. If you look back at the 1960s, Spidey is the original kids’ superhero. So, it's a natural fit for a younger audience. Those old comic book stories have a lot of wonder, excitement, and fun to them. And that adapted well into a show for 3-6-year-olds.”

For Wilcox, the narrative focus was on the older source material rather than more recent Spider-Man or Avenger films. He notes, “We just tried to go back to what was always fun about that character in that world.” As far as whittling down specific stories and characters from both the world of Spider-Man as well as the Avengers, Wilcox explains, “I had a great mentor over the years who always said, ‘Start with what the character wants.’ What does Spidey want? What does Peter want? What does Miles want? What does Gwen want? And we go from there. We build stories around that. Sometimes, we have all three kids in a story, sometimes just one or two and an Avenger as a guest star. Whatever the makeup, we try as much as we can to frame stories around teamwork.” The MCU is vast and getting vaster. It’s likely even toddlers will already be Marvel fans who’ve enjoyed, possibly even been scared to death, of expansive, often visually overwhelming films like Avengers: Infinity War or Endgame. But for many preschool-age viewers, this will be their first introduction to the Marvel world. “You want the show to be fun and enjoyable for kids who’ve never seen another Marvel program of any kind,” Wilcox says. “You hope the show bridges that gap with young kids and the rest of the Marvel and Spider-Man world.”

For some time now Wilcox has wanted to develop and embrace new Marvel fans at an early age. “That's why I took the job working for Marvel,” he says. “My entry point was animation. I always wanted to bring in the next generation of Marvel fans. And this show was the perfect opportunity for that. Disney Junior is the best at what they do because they have this great system in place with an educational department that tests series. They test individual stories with preschoolers and parents of preschoolers. They always focus on making sure that story comprehension is relatable to preschool audiences.”

“There are kids who know a lot about these characters already, and kids that don't. So, we make sure that whether or not a kid knows these Marvel characters, our audience watches a story they can follow, that they understand, and that relates to them.”

“The creative team at Disney Junior has been great,” he continues. “They’ve been great partners. We've learned a lot from them about storytelling for young audiences and conversely, we’ve had a lot of fun being Disney Junior’s guide into the world of Marvel and superheroes. In the writers' room, we have some folks who are lifelong Marvel fans. We have some who have just seen the movies. And we have some who have no Marvel experience, but a lot of preschool experience. We put people with different experiences and backgrounds together; that's how we come up with a really great stable of diverse storytelling.”

The show also deftly deals with an important, fundamental issue involving superheroes – how is justice meted out in the fight for good against evil? And how do you depict good, bad, and evil in a preschool show? “First off,” Wilcox explains, “You don't want to tell overly complex stories. Our motto has been naughty, not nefarious. When we selected villains, we wanted them to have different powers and personalities, but also different motives. And we wanted those motives to be relatable and identifiable to kids. Like they see bad behavior on the playground. We have Dock Ock who wants to be bossy and rule everything. And we have Rhino who wants to take things that don't belong to him. And we have Goblin who just likes to ruin other people's fun. Those are obviously bad things that kids encounter in their lives. And they're presented as bad things on the series.” “But at the same time, we always want to keep it fun,” he adds. “We don't ever want our audiences to be scared of the villains. We want them to laugh at the villains. We still want there to be stakes, but we don't want the stakes to be threatening or scary. We want the kids to have fun while watching the show.”

The series is animated in crisp, colorful 3D/CG by Canadian studio Atomic Cartoons; like so many studios, they quickly pivoted to a safe, remote work pipeline in the face of the pandemic to keep their artists healthy and their shows on schedule. “They're great to work with,” Wilcox notes. “I've worked with them before, and they are as motivated as we are to make the best show possible. In some ways it was a fortunate experience that we were working with them in Vancouver because they were already set up for remote production during the lockdowns of the past year and a half. We were able to adjust quickly and keep production rolling.”
“The show’s animation style lends itself to Spider-Man characters with all the swinging, spinning, and jumping,” he continues. “That really works well with the dynamic camera movements you can do in CG. I couldn't be happier with how it looks.”