Here’s the Skinny on ‘Heavy Metal’ 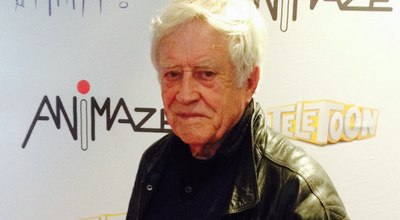 What do you do when you come face-to-face with an Oscar-nominated filmmaker whose career highlights include a stint with the National Film Board of Canada, working with Buster Keaton, animating Yellow Submarine and shaping sequences for Sesame Street?  You grill him about the inconsistencies in his highly influential cult classic, Heavy Metal of course!

The inaugural edition of the Montreal International Animation Film Festival just finished this Sunday, celebrating, among other things, Gerald Potterton’s animated sci-fi flick Heavy Metal.  Made in collaboration with animators in Montreal, New York, London, Ottawa and Los Angeles, Potterton’s feature length riff on the popular magazine has proved to be an enduring cultural touchstone thanks to a rocking soundtrack and colorful visuals. It is equally remembered, however, for its meandering plot, in which a green ball of doom narrates several surreal stories about its evil influence throughout the galaxy.

Following a screening of his 1981 feature at MIAFF, Potterton answered some of the questions Metal fans have been pondering for more than thirty years.  A warning to the uninitiated: spoilers ahead.

James Gartler:  Let’s begin with Loc-Nar, the evil orb and narrator, whose powers seem to change throughout the film. At one point it can destroy people and at another it turns them into zombies. Was that the result of having different teams working on the film simultaneously?

Gerald Potterton:  Yeah, I think so. It had a lot to do with it.

JG:  Can you explain why it blows up in the end? One moment, it’s telling the Taarna story, which is set in the future, and then we see it with the little girl in the past and it ends up exploding…

GP:  Well we based it on the “Fall of the House of Usher.” I think it was an Edgar Allan Poe thing.  They often use it when things burn and blow up at the end. It’s a kind of ongoing thing.

Everything blows up when the house blows up, including the evil. There obviously will be more wars – we suggest that – but we wanted to uplift it a bit at the end. There are so many films now where there is no happiness at all. It’s just death and destruction, A to B. JG:  I think there’s an expectation that the girl will do something specific to destroy the ball. It’s kept her trapped the whole film and then it is destroyed without her using any specific powers…

GP:  Yeah, yeah, it’s a good point. Well in a way, she becomes the young Taarna…

JG:  …which was my next question: is she Taarna or a relative of Taarna…?

GP:  We don’t know. We never explain that! [Laughs]

JG:  Thematically, the film jumps around a bit with each of the vignettes. As director, was there some through-line you wanted to see maintained or was it more about giving each team the freedom to do what they wanted?

GP:  When the producer, Ivan Reitman, and I first met, I knew about the “Heavy Metal” magazine in France and I liked the drawings…some of the stuff. A lot of it was crap, but there was some good drawing. You know – Moebius and people like that. I loved that stuff, but I couldn’t see doing a ninety-minute film just in one style. I really liked the idea of like five or six stories, different stuff, just like in the magazine. That’s what makes it work. You jump around with different styles. They’re not all done in the same style. “Den” is different from “So Beautiful and So Dangerous” and “B-17” and “Captain Sternn.” They’re all different and I like that.

JG:  One of the criticisms people voice about the film is that it could have been more cohesive…

GP:  Yeah, well we did play around with Ivan, chopping the Leica reel – the filmed storyboard. We would try different music on different bits and try having this thing follow that one, so it didn’t take us long to get it to what we have now. And we had to: we had Columbia Pictures saying, “We’ve got to have this thing by July 1981 or forget it. We might pull out!” So you come up against those sorts of things. Some of it is quite crude. There are some rough bits…

JG:  What would you say are Metal’s strongest and weakest moments?

GP:  I like the “B-17” thing, with the airplanes. It was originally called “Gremlins” and was written by Dan O’Bannon, who wrote the original Alien. I’m not crazy about “Den.” I like “So Beautiful and So Dangerous.” I enjoy that. I liked some of the Taarna stuff, like the powerful stuff in the bar, the head chopping. And I always get kind of sad when the bird gets hit. It’s quite upsetting!

JG:  I’m especially impressed with the effects work in the picture…

GP:  Well [director of special effects] John Bruno is one of the top guys in Hollywood now for special effects. He works now with James Cameron and they’re buddies.

GP:  Yeah. It was one style and it didn’t really have the story, for me. The guy, the producer there, he asked me as one of the directors, he said to me one day, “Hey Gerry, you want to have a crack at directing?” I said “No. No thanks.” That was after there had been two or three directors. Ivan is a good filmmaker and he’s a tough guy to work with, but you kind of sense that you’re working with someone who knows what they’re talking about.

JG:  What would you like to see in a sequel? Is there anything you would like brought back from the first film?

GP:  Well it would be fun to see what happens to the young Taarna! Though, of course, you couldn’t do it in 2D. It would have to be done with some amazing 3D.

JG:  Although, one of great things about your original is the variety of techniques used. The house that explodes at the end is live action…

GP:  …we did rotoscoping as well, and there’s a tiny little bit of CG. There’s a shot of the Pentagon and that was CGed a bit. That one little shot.

JG:  Heavy Metal has become a bit like the Fantasia for adolescent boys!

GP:  I know! [Laughs] Speaking of Fantasia, my favorite Disney film has always been Pinocchio.

JG:  Well, it also has a bunch of little adventures…

GP:  The thing about it, too, was the whole thing in those days was about the dangers of falling into bad company, if you’re a little kid. Poor little Pinocchio, he falls in with some bad guys. I think young kids accept that and like that.

Choc Chip Animation Riffs on Pop Culture in ‘The Art of Murder’
F is for Flake: The (Not So) Great Animation Robbery?
Re-VIEW: ‘Avatar: The Way of Water’ – A Miraculous Vision
‘Kung Fu Panda: The Dragon Knight’ Celebrates a Special Lunar New Year
END_OF_DOCUMENT_TOKEN_TO_BE_REPLACED