Executive producer and supervising director Simon Otto talks about Netflix’s new series that weaves together famously dark tales in a fun, entertaining way to help kids understand they can take control of their own destinies. 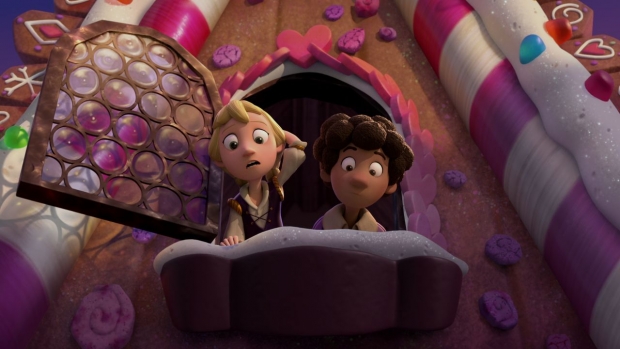 In Netflix’s new CG animated comedy series, A Tale Dark & Grimm, based on Adam Gidwitz’s best-selling book series, Hansel and Gretel run away from home to find better parents...or at least ones who won’t chop off their heads!

In the series, which premiered this past Friday, Hansel and Gretel leave their own story and venture through other classic Brothers Grimm tales; a trio of ravens, tasked as narrators, guide us through the kids’ journey as they encounter witches, warlocks, dragons and even the devil himself. As the siblings roam a forest brimming with menacing foes, they learn the true story behind the famous tales, as well as how to take charge of their destinies and create their own happily ever after. Because once upon a time, fairy tales were awesome.

Otto is best known for a long tenure at DreamWorks Animation that included his role as head of character animation on all three How to Train Your Dragon features, among other projects; most recently, he directed the short film, The Tall Grass, part of Season 2 of the hit Netflix animated anthology series, Love, Death + Robots. He also recently took the helm of Locksmith Animation’s next animated feature, That Christmas, a CG animated adaptation of Richard Curtis’ children’s book series. Looking for new projects after leaving DreamWorks, Otto was contacted by Astro-Nomical Entertainment’s Chris Henderson (one of the series’ co-executive producers), asking him to look at a property they could potentially develop. “He says to me, ‘Hey, I have this IP I’m really excited about. You should read this book,’” says Otto. “It happened to be one of Adam Gidwitz’s novel, which is such a great read. Reading even the first 20 pages, you think, this is fantastic. It's really a great idea.”

As Otto explains, Gidwitz was a substitute teacher, who while reading ‘Grimm’s Fairy Tales’ to kids, quickly realized he might need to inject a bit of humor to help the students sort through the rather dark stories. So, he created an overarching story, pulling together the fairy tales, where a narrator keeps interjecting fun warnings like, “Maybe you shouldn’t be reading this because it’s time for you to go to bed.” Gidwitz eventually traveled around the country telling these stories, his enthusiasm and humor helping students get through some of the more emotional and bleak tales.

“So, I read the book, met Adam, Richie Chavez [art director], Pete DeSève [character designer] and together, we said, ‘Let's develop this into something that works as a series,’” Otto explains. “Then David Henrie [executive producer] came on to write, with his company, and soon our group began developing the project as a limited series. We decided we’d pitch the show, with a specific visual design, as a Grimm’s Fairy Tale story told by an unreliable narrator that keeps undercutting what's happening in the story.”

According to Otto, as they developed the show, they decided to use characters from the story itself to narrate and interact with the audience. “We came up with the idea of three ravens, each with a different take on the ongoing story,” he continues. “There are always different realities with the story. There’s what we witness as the audience… Hansel and Gretel going through these different experiences. Then there are the realities of the storytellers, each correcting the other, none saying the same thing. For example, one says, ‘No, that happened at night, not during the day’ as the background swiftly changes. So, these versions are like multiple levels of a stage play, becoming more real, or more comic and absurd, depending upon what’s actually going on in the story.” The project afforded Otto the opportunity to step back from the day-to-day hands-on animation production he’s done, and still loves to do, for so much of his career, and focus more on early story development, look development, and boarding before everything was handed over to Jam Filled Entertainment to produce the animation. “I was really involved in the conceptualization, but once it got to the floor and was distributed to crews, Jam Filled handled it,” he shares. “At that point, I would see things, give my 10 cents on a regular basis, but wasn’t hands-on directing. But up to that point, for every episode, we broke down the script, we did some keyframes, key visual designs, and ideas on how to execute the story. And then we handed that over. The work Jam Filled produced was amazing, considering how fast this was done, and that it was done during the pandemic. It's an incredible achievement, particularly to us, coming from feature animation, to be able to produce this volume of great looking animation in a remote work environment. That show has a real distinctive look to it, its own visual voice, which I'm really proud of. It's really amazing.”

Otto notes that the show is imagined for kids 10-13 years of age who’ll watch with their families, and at its core, shares different perspectives on things like how parents make decisions, why parents sometimes mess up, and why things happen to kids sometimes that they don’t always understand right away. “In a sense, it’s a generational kind of thing where kids of course experience life through the perspective of kids, but then learn why certain things happened to them for other perspectives,” Otto says. “Our hope is that in the end, this sparks a conversation between the parents that watch it with their children.”

“Fans of Adam Gidwitz’s books, we’re aiming at those fans that just ate up his books,” Otto continues. “We hope to expand on that base certainly, but the show not necessarily for little kids. By having narrators that warn the audience, are you sure you want to watch because this is going to get gruesome, we use humor to share some not necessarily pleasant situations. We use a humorous lens to get to the core of the Grimm stories, which are cautionary tales. These are tales that prepare children for emotions they will eventually experience, but in a safe environment. We believe those darker stories, where the emotions may be complex and uncomfortable, are important for kids to experience through what they read and what they see on television, because it gives them a chance to experience those emotions, become familiar them, and take control of their own stories, in a way that is funny and entertaining, not threatening.”

When asked what the toughest aspect of the production was, Otto describes how it was difficult finding the show’s “tone.” “From an overall writing / story / EP perspective, how do we get to that tone, where it’s fun, funny, has drama, and is visually pleasing?” he says. “Richie, Pete, and I, we're all feature people. How do you make sure that you create a visual look and feel that can be executed at this rate, on a television budget and schedule, which works well? How do you create all these different worlds and environments and scenes, and yet give the audience a full experience and not just something that's cheapened or limited?” Noting the show’s visual vastness, Otto adds, “They're going on a real journey. Every episode has new sets of antagonists, new characters to meet and worlds to travel. It's pretty vast. So that was a real tall order, to be prepared for the production on that scale.”

It’s the “vastness” of Otto’s animated feature film experience that helped him and the production successfully meet those challenges. “The training I got being a big studio animator helps me find out quicker and more successfully what makes something entertaining and appealing,” he says. “Just being surrounded by some of the best artists in the industry, you learn things like how you get there fast, and not lose yourself along the way. How do you know when something is half-baked? If something doesn't work, how do you make it work? How do you give something quality and fill it with humor?”

Noting the biggest difference he’s learned working in TV compared to features, Otto explains, “In features, we're used to having more time for everything. But the big, big difference between television and features is that in feature animation, getting from ‘80% good’ to ‘great,’ that's what takes the longest time. In television, you try to get to that 80% and then move on. What serves me best, my experience as an animator, as a story artist, working in features, is how do you quickly get to something of quality and appeal.”

And to Otto, working without the larger resource base and longer schedule he was used to in features is a refreshing change. “For me, it's liberating, because what you end up doing is caring for your audience more than for your peers,” he says. “You think less about the craft, squeezing that last little bit out of everything. You’re thinking, ‘How does this show communicate?’ I find it liberating to be honest. I felt that way directing an episode of Trollhunters: Tales of Arcadia and a few episodes of Dragons: Race to the Edge. Here’s a script, go do it! What's the most you can get out of it in the time that you're given? So, you're shaping and sculpting something really quickly. And you’re forced to figure out what are the 5 or 10 most important things this needs to effectively communicate to the audience. To me, that was extremely refreshing.”