‘Guillermo del Toro’s Pinocchio’: The First Puppet of His Kind 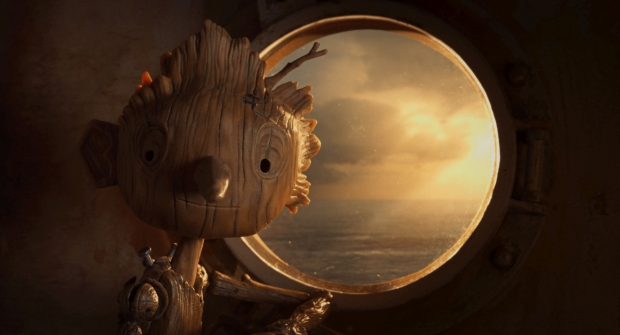 When you hear the name Guillermo del Toro, a cacophonous menagerie of fantastical, dark, twisted, beautiful images come to mind. Perhaps you think of that disturbing dinner with Pale Man from Pan’s Labyrinth, that breathtaking underwater dance scene between the Amphibian Man and Elisa in The Shape of Water, or maybe, for younger audiences, that glittering underground world of trolls in Trollhunters: Tales of Arcadia.

There’s a reason the two-time Academy Award-winning filmmaker has made a name for himself in the world of creating, well, other worlds. And his latest film, Guillermo del Toro’s Pinocchio, now in theaters and arriving on Netflix Friday, December 9, is no exception.

The stop-motion animated musical fantasy film is produced by Netflix Animation, The Jim Henson Company, Pathé, ShadowMachine, Double Dare You (DDY) and Necropia Entertainment. Based on designs from American artist and storyteller Gris Grimly's 2002 edition of the 1883 Italian novel The Adventures of Pinocchio by Carlo Collodi, Guillermo’s adaptation follows the journey of a wooden puppet named Pinocchio (Gregory Mann), crafted out of grief, and brought to life by magic, who joins the circus and then the military in an effort to win the love of his father and maker, Geppetto (David Bradley).

It’s a colorful world–despite taking place in 1930s Fascist Italy–with even more colorful characters, from a horned-haired showman and backpacking cricket to skeletal rabbits and a blue-hued goddess with an eyeball for every feather on her wings. All things considered, a live wooden puppet isn’t the oddest thing viewers will see in this movie. But he is one of the most unique puppets ever constructed. “There are things changing in this field every year, but one big change for stop-motion was the invention of 3D printers,” says Georgina Hayns, Pinocchio’s puppets creative supervisor, director of character animation, and director of character fabrication. “Up until now, metal printers have been good for certain things, but not for the armatures of puppets because the properties and surfaces of the metal haven’t been great. But the technology is now at a point where you can use different metals in printing machines.”

She continues, “So Richard [Pickersgill], our M&S puppet fabricator, was able to print all of the parts of Pinocchio out of a 3D metal printer, then engineer the surfaces so Pinocchio has hinges for knees and those hinges were really nice and fluid for the animators.”

Pinocchio is the only model Hayns knows of in the animation and stop-motion industry whose entire body and skeleton is 3D printed.

“Pinocchio was the first of his kind” says Hayns, previously known for her work on Kubo and the Two Strings and Coraline. “We pushed the boundaries beyond anything I had ever worked on before.” Right from the get-go, on page and in production, the character of Pinocchio was one that was meant to push boundaries.

“Geppetto [is the one who] learns, and this is a big difference with our Pinocchio,” says del Toro. “Normally, in Pinocchio stories, Pinocchio learns to obey, and he learns to be a good boy, and then he turns into flesh and blood. What I wanted very much is for everybody to learn from Pinocchio.”

Del Toro notes that, in the beginning of the film, Geppetto starts out wanting everything, and everyone, to be perfect and wants everything to be “just so.” He has the perfectly charming and obedient son, Carlo, and everybody loves Geppetto because he does what everybody asks of him without a fuss. He lives a quiet and peaceful life, until Geppetto loses his son in a bombing and then begins relentlessly drinking.

In a moment of rage and regret, demanding his son be returned to him from the heavens, Geppetto grossly constructs a puppet–meant to imitate Carlo–out of the bark of a tree planted with a pinecone Carlo had found just before his death.

But when Pinocchio is brought to life, Geppetto does not recognize the wooden boy, whose crooked and wild features resemble nothing of the lost child. “What I've learned as a father and as a son is that the greatest treasure for a son or a father is to be seen,” explains del Toro. “To be able to be seen by the other is so eloquent and moving. And I want to tell that little story in which Geppetto learns to love Pinocchio through the course of the movie, for who he is. Pinocchio is such a pure element, that he changes the alchemy of everybody around him, for good or worse. He irritates the figures of authority, and he wins the heart of his father.”

Hayns adds, “Guillermo literally sat and read us his story right at the beginning. To have the director sit in a small group and read his story and his vision to you, that's what set the tone. Then the animators took all their careers and all their learning and put them into these puppets and yeah, you'll see something different.”

Pinocchio’s model was, in a similar way to his character, a teacher for the modeling and fabrics team, none of whom had experience working with an entirely 3D printed wooden boy. While most of the film’s characters used mechanical faces, the team had a unique challenge with Pinocchio who, once again, strayed from the norm.

“During the early days of replacements on Coraline, we decided to split the faces from the brows and the mouth through the eyeline, and that gives you the ability to have so many more expressions, like Mr. Potato Head, where you can mix and match, and instead of printing a million faces, you only have to print 500,000,” explains Hayns. “But, when it came to Pinocchio, because he's a wooden boy and because of all the woodgrain that’s vertical across his face, having a split mechanical face would be a nightmare to fix in post-production. So, we actually had to address his face in a completely new way.”

While replacement faces would allow more range of expression for Pinocchio’s character–perfect for the context of the film–Hayns also was determined to find an economical approach to creating the puppet’s many faces that wouldn’t add significantly more work for the production. “It was like, ‘Okay, let's look at his design. Is there anything that helps us?’ and we noticed his eyes, these two round wood knots,” shares Hayns. “And so, myself and the head of animation, Brian [Leif Hansen], just sat down one day and went, ‘Well, what if we took these eyes as separate elements?’ So, the eyes themselves are plug-ins. And we can almost create brows with those plugins as well. All it would take is just changing the design a little bit with each face.”

Hayns and Hansen performed a practical test, showed it to Guillermo, and he loved it.

“So, we moved forward with it, and that's the Pinocchio we have in the film,” says Hayns. “He's got incredibly expressive eyes, you've got all these squash and stretch eye shapes, you've also got the brow that we created with the negative line between the plug and the socket, but then you've got all these mouths as well. There’s a lot to him.”

But the most important ingredient to Pinocchio’s model, along with all the other character models, was the love that was put into the design. According to del Toro, “to animate is not to move a puppet. It’s to infuse it with a soul…to make it live.”

“You can tell in the eyes what the puppet is thinking.” he says. And, even with wooden knots for peepers, Pinocchio’s eyes are some of the most expressive in the whole film.

“The performance that you get out of those puppets is absolutely astonishing,” says Hayns. “You can tell we all loved working on this movie. The love that went into making this film, and understanding the importance of giving everybody on the team as much information and knowledge as anybody had so nobody ever had to say, ‘Well, nobody's told me that,’ or ‘I don't know what I'm doing,’ or ‘I don't have the right tools to make what is being asked of me,’ it was just such a wonderful project to work on. Even with stop-motion production teams in the UK at Mackinnon and Saunders, as well as in Portland, Oregon and Guadalajara, Mexico, Hayns says she has never worked on a project where a team has worked so fluidly together.

“We literally held hands every day and made this film through the pandemic, across oceans, across continents,” she notes. “You're going to watch this film and you're not going to care about what technology was pushed. It’s not about that. It’s about the end result. It's about the beautiful story that's being told that relates to what's going on in the world around us at the moment, but in a very cool, sensitive, beautiful way.”