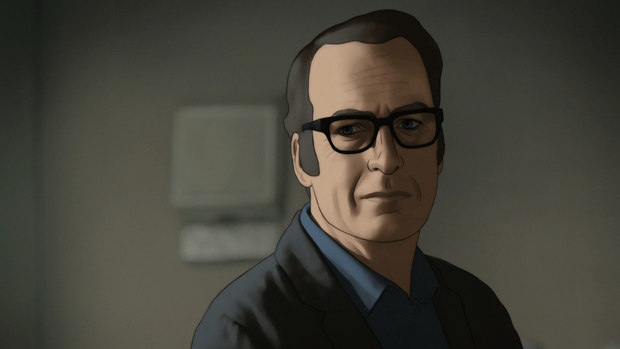 Rotoscoping – a process that allows animators to convert live-action footage to hand-drawn animation – has been around for more than century. Invented by animator Max Fleischer in 1915 and used extensively in his innovative Out of the Inkwell series, rotoscoping has been employed in Disney films, classic Warner Bros. cartoons, and such landmarks as the Beatles’ Yellow Submarine and Ralph Bakshi’s animated features of the late 1970s and early 1980s. More recently, director Richard Linklater used the technique in his ambitious features Waking Life (2001) and A Scanner Darkly (2006).

Now Austin-based animation studio Minnow Mountain has achieved new heights for rotoscoping in their work for Undone, Amazon’s first original animated series for an adult audience. Co-created by BoJack HorseMan creator Raphael Bob-Waksberg and writer Kate Purdy, and starring Rosa Salazar and Bob Odenkirk, Undone is the story of a woman who finds she has a new relationship with time after surviving a near-fatal auto accident.

Minnow Mountain was co-founded by Steph Swope and Craig Staggs in 2012, when they began work as animation producer and director, respectively, on Tower (2016), an Emmy-winning feature documentary about the 1966 University of Texas shootings. Their sensitive and nuanced performance capture animation in Tower caught the eye of the producers of Undone, including executive director Tommy Pallotta, with whom Staggs had previously worked on Linklater’s A Scanner Darkly, and they were invited to join the creative team.

AWN recently caught up with Swope and Staggs, who talked about the challenges and triumphs of working on Undone, and discussed the finer points of rotoscoping – beginning with what distinguishes their work from other rotoscoping efforts. “There's an important distinction between creative rotoscoping and technical rotoscoping,” Staggs explained. “We do what we call performance capture rotoscoping, which is hand-drawn frame by frame, with the animator working to portray the emotional part of the story through the drawings. This is different from technical rotoscoping in a superhero movie, where you're using pixels and software to track an area for compositing. So the term can be used for both things, which is why we prefer the term ‘performance capture’ – because what we're really doing is working with an actor to create a performance.”

“We do a lot of small character adjustments – you might slightly age a character, or change something about their appearance,” she contined. “And we do an interesting thing at Minnow Mountain in our approach to a motion, where we’ll draw motion blur, and we'll squash and stretch out a character within a scene. A lot of animation houses just work really, really hard for realism and they try to eliminate the motion blur, while we kind of embrace it as a photographic, a cinematographic artifact.”

Turning from the details of their creative approach to where they fit into the production workflow, Swope explained that they’re the second step after the live-action footage is shot and edited. When they’ve completed the line work, it gets sent to Submarine Animation in Amsterdam, who adds color and composites all of the elements, including the oil paintings that are used as background art. With regard to how creative decisions are made during this process, Swope said that she and Staggs check the animation before it’s sent to Submarine to make sure that “we’re  getting the emotion we want and that we’re not having any technical problems, like lines wiggling when they shouldn't. And then we go through it with Hisko Hulsing, the director, who’s also based in Amsterdam. Does it work emotionally for him? Does it work technically for Submarine? Are we all happy with what we're conveying? The micro-expressions are our bread and butter, so we want to make sure that stuff is right on.”

Staggs shared that there was very little preliminary work before they dove into Undone. “Hisko had a pretty strong vision and there was a pretty distinct visual look from his original drawings. Before production, we produced just one 60-second test, and that was about it. We then went into a design process for characters and started to define things, but the next bit of animation that happened was for production.”

When asked about the most challenging aspect of the production, Staggs and Swope don’t have to spend much time thinking about it. “The biggest challenge in Undone was the scale and the size of the project,” Staggs noted. “For Tower, we produced just 40 minutes of animation during a year-long production period. For Undone, we produced eight 22-minute episodes in about a year and a half. It was a challenge scaling up not only in volume, but also in production value, compared to a feature film that was a one-off and a bit looser in style. For a series, you have to produce each episode so that the characters remain consistent and relatable through the whole series. We worked with a bigger team and a bigger pipeline than we'd ever used before.” “We went from a two-person team, just Craig and I, to 24 people,” added Swope. “Tower was 16 people total, and we had a lot of part-timers because it was independent. We kind of made do with what we could get in terms of people. For Undone, we couldn't just become a big factory. It had to be a factory of artists, which is different.”

“It’s an experimental show,” Staggs continued. “The pipeline was created for Undone and there's no other animation pipeline that mirrors it. And it happened pretty fast. It was a big challenge because we were developing the techniques that we would use and creating the artwork all at once throughout that year and a half of production. So you didn't know what the background painting was going to look like because it hadn't been painted yet. You didn't know what the color treatment would be on the characters. And all of that came together simultaneously to create what you see in the final result. No one really had a complete sense of an episode, or of the series, until it was delivered – at which point it turned out beyond our wildest expectations.”

Asked for final thoughts, Staggs expressed an appreciation not uncommon in the world of animation: “Each frame of Undone represents the work of dozens of creative people just doing their best and working at the top of their game, in Los Angeles and Austin and Amsterdam. And I love that social media allowed us to actually get to know these people. In addition to the joy of the work, that’s what’s really exciting about our experience as animators.”

‘Josee, the Tiger and the Fish’: Embracing People with Disabilities in Anime
‘Dune’: The Inner Workings of Ornithopters, Sand Worms, and Creative Moviemaking
Re-VIEW: ‘Encanto’ - Seeking Beauty in Truth
WetaFX Delivers a Monstrous 3rd Act for ‘Shang-Chi and the Legend of the Ten Rings’
‘The Spine of Night’: Redefining Fantasy and Animated Filmmaking
Luma Pictures is Well Suited to ‘Eternals’ VFX Production
‘The Musician’: Celebrating Human Resilience with Cutout Animation
Plague Diversions: Gazing at the Shortlist for the Best Animated Short Oscar
END_OF_DOCUMENT_TOKEN_TO_BE_REPLACED