‘Green Eggs and Ham’ Serves Up a Tasty Second Season

Executive Producer Helen Kalafatic talks about the new season of the beloved Dr. Seuss-based series, debuting April 8 on Netflix, and encourages LatinX and other underrepresented groups to find their place in the animation industry. 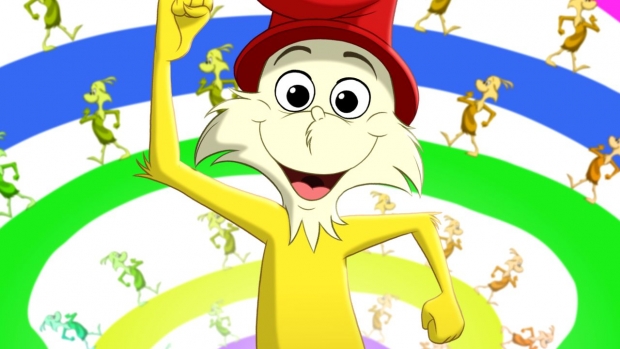 If you savored Season 1, now it’s time to have more fun.
Sam and Guy, two stalwart men, on April 8 come back again.
Animated in 2D, The Second Serving you must see.
Even if you hate green food, Season 2 is really good!

It all started when a rare chickeraffe went missing from the Glurfsburg Zoo. Perpetrated by Sam-I-Am (Adam Devine), who intended to return the avian creature to its natural habitat, the event launched Sam and his companion Guy-Am-I (Michael Douglas) on a series of hair-raising and hilarious adventures in a Dr. Seuss-inspired world populated by a cast of colorful characters. Featuring the voice talents of Ilana Glazer, Diane Keaton, Keegan-Michael Key, and Eddie Izzard, among many others, the first season of Green Eggs and Ham earned a 100% rating on Rotten Tomatoes, acclaimed both for its narrative inventiveness and its beautiful animation.

But wait… there’s more! A brand-new 10-episode Season 2, Green Eggs and Ham: The Second Serving, drops today, April 8 on Netflix, continuing Sam and Guy’s saga, with adventures that take them around the globe and outside their comfort zone. With a plot based in part on Dr. Seuss’s 1984 antiwar story "The Butter Battle Book," the new season features an unsolved mystery, a new beginning — and spies!

Check out the show... then on you go!

Among those looking forward to the new season is executive producer Helen Kalafatic, who says that, while many things that made the first season so successful are carried over to The Second Serving, there are a number of changes – both on- and off-screen – that distinguish the sophomore outing. “The relationships between our main characters have grown, and there are new characters playing key roles in the new storyline,” she shares. “Visually, the art direction evolved without completely departing from what we established in Season 1.  In Season 1, we produced an episodic show utilizing feature methodology, and we replicated what worked well in Season 2. We also gained a better sense of how to partner with and support our vendors, for example, in the development of brushes and tools, and improved communication.”

Asked whether in the beginning there had been any trepidation among the creators in taking on such a hugely iconic property, Kalafatic says that, given the professionalism of the entire team, and the respect that everyone had for the source material, it was never really an issue.

“The creator of the show, Jared Stern, the writers, and all the artists did a great job expanding on the book,” she elucidates. “The whole team was phenomenal and stayed true to the essence of the Seuss characters, while simultaneously making them appealing and animatable. We incorporated ‘Seussian-isms,’ made design choices that were sometimes unusual, but still within the world, and we made sure that nothing felt too forced.”

In particular, she credits art director Bill Perkins, episodic directors Bradley Raymond and Piero Piluso, editors Margaret Hou and Mark Rosenbaum, and legendary composer David Newman with ensuring that every episode, and the production as a whole, was both true to the source and exemplary in its own right.

As far as specific production challenges, Kalafatic explains that the one overriding challenge derived from the fact that Green Eggs and Ham was an episodic production built and executed like a movie.

“The sheer volume of work at a high-quality level impacted every aspect of the production,” she relates. “For example, the amount of material that passed through our pipeline was bananas. The hours spent reviewing and noting every shot through every phase of production was staggering. Season 1 was a total of 325 minutes, which is equal to four feature films. Season 2 was 250 minutes. And of course, there were the challenges brought about by the pandemic.” A challenge Kalafatic faced earlier in her career had nothing to do with the volume of material or the emergence of a novel coronavirus, but with her being a woman – and a Latina. While acknowledging that groups like Women in Animation (WIA) and LatinX in Animation (LXiA) are taking an increasingly active role both in drawing attention to issues, as well as providing ideas to help the industry move forward proactively, she has sometimes experienced bias over the course of her career. At the same time, she can also point to genuine milestones in terms of equality.

“The industry is changing for the better. Previously, I have had my challenges as a woman and, more specifically, as a Latina,” she says. “I look forward to a time when issues surrounding inclusivity and diversity no longer exist, but for now it’s great to see the industry making progress. I think one of my proudest moments on Green Eggs and Ham was during the overlap of seasons, when our line producer told me we were at 50/50 gender parity. This happened very organically, and remembering this always makes me smile.”

Asked whether she benefitted from any mentors in her career, Kalafatic said that, while there were many people who inspired her and from whom she learned, she never had an actual mentor. However, she’s encouraged by the growing number of organizations offering mentorship opportunities – including LXiA, WIA, and the National Association of Latino Independent Producers – and that she loved meeting with a small group of NALIP mentees, and still enjoys being a source of encouragement for some of them. As for what advice she would offer young professionals or students – especially women, women of color, and LGBTQ+ individuals – who are trying to build a successful career in animation, Kalafatic says that their unique perspective, POV, and inclusion in the process is vital.

“It is the only way we can create that which reflects what our world looks like today, and what it will resemble in our future,” she affirms. “Everyone is entitled to a seat at the table. Be confident and ask for what you deserve. If you ask and don’t get the exact result you had envisioned, trust that placing value in yourself today will help you reach your goal in your future. Along the way you will find your advocates, allies, and supporters. And sometimes circumstances will forge professional relationships that blossom into personal friendships and, if you are lucky, they will last a lifetime.”

Animated Characters: The Art of Babbitt – Part 1
Bruce Smith and Ralph Farquhar Talk ‘The Proud Family: Louder and Prouder’ Season 2
VFX is the ‘Thing’ for Tom Turnbull on Tim Burton’s ‘Wednesday’
We Need to Chat
Choc Chip Animation Riffs on Pop Culture in ‘The Art of Murder’
F is for Flake: The (Not So) Great Animation Robbery?
Re-VIEW: ‘Avatar: The Way of Water’ – A Miraculous Vision
‘Kung Fu Panda: The Dragon Knight’ Celebrates a Special Lunar New Year
END_OF_DOCUMENT_TOKEN_TO_BE_REPLACED